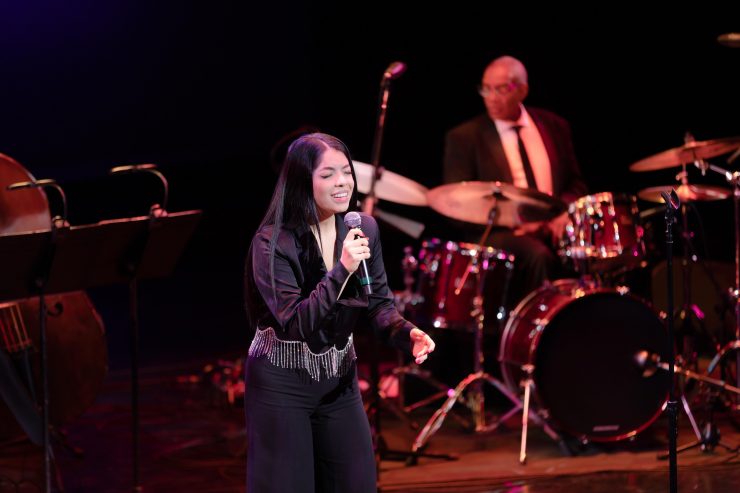 Lucia Gutierrez Rebolloso grew up in a musical atmosphere, singing son jarocho, aka “Veracruz Sound”, with her family’s band in Veracruz, Mexico. Son jarocho, which originated on the Gulf Coast of Mexico, is a mixture of Spanish, African and indigenous Mexican influences. “My parents always took jazz musicians to play with them,” she recalled, “because jazz musicians can be very versatile. So, in a way, jazz kind of found its way into my life. It approached me, I guess.”

While preparing for the ‘SASSY Awards’ finals, the 21-year-old Rebolloso remembered that, “years ago, in one of my recitals, I performed ‘Donna Lee’. So, I decided I’d like to try this arrangement again. I thought it could be something transformative that I could sing with a trio. I adopted the arrangement that we originally did for guitar and voice and did it with a trio, and it worked. It was challenging in a way because there are a lot of notes and a lot of syllables, but it was a very fun tune to do.”

One of the Mexican jazz musicians who performed with Rebolloso’s parents was the late bassist Aleph Castaneda, a teacher at the Universidad Veracruzano, which Rebolloso eventually attended. “The first person he introduced me to,” she recalled, “was Johnny Hartman. And then I started listening to Billie Holiday, Ella, and I said, ‘Wow, this is magical.’ And I fell in love with it. In time, I felt more and more closer to jazz, very connected to this genre.” Castaneda performed with several well-known jazz musicians including tenor saxophonists Melissa Aldana and Joe Lovano and vibraharpist Warren Wolf.

Rebolloso considered “Donna Lee” her uptempo number at the awards presentation. She preceded it with Cole Porter’s “You’d Be So Nice to Come Home To” and followed it with “What a Diff’rence a Day Makes”, made popular by Dinah Washington and originally written in 1934 by Mexican songwriter Maria Grever in Spanish. The title was “Cuando Vuelva a tu Lado” (“When I Return to Your Side”). Rebolloso sang the first section in English, “and then I did it in Spanish with a different feel to it. And, I could dance to that. It made me feel very good on stage. I guess it worked.” The song, Rebolloso said, “has something to do with my culture, but it’s not just something out of the blue. Everybody recognizes the tune. Dinah Washington, Ella, Natalie Cole all recorded it.”

“You’d Be So Nice To Come Home To”, Rebolloso added, “represents the situation I’m going through now. I was in the process of moving to Los Angeles, but now I feel I need a little bit more time.”

In 2018, Rebolloso and her family were invited to participate in the HBO documentary, Fandango at the Wall, a film that features Arturo O’Farrill and his Afro Latin Jazz Orchestra playing with some of the best son jarocho musicians in the world. In the news release for the documentary, O’Farrill pointed out that the film was designed to tear down three types of walls: “physical walls, as we recorded musicians on both sides of the San Diego and Tijuana border; musical walls, as we invited special guests from different musical traditions such as jazz, classical, Broadway, hip hop, son jarocho; and recording borders as we recorded both outside in the live environment and also in a recording studio.” Fandango at the Wall, Rebolloso said, was “a beautiful documentary. It’s very meaningful to our culture. It was a special experience, and I was happy to be a part of it.”

As incredulous as it might seem to those in the audience at NJPAC, Rebolloso was once “way too shy to be able to move on stage,” but watching Sarah Vaughan, she said, helped her overcome that nervousness. “She joked about some things and made the audience feel comfortable. This past month, I have been obsessed with other singers that have that same quality. People have to be connected with the performer.” Winning the Sarah Vaughan award, she added, “feels like I’m in a dream. It was a very special moment, and I’m very grateful to be a part of this. I’d like to thank all the people at the festival.”

The contest was open to singers over the age of 18, of all genders and nationalities, from anywhere in the world who have not been signed by a major label. Entrants were judged on vocal quality, musicality, technique, performance, individuality, artistic interpretation, and the ability to swing.–SANFORD JOSEPHSON 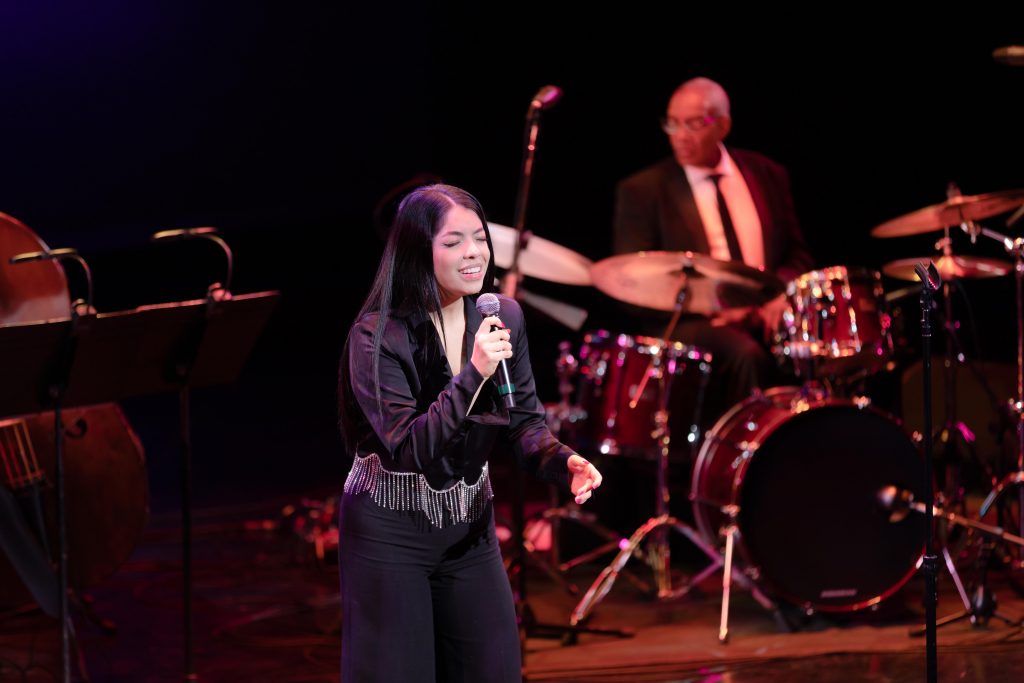