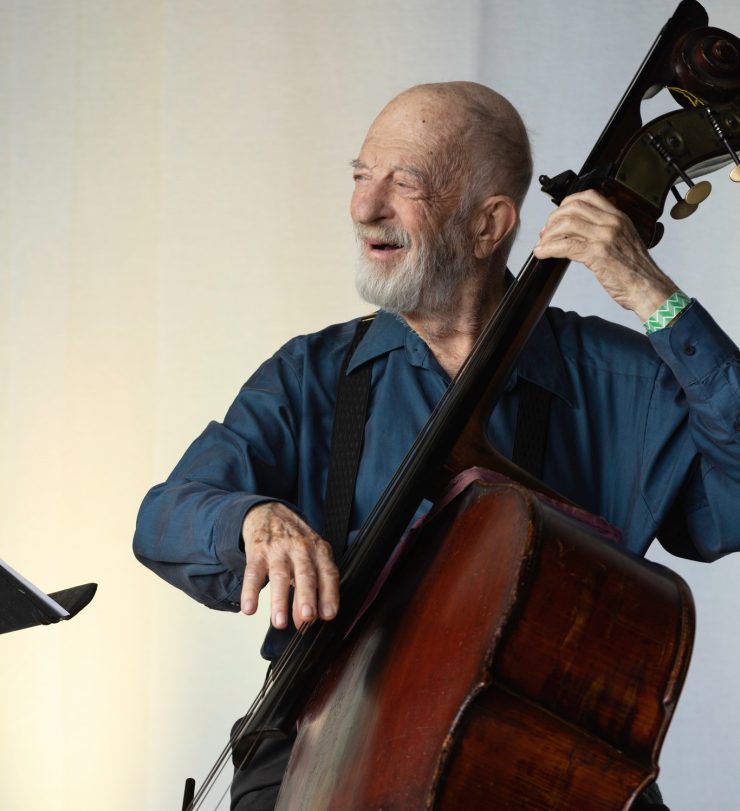 Fifty years ago, two New Jersey jazz fans, Bill Cleland and Jack Stine, founded the New Jersey Jazz Society. Cleland was an avid jazz fan, but the driving force was Stine, and, if not for his leadership, NJJS would probably not have been created.

Despite the fact that Stine wasn’t a musician, veteran cornetist Ed Polcer would refer to him as “The Bandleader”. “We were a happy bunch of souls with one thought in mind,” Polcer told Jersey Jazz shortly after Stine’s death at the age of 96 in June 2018. “There were doctors, teachers, lawyers, an ice cream truck route man, a mechanical engineer, and a liquor store owner.” It was the liquor store owner, Jack Stine, who molded the group into an organization to promote live jazz.

Prior to the founding of NJJS, New Jersey jazz fans would meet at the Chester Inn to hear drummer Chuck Slate’s Traditional Jazz Band or at the Hillside Lounge (also in Chester) to see cornetist Wild Bill Davison or guitarist Al Casey, who had played with Fats Waller. The New York Times’ John S. Wilson visited those jazz rooms in 1972 and wrote, “If there is such a thing as a ‘jazz center’ in New Jersey, it must be here.”

The New Jersey Jazz Society was organized in October 1972. According to a December 1, 1974, article by The New York Times’ Ray Warner, “the NJJS members would turn up to hear pianist Jimmy Andrews at O’Connor’s Beef and Ale House in Watchung or Chuck Slate at the Widow Brown’s in Madison, or perhaps Bucky Pizzarelli on Monday (guitar night) at Gulliver’s in West Paterson. These are among the half dozen or so Jersey places regularly presenting small jazz groups these days.”

Al Kuehn, Producer of the annual Chicken Fat Ball in Maplewood, remembers the first big NJJS concert, at Fairleigh Dickinson University on September 30, 1973. “Dick Wellstood, Don Ewell, and John Eaton all played, and Eubie Blake showed up,” he recalled. “I was the youngest guy there, so I’m still a survivor.”

Throughout his career, which began in the 1950s, Crow has played and recorded with a long list of jazz legends including Bob Brookmeyer, Benny Goodman, Marian McPartland, Gerry Mulligan, and Clark Terry, among many, many others.

When he joined the Army in 1946, Crow played baritone horn, valve trombone, and trap drums in the 51st Army Band at Fort Lewis, WA. In January 1950, he moved to New York City. In the summer of 1950, he was hired as a trombonist for a job in the Adirondacks and was talked into learning to play the string bass. “By the time the summer was over,” he said, “I could play the bass well enough to take gigs in New York City, and every gig was another lesson.” He remembers when he started playing professionally and would attend a jam session. “I didn’t own a bass,” he said, “so, I would wait until the bass player was tired. Then, I would borrow his. The bass player would get tired because there was one bassist and 10 saxophonists.”

Crow loves to reminisce about his years with McPartland at 52nd Street’s Hickory House, recalling that Duke Ellington used to hang out there. “Marian used to coax him to come up and play with us once in awhile,” he said. “I stayed with Marian and (drummer) Joe Morello for about 2 ½ years. I left because Gerry Mulligan wanted me to play with his sextet, and I couldn’t turn that down. That lasted for about a year, and then I went back with Marian. By that time, Joe had gone with Brubeck, so Dick Scott was the drummer. I was there another year, I guess. We used to take off from the Hickory House in the summertime and do a couple of out-of-town gigs at Baker’s Keyboard Lounge in Detroit, and then in Columbus, Ohio, at a place called the Grandview Inn. Then, I got busy with Gerry again.”

Crow became a part of Gerry Mulligan’s Concert Jazz Band in the early ‘60s, joining the band when “it couldn’t have been hotter. It was at its peak. With Clark (Terry) in the trumpet section and (Bob) Brookmeyer in the trombone section, and Gerry in the saxophone section, we could open up every chart we wanted to. And, if somebody was playing a good solo, Gerry would go into quartet mode. It was really great. I loved that band.”

Carl Maraghi, a baritone saxophonist influenced by Mulligan, played with Crow at Dizzy’s Club in January 2020. “In every set,” Maraghi said, “I made sure Bill had a few minutes to tell a story. This man is a treasure to our community, the jazz world, and beyond.”

Crow currently plays with young keyboardist Leonieke Scheuble and her drummer father Nick Scheuble in the Generations of Jazz Trio. When the trio was featured in the June 2021 issue of Jersey Jazz, Leonieke said, “What I love most about playing with Bill Crow is that it’s 50 per cent playing and 50 per cent stories. He told me about playing with Stan Getz when the string on his bass broke, so he took one from under the piano.”

As a young man serving in the Air Force in Germany, Person played on weekends with members of the Seventh Army Band – trumpeter Don Ellis, fellow tenor saxophonist Eddie Harris, pianist Cedar Walton and multi-reedist Leo Wright. After leaving the service, he studied jazz at the University of Hartford’s Hartt College of Music.

In 1968, Person teamed up with vocalist Etta Jones for a partnership that lasted more than 30 years until Jones’ death in 2001. “Those were great years for both of us,” he said. “I’d always dreamed of having a band with a vocalist. When we got together, it just worked for us. It was a lot of fun.”

Bassist Matthew Parrish, currently a member of Person’s regular quartet, was a big fan of Person and Jones in the 1980s when they hosted Brunch at the Blue Note. “I used to go see them all the time,” he said. “For me,” he added, “Houston is probably the greatest vocal accompanist alive. And, that translates to when he doesn’t have a vocalist. He becomes the vocalist. That’s what’s so beautiful about his playing. What’s so special about it.”

Parrish recently recorded a new album (so far, unnamed) with Person, pianist Larry Fuller, drummer Lewis Nash, and guitarist Russell Malone. Fuller has played with Person “many times over the years. I believe the first time I heard him live I was in high school, and he played at a club called Dummy George’s in Detroit with his group featuring the great Etta Jones. This would’ve been in 1983, and I was knocked out to hear his huge sound in person and his incredible soulfulness and command of the blues, which came through in everything he played. Houston,” Fuller continued, “collects original sheet music of standards and American Songbook tunes, and he told me he learns the lyrics to every tune he plays.”

Tenor saxophonist/flutist Don Braden admires Person “because of his saxophone tone. The first time I heard him live, in Paris in the ‘90s, I thought, ‘I want a sound like that one.’ So, the next time I went to London, I bought a Lawton mouthpiece, the same brand that he plays. I played it for many years. Houston’s tone is very inspiring – his soulfulness as a player, his positive energy. And, he usually has a smile on his face.”

In addition to Parrish, Person’s regular quartet members are pianist Lafayette Harris and drummer Vince Ector. However, “I get a lot of calls from a lot of people wanting me to play with them,” Person said, “and I do it because I want to stay active and have fun with the music. I want to keep up with what everybody else is doing.” Person’s sound is often compared to that of Ben Webster and Gene Ammons, but he said, “Illinois Jacquet was my initial influence. And Lester Young.”

Person lived briefly in Nyack, NY, and during that period he played some gigs with Crow, who lives in New City. “There was a trumpet player named Fred Smith who lived up in Peekskill,” Crow recalled, “and we did some concerts that Houston played in. Then, Houston called me up and hired me for a couple of gigs.” Said Person: “I would like to congratulate Bill Crow. He helped me a lot and was always there when I lived in Nyack. His humor is keeping us laughing. I’m glad that you all are recognizing him, and I thank the New Jersey Jazz Society for letting me smell a few of the roses before I leave here.”

On Sunday, October 9, from 2-5 p.m., the New Jersey Jazz Society will be paying tribute to Crow and Person at a special 50th Anniversary Benefit Concert in Saint Elizabeth University’s Dolan Hall, 2 Convent Road in Morristown. Tickets, which are $35 for adults and $15 for students can be order by logging onto www.njjs.org. 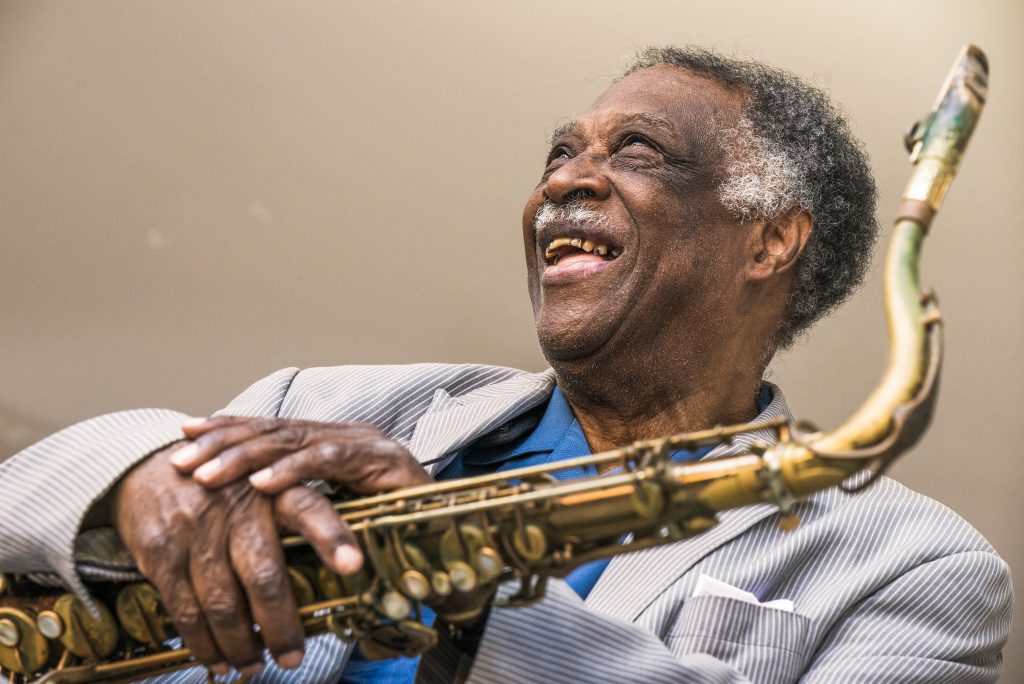