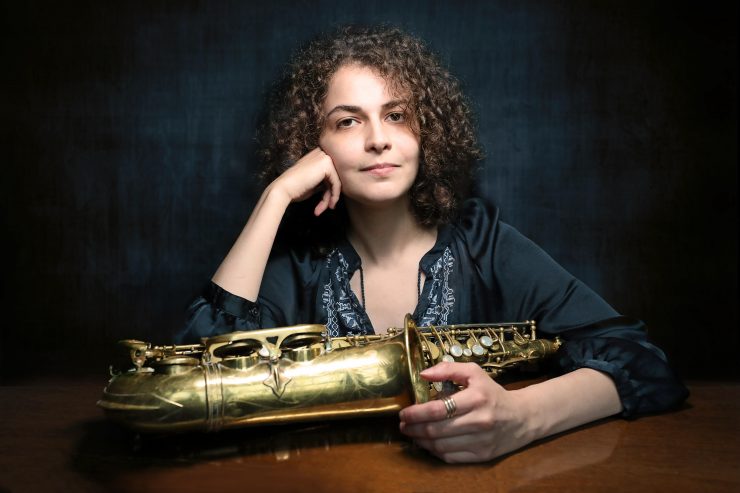 **Complimentary September Jersey Jazz Content** This is one of two articles from the September 2022 issue of Jersey Jazz Magazine being made available to everyone. For complete access to all articles in our award-winning Jersey Jazz magazine, please join the New Jersey Jazz Society by clicking HERE.

In April 2019, alto saxophonist Zoe Obadia sat in with the Bill Charlap Trio to play Dave Brubeck’s “Time Out” at International Jazz Day. “I was definitely very nervous to sit in with such an established and refined trio,” she said,” but I had fun and felt very supported on stage and off.” Said Charlap: “She is a natural talent with a beautiful sound.”

Obadia, who will turn 26 this month, grew up in Glen Ridge, NJ, and learned about music from her father, Yves Obadia, a guitar instructor. “We would listen to a lot of different types of music when I was younger,” she recalled, “and I think I was always drawn to jazz, even though I wasn’t aware of any specific records until I started playing the saxophone.” She was asked to pick an instrument in the fourth grade at Ridgewood Avenue Elementary School and chose saxophone in order to play in the jazz band.

Pianist/educator Janet Lemansky visited Obadia’s elementary school jazz band one year, and, as a result, Obadia attended her Montclair-based JazzConnections camp. While there, “I was in Geri Allen’s combo as an 11-year-old,” she said, “and even though I was too young to really gain a lot musically from that experience, it meant a lot to be around a master musician who was so encouraging of us, even as complete beginners.” Obadia’s elementary school band teacher was Erica Schwerin, who “made rehearsals fun and also noticed that I loved playing. She was very supportive and gave me opportunities to challenge myself musically.”

In middle school, Obadia began taking private lessons from Montclair-based tenor saxophonist Mike Lee, and “he helped me improve a lot in a short amount of time. His method helped me start to understand what was actually happening in solos I heard on recordings; and he gave me challenging assignments early on, like learning bebop melodies in all the keys. He helped me understand the work I would need to do in order to play authentically.” Lee told me that Obadia “was a determined student throughout middle school and high school. Her focus, drive, preparedness, and boundless creativity allowed her to develop a mature improvisational ability at a young age that has only deepened as she has developed into a seasoned professional.”

Jazz House Kids also had a big impact on Obadia. “I studied with a lot of people at Jazz House Kids who had a big influence on me,” she said. Those teachers included alto saxophonists Bruce Williams and Julius Tolentino as well as keyboardists Michelle Rosewoman and Radam Schwartz and bassist Andy McKee. This past summer Obadia was on the JHK Camp faculty, but she worked as a teaching assistant at the camp for five years after graduating from Glen Ridge High School in 2014.

When Obadia began studying and playing jazz saxophone, her major influences were Sonny Stitt and Charlie Parker. “Sonny Stitt was helpful,” she said, “because his language is very digestible, and I just liked his sound and the singing quality of his playing. Charlie Parker has always been very inspiring for me, as he is for all alto players and musicians. There are a few solos of his that I learned early on that I still play regularly in my practice. His phrasing is so creative and logical and feels very natural and free at the same time.” Other influences include Jackie McLean, Kenny Garrett, Gary Bartz, Lee Konitz, John Coltrane, Wayne Shorter, Charles McPherson, and Sonny Simmons.

“Prestige-era Coltrane was a big influence on me early on,” she explained. “I’ve always been drawn to practicing lines, and his lines are very concise and beautiful; and I like the earnest intention behind his playing. I was really drawn to Wayne Shorter in high school because I felt like I could connect with his playing emotionally, and I like the vulnerability, honesty, and rawness of it. Recently, I have been listening to a lot of Charles McPherson and Sonny Simmons. I like them for similar reasons. They’ve very honest and intense players, and I like both of their sounds.”

While in high school, Obadia played in the Essentially Ellington competition and the Mingus festivals with the Jazz House Kids Big Band and was a 2014 Grammy Jazz Band member, a 2014 Young Arts Jazz finalist, and a DownBeat High School Soloist winner. “Jazz House Kids,” she said, “was a special experience because of the caliber of musicians who teach there. The big band rehearsed every week for two hours, and we participated in competitions, so it was good to get that experience of seriously working on music.”

After high school, Obadia attended Juilliard and earned her Master of Music degree. At Juilliard, she studied with saxophonists Ron Blake and Dan Block, “who both gave me tools to develop my sound and function as a professional saxophonist. I also studied with (drummer) Kenny Washington for a semester, and we played duo during our lessons. Playing with such a master and being able to focus on just the drums was really valuable, and I think it helped my playing a lot. I also spent more time composing and arranging at Juilliard, which helped me as a bandleader.” In 2017, Obadia was selected to play at Rose Hall as a member of Jazz at Lincoln Center’s The Future of Jazz Orchestra, a band picked by Wynton Marsalis that consisted of younger players and some veterans such as Block and trombonist Vincent Gardner.

Earlier this year, Obadia performed with pianist Dabin Ryu’s band at the Jazz Gallery and was part of the Young Monk project at Dizzy’s Club, in a band that included vibraphonist Joel Ross, pianist Sean Mason, bassist Mark Lewandowski, and drummer Kayvon Gordon. (Sean Mason was the Rising Star in the October 2021 issue of Jersey Jazz). “I was really grateful to play with such great young musicians,” she said, “and I think we came together as a band well, interpreting Thelonious Monk’s music.”

This summer, Obadia was part of a Cole Porter Songbook concert at Dizzy’s along with Broadway singers, bassist Russell Hall and drummer Evan Sherman; she played with trumpeter Andrew Wagner at Brooklyn’s Ornithology jazz club; and performed at Joe’s Pub with singer/songwriter Julian Fleisher. On September 8, she’ll be appearing with bassist Liany Mateo’s quintet at JALC’s Jazz in Times Square, followed by an October tour with Ryu. And, she has formed her own quartet with pianist Micah Thomas, bassist Felix Moseholm, and drummer Kayvon Gordon. They performed at St. Paul’s Chapel in New York City’s financial district on June 21in a concert arranged by Jazz House Kids. Future gigs will be announced soon.

In 2017, saxophonists Peter and Will Anderson established the Joe Temperley Juilliard Scholarship in memory of the late baritone saxophonist. Obadia was one of two scholarship winners that year. Said Will Anderson: “My brother Peter and I specifically chose Zoe to be the recipient because Zoe is a fantastic player and very thoughtful musician. Even more importantly, she carries herself with a refreshing sense of humility. You will be hearing great things from her in the future.” –SANFORD JOSEPHSON