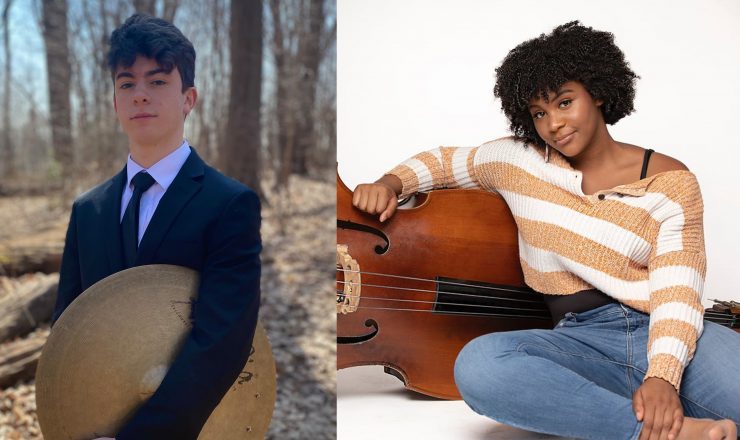 **Complimentary July/August Jersey Jazz Content** This is one of two articles from the July/August 2022 issue of Jersey Jazz Magazine being made available to everyone. For complete access to all articles in our award-winning Jersey Jazz magazine, please join the New Jersey Jazz Society by clicking HERE.

Ben Schwartz walked into his kindergarten class at the Marshall Elementary School in South Orange, NJ, and spotted a tiny blue drum. “I asked the teacher, Mr. Galperin, if I could play it, and he said ‘Yes’,” Schwartz recalled. “So, I started playing it and realized that this is what I wanted to do. For my birthday, I got a tiny little Wal-Mart drum set. I was banging on that thing at all hours.”

By the time Schwartz was in first or second grade, Boris Galperin, the music teacher, recommended that he audition for Jazz House Kids. “I wasn’t incredibly proficient on the instrument,” Schwartz said, “but I decided to go to the program. I was incredibly scared. Ted Chubb, who was the Director of Jazz House Kids at the time, allowed me to join one of the lower bands just a few days after my audition. I would say Jazz House Kids has been the catalyst for the majority of my growth.”

That growth has been impressive. This summer Schwartz has been invited into Carnegie Hall’s National Youth Orchestra Jazz program, which accepts 22 student musicians from across the country. He has also been accepted into the Vail Jazz Workshop, a program in Vail, CO, that accepts 12 high school-age jazz musicians for a 10-day session. Schwartz will be entering his junior year this fall at Newark Academy, a private day school in Livingston, NJ, whose jazz ensemble, directed by Julius Tolentino, is a perennial finalist at Jazz at Lincoln Center’s Essentially Ellington competition.

Schwartz submitted his application for Carnegie Hall’s NYO program in January and found out in March that he’d been accepted. “Usually, there’s an international tour, but this year, because of Covid, we’re staying in America. A lot of the music we’ll be playing is based off of America. There’s a song called ‘Track 360’ by Duke Ellington, based on a train that’s moving through America. Also, a tune called ‘The American Express’. A really big one is ‘Fables of Faubus’ by Charles Mingus, about the civil rights movement and stuff. Really cool. This year the drum instructor is Allison Miller. She’s incredible.” At Vail, he’ll be studying under Lewis Nash, “one of my heroes.

“The first drummer I was aware of,” he said, “was Buddy Rich. The reason I got into him so much early on was because – when you’re little, you tend to look at people who play really fast, crazy chops and playing all over the drum set. He was just so electrifying to watch. After my early years, I started listening to drummers that people at Jazz House would recommend. The Big Four for me were Art Blakey, Philly Joe Jones, Tony Williams, and Art Taylor.”

His current teacher is drummer/composer/educator Matt Slocum, who Schwartz said, “focuses so much on getting everything to the highest level possible. One of his other talents besides drumming is composing. He just released an album with all his original compositions with (bassist) Larry Grenadier, (pianist) Taylor Eigsti, and (saxophonist) Walter Smith III. He stresses to me the importance of learning the piano and learning to write. When you learn that, the drum set opens up.” The album, released in December 2021 on the Sunnyside label, is With Love and Sadness.

Slocum said Schwartz, “has a beautiful blend of tradition and innovation in his playing. He brings an open and humble spirit to any ensemble, as he continues to develop his own creative voice and serve the music. Ben’s depth of musical language and feeling are already on a professional level. And, like all masters of this art form, Ben is a great listener.”

Jazz House Kids’ Ted Chubb recalled that when he met Schwartz as a seven-year-old, “I knew he was a special student. Ben’s early musical exuberance and talent for the drums has transformed into a keenly disciplined and serious-minded young artist with all of the gifts to be on the forefront of the future of this music. Ben possesses a rare combination of an astounding high command of the bebop language, technical virtuosity, poise in performance, humility, humor, and, most importantly, a deep sense of swing and groove.”

Schwartz is the drummer in the Baker Street Trio, a local group with fellow Maplewood resident Ben Collins-Siegel on piano, and Ryoma Takenaga on bass. Takenaga, who lives in New Providence, was in last year’s NYO Jazz orchestra. “The first time we really played as a trio was in the fall of 2020,” Schwartz said. “We just started playing on Baker Street (in Maplewood) every week.” Last October, the trio performed at the New Jersey Jazz Society’s Virtual Social and opened at Maplewood’s The Woodlands for guitarists Bernie Williams and Gil Parris. Seeing the former New York Yankee on guitar was “nuts” for Schwartz. “My dad and I are big Yankee fans,” he said. “I’m a three-sport athlete. I play basketball, baseball, and I run cross country. So, I’ve been struggling with the music vs. sports thing. It was cool to see someone doing both. We really love playing around the community,” he continued. “Especially during Covid, it seemed to uplift people around us.”

Newark Academy’s Tolentino, he said, “has by far been one of the most important people in my life. I don’t think I’d be the musician I am today without Mr. Tolentino. There are not a lot of schools that have the type of program that Newark Academy does. Every single aspect of it is at a high level. The program meets four times a week and after school. We’re always with each other. It’s not just jazz. It’s a group of friends. Mr. Tolentino creates a community, not just a bunch of musicians.”

As a fifth grader at Lawrence Intermediate School in Lawrenceville, NJ, Laura Simone-Martin was planning to play the cello. But her mother, Dr. Trineice Robinson-Martin, who teaches Vocal Jazz at Princeton University, showed her a video of bassist Esperanza Spalding performing at the White House. “I saw her in her Afro, playing and singing. I just saw myself and thought that I could be like her.”

After that, Simone-Martin’s mother signed her up for private lessons with Art Stefano, a teacher at Music & Arts, a Lawrence Township music store. “We started focusing on orchestra,” she recalled, “and I didn’t get into jazz until the summer between eighth and ninth grade when I went to the Litchfield Jazz Camp for the first time.” At the Connecticut camp, she met and learned from such instructors as pianist Avery Sharpe, baritone saxophonist Claire Daly, and the camp’s Director, tenor saxophonist/flutist Don Braden.

During her freshman year at Lawrenceville High School, Simone-Martin became a member of the New Jersey Youth Symphony Jazz Orchestra, where she studied under the Director Julius Tolentino and pianist Shamie Royston. She said Royston “was a huge influence in my life. She really inspired me as a Black woman who played piano and was a bandleader and composer. I also met her younger sister (alto saxophonist) Tia Fuller. They’re both like my aunties.” Simone-Martin also played with the Lawrenceville High School Orchestra, Wind Ensemble, and Jazz Band. In 2020, she was named to the National Association for Music Education All-National Honor Jazz Ensemble, and she currently performs with the Jazz at Lincoln Center Youth Orchestra, directed by trumpeter Tatum Greenblatt.

This summer, Simone-Martin is one of two New Jersey students accepted into the Carnegie Hall NYO Jazz orchestra. While at NJYSJO, she met drummer Ben Schwartz, the other NYO student musician from New Jersey. She also met bassist Ryoma Takenaga and drummer Koleby Royston, Shamie Royston’s son, both of whom were in the 2021 Carnegie Hall NYO program (Jersey Jazz, May 2021).  It’s connections like this that make Simone-Martin realize “how small the jazz world actually is.”

Last summer, she attended the Vail Jazz Workshop (which Schwartz is attending this summer), and “three other students there are also a part of NYO Jazz this year.” Last fall, she performed at the Monterey Jazz Festival, part of the 2021 Next Generation Women in Jazz Combo, a very selective sextet featuring one student on each instrument. “It’s amazing,” she said. “A lot of the people that I met at Monterey are also going to be a part of NYO this year.” Applying for the Monterey Festival, she said, was a daunting experience. “I was a bit nervous and having a lot of self-doubt. My teacher, Matthew Parrish (who also teaches at Princeton), pushed me to audition and said, ‘even if you don’t make it, it’s a great opportunity to practice, which is something you’ll have to do for college.’ The experience was really eye-opening. I saw a lot of the elite players.”

In the fall of 2021, Simone-Martin created the Queen Amina program for the Lawrenceville Intermediate School. It’s named after the African warrior queen and designed to educate fourth through sixth grade female instrumentalists. “I teach them about women composers and women instrumentalists, and the history of the music. Also, I’ve invited guest speakers such as Tia Fuller and (bassist) Katie Thiroux. This past year I had 28 girls. Next year, I want to expand and include middle schoolers because some of the sixth graders moving on to a new school have expressed their dismay at not having Queen Amina.”

In her sophomore year, Simone-Martin created her high school’s first Black Student Union. “I am also Vice President of Students for Social Activism,” she said. “We do a lot of fundraisers and hold discussions. One of our fund drives was a cold weather coat drive for Martin Luther King Day, and we got about 400 coats and 339 hats. We also hosted a Zoom community discussion where we read Martin Luther King’s speech and invited councilmen, school administrators, and teachers. And the Mayor came.”

As she enters her senior year of high school, Simone-Martin is, of course, thinking about college. Among possibilities: Michigan State, Johns Hopkins’ Peabody Institute, The Juilliard School, Manhattan School of Music, Berklee College of Music, and Spelman College. And, although Esperanza Spalding sparked her initial interest in jazz bass, her list of bassist heroes has expanded considerably. It includes: Paul Chambers, Ray Brown, Ron Carter, Christian McBride, Israel Crosby, and John Clayton. “Studying under John Clayton at the Vail Jazz Workshop,” she said, “was life changing. He’s one of the nicest and most supportive teachers I ever had.” –SANFORD JOSEPHSON