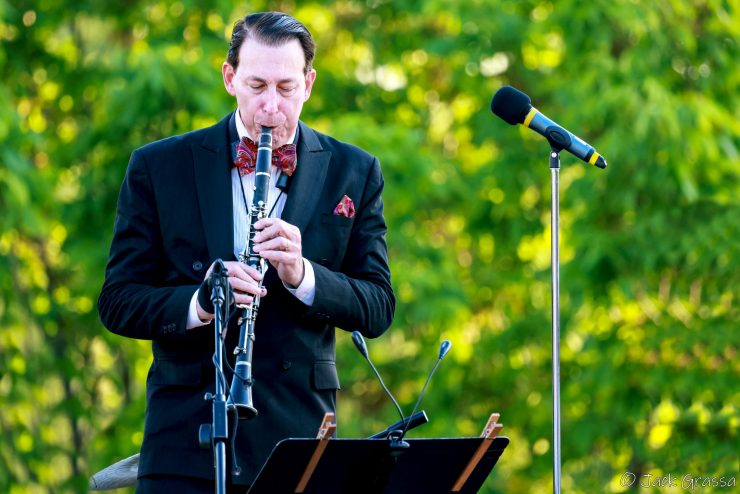 **Complimentary July/August Jersey Jazz Content** This is one of two articles from the July/August 2022 issue of Jersey Jazz Magazine being made available to everyone. For complete access to all articles in our award-winning Jersey Jazz magazine, please join the New Jersey Jazz Society by clicking HERE.

“I have a new album coming out with Dick Hyman,” Dan Levinson said. “We recorded it 30 years ago.”

The first concert that clarinetist/tenor saxophonist Levinson (pictured above) played with legendary pianist Dick Hyman was in July 1992 at a 92nd Street Y tribute to 1920s clarinetist Frank Teschemacher, who died very young. “I was still rough around the edges,” said Levinson, “but Dick thought I would be a good fit.” Levinson played clarinet, and the other musicians in the band were: Peter Ecklund on cornet, Ken Peplowski on tenor saxophone, Dan Barrett on trombone, Marty Grosz on banjo, Bob Haggart on bass, and Arnie Kinsella on drums. Trumpeters Richard Sudhalter and Jon-Erik Kellso also made guest appearances.

That performance was never recorded – until now. The album, One Step to Chicago The Legend of Frank Teschemacher and the Austin High Gang, was released by Rivermont Records in May. (See Joe Lang’s review on page 36 of the July/August issue of Jersey Jazz). “It’s a tribute to the early Chicago jazz pioneers,” Levinson said. In addition to Teschemacher, they include guitarist Eddie Condon, cornetist Jimmy McPartland, tenor saxophonist Bud Freeman, and pianist Joe Sullivan.

Levinson will be bringing his Mid-Summer Night’s Jazz Party to the Morris Museum’s Jazz on the Back Deck series on Thursday, July 21. That band will feature Danny Tobias on trumpet, Jim Fryer on trombone, Conal Fowkes on piano, Rob Adkins on bass, Kevin Dorn on drums, and Molly Ryan (Levinson’s wife) on vocals. “Some time before the concert, I’ll start thinking about what we’re going to play,” he said. “Other than having some great musicians and putting together some great tunes, there’s no real theme to it.” He will also be appearing with the James Langton All-Star Big Band to open the Morristown Jazz & Blues Festival on September 17.

The One Step to Chicago recording actually includes two bands. “While Hyman’s band played note-for-note transcriptions of the Teschemacher recordings,” Levinson explained, “there was another band, Kenny Davern’s band.” Clarinetist Davern’s band, Levinson said, “played in the spirit of the great Chicago jazz musicians. Kellso was on trumpet and Barrett on trombone, Howard Alden on guitar, Hyman on piano, Milt Hinton on bass, and Tony DeNicola on drums. When we recorded it, Hyman’s band recorded first, then Kenny Davern’s band; and in the middle we did a jam session with both bands on ‘Farewell Blues’.” “Farewell Blues”, written by Paul Mares, Leon Roppolo and Elmer Schoebel in 1922, was initially released by the New Orleans Rhythm Kings under the name, the Friars Society Orchestra. It was played by several jazz bands in the ‘20s.

According to Levinson, the legendary producer George Avakian was at the 1992 92nd Street concert and wanted to record it, but that never happened. “When I went to visit George a few months before he died in 2017,” Levinson said, “I asked if there was any hope for the Chicago jazz album,” and he said, ‘I don’t think I have the masters anymore.’ George’s son was in the room, and he texted me that night and said, ‘Get the album out; Dad doesn’t need the money. I’ll sign any paperwork you need me to sign.’ In July of 2020, Dick Hyman called me and said, ‘I’m listening to the session tapes we did for the Teschemacher album, and they really sound great. It’s such a shame they never got issued.’

Levinson then contacted Bryan Wright, a pianist and musicologist who founded Rivermont Records in 2003. “He was exuberant and on board,” Levinson said. All the photos and paperwork from the session, though, were in the New York Public Library, which was closed because of the pandemic and didn’t reopen until the spring of 2021. “When I did go there,” Levinson said, “it was like I found the Holy Grail. Memories came flooding back to me. All those guys are on it. They sound great. I wrote the liner notes. Hank O’Neal (music producer/photographer) wrote a foreword; (drummer/educator) Hal Smith wrote a little essay on Chicago jazz drumming style; Marty Grosz wrote some notes about the people he knew who had been part of that scene; and Dick Hyman wrote a paragraph. Bryan Wright spared no expense. It’s a book with a CD rather than a CD with a booklet.”

When Levinson started playing clarinet, he had two contemporary heroes: Davern and Ken Peplowski. “I had talked to Kenny Davern about taking lessons, and he said, ‘I wouldn’t know what to teach you.’ But I learned so much from listening to his records.

“I did study with Peplowski,” he continued. “In 1985, he was just a sideman doing local gigs around town. I heard something really spectacular in him that I didn’t hear in anybody else. I studied with him for three years, first on clarinet and then on saxophone. In 2016, he gave a master class at my wife Molly’s New York Hot Jazz Camp. As I listened to him, I realized everything he said was exactly in line with my own philosophy. He planted those ideas in my head from the very beginning. For example, how loud you play is not as important as what you play. He also said Benny Goodman didn’t often solo on ballads. He would play the melody and pass the solos off to the other guys. And then, he’d play the melody again at the end. When I play a pretty tune, like ‘Memories of You’, I just want to play the melody and let the other guys do the improv stuff.

“Peplowski and Davern and Dick Hyman were the biggest influences on me along with Rosy McHargue,” Levinson said. “Rosy was a saxophonist and clarinetist, and most of his life he played C melody saxophone. He was born in 1902, and I met him in 1984. He was the one who inspired me from the very beginning. He taught me who to listen to, what to listen to. He lived in Santa Monica, California, and when I would go back to LA to visit my family, I would spend time with Rosy. He learned to play from listening to the first jazz records in 1917 by the Original Dixieland Jazz Band. He knew and recorded with Frank Trumbauer, Bix Beiderbecke. He knew Red Nichols, Miff Mole, and Benny Goodman. He continued playing until 1999, right up until the end. In 1984, I didn’t play an instrument yet. I was just interested in the music. So, he played an important part in helping me choose an instrument and become part of the band.”

The night before I interviewed Levinson, he performed with the James Langton band at The Cutting Room in New York, playing tunes from an album the band made in 2016 called The Unheard Artie Shaw (Hep Records). “When we did the album,” Levinson recalled, “we were looking for somebody to do the Billie Holiday vocals. James said, ‘Do you have any way to get in touch with Madeleine Peyroux?” I said, ‘I’ve known her since she was 16 years old.’ (Around 1990, Levinson spent a year as a street musician in Paris. Madeleine Peyroux was a female singer in the band). She’s on the album, but she was under contract to another label, and, at the time, we couldn’t put her name on it.” But she did sing at The Cutting Room performance. “She sang four tunes. Three of them were on the album. The fourth was with (trombonist) Art Baron. They did ‘All of Me’.”

Levinson believes traditional jazz is alive and well, spurred by a revolution of sorts that took place about 16 years ago. “Sometime around 2006,” he said, “there was this whole wave of new musicians coming along interested in playing traditional jazz. It became a huge trend. There’s a jam session still going on every Tuesday night at Mona’s (in the East Village). I befriended a lot of the musicians and put them in my bands. Many of them were still learning the music, but I enjoyed their enthusiasm. Just as Dan Barrett shared music with me, I shared it forward by sharing music that I loved with the new torchbearers of traditional jazz, as I called them.” –SANFORD JOSEPHSON

The Dan Levinson Mid-Summer Night’s Jazz Party concert begins at 8 p.m. For ticket information, log onto morrismuseum.org/events or call (973) 971-3706. The New Jersey Jazz Society is a media sponsor of the Jazz on the Back Deck series.