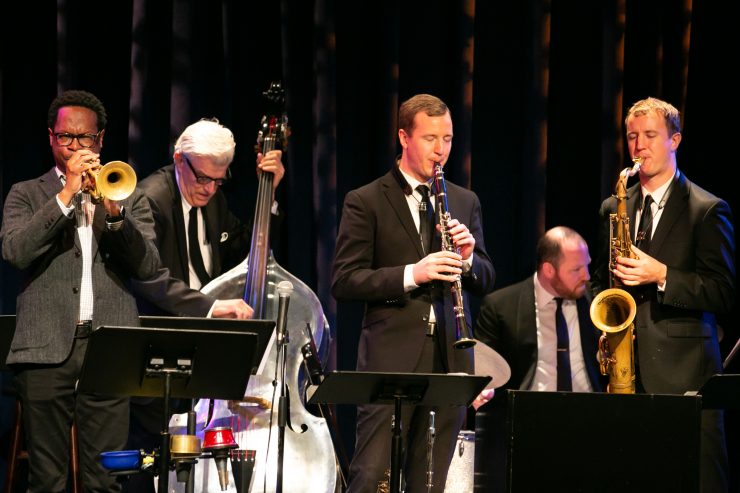 For several years, Peter and Will Anderson have been presenting highly entertaining concerts featuring the music of the composers of the Great American Songbook. Their most recent effort, at Symphony Space on August 13, was dedicated to the compositions of Henry Mancini whose output was primarily related to his work as one of the premier composers of scores for films.

The Mancini program was played by a sextet. Pictured, from left are: Brandon Lee on trumpet, Vince Giordano on bass, Will Anderson on alto sax, Alex Raderman on drums, and Peter Anderson on tenor sax, soprano sax and clarinet, flute and clarinet. They were joined by Dalton Ridenhour on piano. Will Anderson served as host, providing informative commentary, while Peter Anderson wrote the consistently engaging charts.

The television detective show Peter Gunn was one of the undertakings that brought Mancini’s name to wide public consciousness. The Andersons chose to play the lovely “Dreamsville,” written for the show as well as the “Theme from Peter Gunn,” which became a huge hit.

Probably the most widely recorded Mancini composition is the Academy Award winning “Moon River” from Breakfast at Tiffany’s. Here it was beautifully visited by Peter Anderson on soprano sax with solo support from Ridenhour. Another hugely successful creation of Mancini’s is the “Theme from The Pink Panther,” brought to sparkling life by the full group.

Ridenhour was given a solo spotlight and selected a medley of “Breakfast at Tiffany’s” and “Love Theme from Romeo and Juliet,” composed by Nino Rota but arranged for the film by Mancini. He beautifully blended these pieces. The concert closed with another of Mancini’s Academy Award winning tunes, “Days of Wine and Roses.”

Peter Anderson’s arrangements gave the sextet the sound of a larger ensemble. He allowed ample solo space for all the players. The front line of the Andersons and Brandon Lee delivered tight ensemble playing and each displayed strong solo chops. The rhythm section was as supportive as any group could desire.

Will Anderson’s commentary was well researched and full of the typically wry humor that has been a hallmark of these composer concerts. To supplement the oral content, Anderson compiled a complementary slide presentation.

The entire package proved to be thoroughly entertaining from start to finish. The Andersons are very much in the mainstream of jazz, accessible, swinging and imbued with stellar musicianship. They did full justice to the Mancini catalog. –JOE LANG