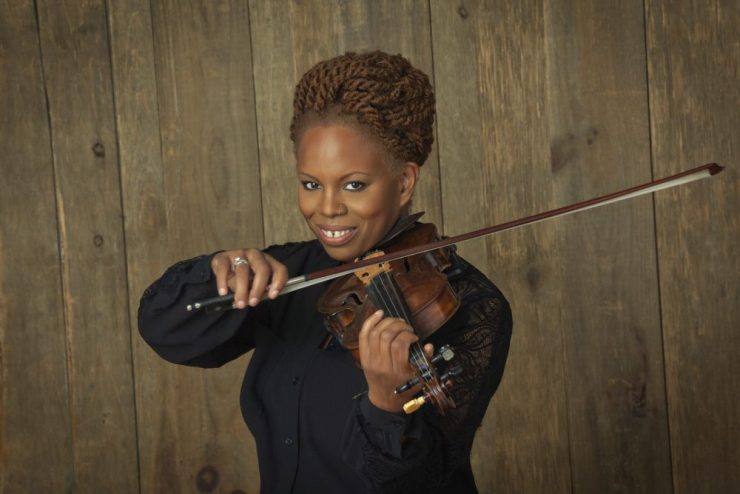 There is definitely a New Jersey flavor to the 2023 National Endowment for the Arts Jazz Masters honoree list. Two of the three NEA Jazz Masters Fellowship recipients are from the Garden State – violinist Regina Carter, who lives in Maywood and saxophonist Kenny Garrett, who resides in Glen Ridge. The third NEA Jazz Master is drummer Louis Hayes, and the A.B. Spellman NEA Jazz Masters Fellowship for Jazz Advocacy will be awarded to Sue Mingus, who has supported and promoted the memory of her late husband, bassist Charles Mingus.

Carter (photo above) appeared on the cover of the January 2021 Jersey Jazz Magazine in connection with her tribute to Ella Fitzgerald as part of the New Jersey Performing Arts Center’s “Free Virtual Programming Celebrates Jazz Greats” series held during the pandemic. In 2017, to celebrate Fitzgerald’s 100th birthday, Carter released an album on the Okeh Records label called Ella Accentuates the Positive. In her Jersey Jazz interview, Carter recalled being educated by saxophonist Big Nick Nicholas about the importance of knowing the lyrics of the music she played. “He explained the importance of knowing the words and understanding the meaning of any song before playing it,” she said, “paying respect to the composer to properly interpret the tune.”

In November, Carter will play in the Carolyn Dorfman Dance Company’s performance, “Jazz Legends and the Power of NOW!” during NJPAC’s TD James Moody Jazz Festival. It will feature choreography set to the jazz recordings of trumpeter/vocalist Louis Prima.

Garrett, who began his career with the Duke Ellington and Mel Lewis orchestras, played with Miles Davis, Freddie Hubbard, Woody Shaw, and Art Blakey’s Jazz Messengers before launching a solo career. AllAboutJazz’s Ian Patterson, reviewing Garrett’s 2021 Mack Avenue album, Sounds from the Ancestors, wrote that he, “turns to the past for inspiration. From the Motown and gospel music he was weaned on as a youth growing up in Detroit, to the hard bop of Blakey and post-bop of John Coltrane, Garrett wears his influences proudly on his sleeve.”

Like Garrett, Hayes grew up in Detroit, influenced early on by such legends as multi-reedist Yusef Lateef and guitarist Kenny Burrell. At the age of 18, he was the drummer in the Horace Silver Quintet, moving on to play with such other jazz giants as Cannonball Adderley, Oscar Peterson, and McCoy Tyner. Hayes’ latest album as a leader was the 2021 Savant Records release, Crisis. In his JazzTimes review, Philip Booth pointed out that the title tune is “the name of a sprightly, color-shifting piece reminiscent of a time and place essential to his blossoming as a creative artist: the late ‘50s in New York when Hayes and the tune’s composer, Freddie Hubbard, lived in the same Brooklyn building.” Throughout the album, Booth continued, “Hayes handily creates a foundation of effortlessly grooving, deeply rooted swing . . .”

In awarding the A.B. Spellman Fellowship to Sue Mingus, the NEA pointed out that she “has been a fierce proponent for the legacy of her late husband, Charles Mingus, one of the legends of jazz . . . In addition to being an archivist and publisher of the bassist and composer’s life and music, she has also directed several bands dedicated to performing and recording Mingus’ music.”

The April 2022 issue of Jersey Jazz celebrated Charles Mingus’ centennial birthday with a feature article, “Charles Mingus at 100: Remembering a Genius”. And the News section of njjs.org featured “Mingus Musings” throughout the month of April.

The award recipients will be honored at a public concert in Washington, DC, on Saturday, April 1, 2023, in collaboration with the John F. Kennedy Center for the Performing Arts. –SANFORD JOSEPHSON