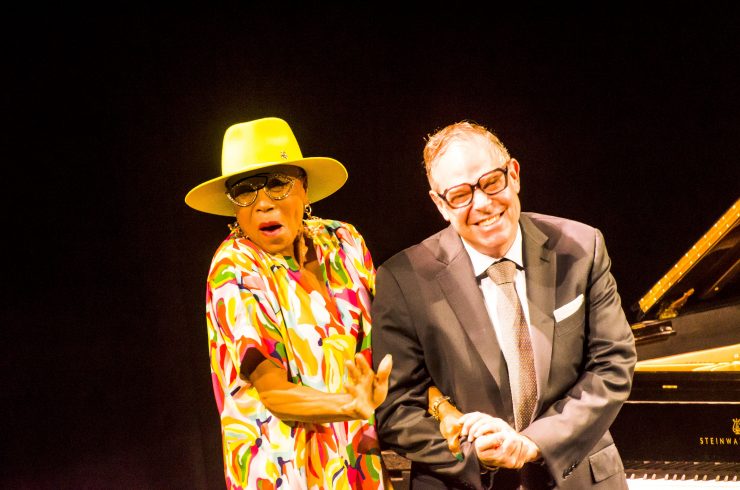 The first concert was by pianist Helen Sung. Although classically trained until she was in college, Sung found her true satisfaction in playing jazz, which she does with the deep devotion often found among converts. She has a true feel for it and the classical training to expand her interpretations of it. Her considerable abilities as a performer are equally matched by her abilities as a composer

Sung noted that after the CD was released, she learned that “Mary’s Waltz,” a work she assumed was penned by Mary Lou Williams, was, in fact, written by a man who dedicated it to Williams. She noted, with satisfaction, that this was a rare instance where such a misattribution went in the woman’s favor. The next day I learned that Sung recently won the BMI Foundation’s 23rd Annual Charlie Parker Jazz Composition Prize for one of her original compositions.

The next evening’s concert was performed by Jazzmeia Horn, a vocalist blessed with an exceptionally beautiful voice and an impressive range. She was ably backed by Keith Brown (piano), Jason Carter (bass), and Russell Carter (drums). Her set was a mix of her own works, such as “Strive”, and great standards, among them Rodgers & Hammerstein’s “My Favorite Things” and “You’re Getting to be a Habit With Me” (Harry Warren/Al Dubin).

Her final selection, Jimmy Rowles’ “The Peacocks”, was beautifully done with soul stirring emotion. It showed why reviewers frequently compare her favorably to past greats such as Betty Carter and Sarah Vaughan.

The third event attended by this writer was the duo of Dee Dee Bridgewater and Bill Charlap (photo above). To call it a duet is grossly inadequate. It was a masterclass by two eminent artists who just walked onto the stage, established their ownership of the moment, and demonstrated exactly how it should be done. They gave us a feast of great standards, usually without comments.

Charlap told me they perform with no more than setlists, and often stray from that. “We really approach everything completely extemporaneously every night. Even with whatever repertoire we choose, it really could go in any direction: different tempos, different conceptions. Especially with the piano and the voice alone, we are both free to orchestrate and conceive the things as we want to on the spur of the moment. It’s wonderful exploration.”

For example, when Charlap challenged Bridgewater with the lyric-less “Rockin’ In Rhythm,” (written by Duke Ellington, Harry Carney, and Irving Mills), she rendered a joyous scat performance that concluded the set on yet one more unbelievably high note. The packed house erupted in long, loud applause and cheers. Some of the remarks I heard were, “This is fabulous,” “…really extraordinary…” and “Fantastic.” The master pianist evaluation was that when they do this, “We’re really having a very, very good time.” As did we all. –SCHAEN FOX