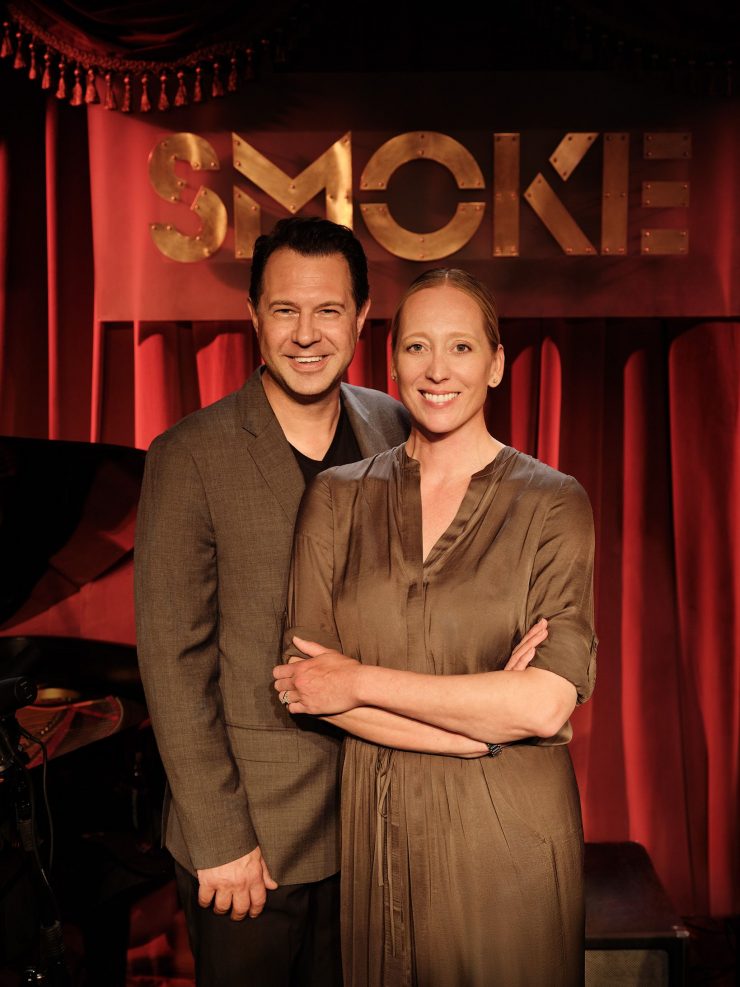 For more than 50 years, live jazz could be heard at 2751 Broadway in New York, first as Augie’s Jazz Bar then as Smoke. Then came the pandemic and, while many clubs succumbed, husband and wife co-owners, Paul Stache and Molly Sparrow Johnson (photo above), not only endured, they adapted, improvised and improved. Now, like the legendary Phoenix, it is about to reappear better than it was before; and Stache and Johnson were happy to talk about it.

“It’s been a tricky two plus years navigating through this pandemic,” Stache said. “We’ve attempted to keep the music going from sidewalk concerts, to livestreams, to records. It’s been a process that took longer than we initially thought it would take. And we cannot wait to get the doors open, get the music playing and welcome people in person.”

An added factor in the process is that Smoke is in an historic district and the Landmark Commission must approve of changes. And changes abound. Smoke has expanded by absorbing the two adjacent, long vacant storefronts.

“In early 2020, Molly and I were looking at indoor dining and social distancing regulations with a good friend [who is] an architect,” Stache explained. “He figured out what the room could look like in order for us to be able to let people in and still comply with the safety regulations. The occupancy would be 12 to 14 people, that’s not a business proposition, it was the worst of all worlds: an incredible risk, and it would not create any revenue.

“Then we started a livestream series, which was well received, and something we always wanted to do. It was really the only thing we could do safely, and our number one priority was keeping the performers, the staff, and the audiences safe through this.

“We were lucky to be in a situation where we had a landlord who was working with us and wanted to make sure that we survived this pandemic. That allowed us to make decisions based on what is the safest for our community without having the pressure of eviction.

“The windows at Smoke actually open all the way accordion style. After we did the live- streaming series, Molly and I built little greenhouses on the sidewalk where people could dine in parties of two, or four, and the band would play in the window. They were essentially sidewalk concerts that were very well received. When all the tables were full, people gathered on the sidewalk. and when the sidewalk was full then the first lane on Broadway would fill with people. At some point, we had one working lane of traffic on Broadway, because so many people had gathered just to watch the performance.

“It was a very emotional moment, because people were standing there with tears rolling down their cheeks. It was clear that people really needed live music. And we realized that we’ve got to figure out a way to make this work. There were multiple areas where the club had to be modified for the customer experience, for the musician’s experience, and for the safety of the staff. That’s why this renovation probably took longer than otherwise would have.”

The kitchen was another critical problem. “I was in the kitchen, overseeing two other cooks, and it was scary,” Johnson said. “We were all gloved, and double masked with face shields. The kitchen was such a tiny space. Now the kitchen is doubled in size. It just makes it much easier for people to distance and we’ve installed a big air unit in the kitchen that brings fresh air into the kitchen and into the club. Which also makes the situation much safer for everyone.”

Smoke will reopen on Thursday, July 21 with the George Coleman Quartet and special guest Peter Bernstein on guitar. Coleman and Bernstein will be joined by Davis Whitfield on piano, Peter Washington on bass, and Joe Farnsworth on drums. This will be a four-night appearance, running through Sunday, July 24. Other groups appearing in July and August include the Bobby Watson Quartet, Louis Hayes & The Cannonball Legacy Band, and the Heavy Hitters with Jeremy Pelt on trumpet, Eric Alexander on tenor saxophone, Mike LeDonne on piano, Peter Washington on bass, and Kenny Washington on drums.

“We’re really excited to have George Coleman back to officially reopen the renovated Smoke,” Johnson said. “He opened the club in ‘99 and he was also the first back after 9/11 when we closed for a couple of days. Now he’s back after two and a half years, and we’re really happy about that.”

Smoke will continue to offer live streaming in addition to live performances. For more information, log onto SMOKEjazz.com – SCHAEN FOX