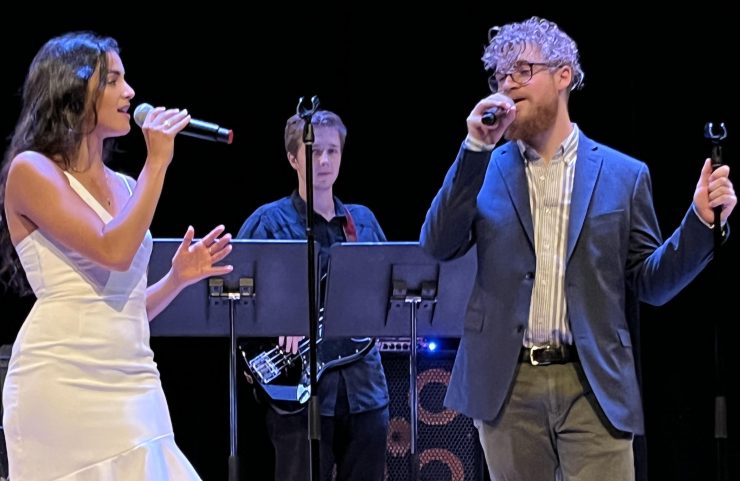 **Complimentary June Jersey Jazz Content** This is one of two articles from the June 2022 issue of Jersey Jazz Magazine being made available to everyone. For complete access to all articles in our award-winning Jersey Jazz magazine, please join the New Jersey Jazz Society by clicking HERE.

The winners of the New Jersey Jazz Society’s new Juried Scholarship Competition are:

The competition was open to all college students currently enrolled in a New Jersey college undergraduate music program. Along with the cash awards, the winning students will also receive guidance, mentorship, and the opportunity to perform with an industry professional.

This inaugural competition was generously sponsored by Nan Hughes Poole, and an additional anonymous donation.  NJJS would like to thank both donors for their patronage and stewardship.

The Board of Directors would also like to thank the esteemed panel of judges, comprised of professional musicians, educators and industry leaders — Don Braden, Ted Chubb, Mariel Bildsten, and Jason Olaine — for their participation and expertise in crafting and shepherding this competition.

Here are the winners:

When Liam Sutcliffe was 10 years old, he saw a video of Dizzy Gillespie. From that point forward, he knew he wanted to play the trumpet. Growing up in Moorestown, NJ, Sutcliffe began studying with Bob Pollitt, a saxophonist who performed with such legends as John Coltrane, Sonny Stitt, and James Moody, among many others. “After quickly improving on the trumpet and learning jazz,” he said, “I started sitting in on his gigs at places like The Pub in Pennsauken and the Firehouse Café in Mount Holly.”

While attending Princeton High School, Sutcliffe made the All-State Band every year and was a winner in the jazz category of YoungArts, a Miami, FL-based organization that identifies the most accomplished young artists in the visual, literary and performing arts and provides them with creative and professional development opportunities throughout their careers. In his senior year in high school, Sutcliffe won the New Jersey Association for Jazz Education Rick Kerber Scholarship, presented to one soloist every year at the NJAJE high school jazz band state finals.

After spending a year at the Manhattan School of Music, Sutcliffe transferred to Rutgers where he studied trumpet under Tatum Greenblatt and also learned from veteran faculty members such as saxophonist Ralph Bowen, drummer Victor Lewis, and trombonist Conrad Herwig, who is Head of Jazz Studies.

Greenblatt, featured as one of the four trumpet “Young Lions” at Jazz at Lincoln Center’s “Wynton at 60” concert last fall, wrote a letter recommending Sutcliffe for the NJJS Scholarship. He recalled encountering the young trumpeter “during his senior year of high school. He was a member of the Jazz at Lincoln Center Youth Orchestra, the top ensemble in the High School Jazz Academy, which I co-led at the time with Ted Nash. The trumpet section that year was a veritable ‘Murderer’s Row’ – one of the best I’ve ever seen at the high school level. Liam was our secret weapon of sorts, quiet and unassuming, but he would unleash a torrent of lyrical bebop over any set of changes.

“Much to my delight, Liam transferred to my studio at Rutgers Mason Gross School of the Arts from Manhattan School of Music for his sophomore year. His dedication and drive were immediately clear, as was his desire to focus on the minutiae of the instrument.”

“Some of my biggest influences on the trumpet,” said Sutcliffe, “are Roy Hargrove, Tom Harrell, Kenny Dorham, and Joe Magnarelli. I would love to have a career playing jazz music. However, I also enjoy playing other genres of music in different musical settings. Being a well-rounded trumpet player and musician has also made me a better jazz player.”

While attending Hopewell Valley Central High School in Pennington, NJ, Jimmy Waltman (pictured above with vocalist Sara Miller and bassist Aaron Skepasts), was encouraged by Choir Director Randy White to audition for the jazz choir. “The group was very important to me as my first introduction to jazz,” he said. “I also studied privately in high school with Dr. Tim Brent, who was an amazing teacher of jazz theory and improvisation, as well as vocal interpretation.”

Waltman thought about attending a conservatory for college, but, “I ultimately chose to come to Princeton because of the freedom I would have to explore many styles of music and to study subjects outside of music. Composition, performance, and musicology are all important to me, and I love studying pop, R&B, and hip hop, in addition to jazz. I’ve also found that the classes I take outside of the music department, like astrophysics or Buddhist philosophy, often inspire me as a composer and songwriter.”

His vocal heroes are Betty Carter, Chet Baker, and Johnny Hartman, but, “I’m also inspired by singular jazz composers like Mary Lou Williams, Antonio Carlos Jobim, and Cecil Taylor. And, some of my contemporary heroes are (saxophonist) Kamasi Washington, (guitarist) Thundercat, and (pianist) Robert Glasper, who are incorporating jazz into hip hop, R&B, and pop in a way I find really exciting.”

At Princeton, Waltman studied under composer/bandleader Darcy James Argue, best known as the leader of his 18-piece ensemble, Secret Society. “In my sophomore year,” he said, “I took two composition classes with Professor Argue that were incredibly formative, one for small ensembles and one for large. The knowledge of jazz harmony and horn writing techniques I gained has not only helped me as a jazz composer, but also as an improviser and songwriter.”

In his recommendation of Waltman for the NJJS Scholarship, Argue said, “He impressed me immediately with his passion for jazz songcraft, informed by his own experience as a singer. He dove into the course materials with gusto, and it was a pleasure to see him develop his understanding of harmony and orchestration.” In his scholarship application, Waltman submitted “Ballad of an Early Summer Night”, an original composition for big band. “This chart,” Argue said, “impressed me with the maturity of the melody and harmonic progression and its well-formed architecture. It features soaring melodic writing for the solo trombone, a richly harmonized sax soli, and a buoyant double-time shout chorus. It is brimming with energy and ideas.”

Added Waltman: “As I finish my junior year and think about my goals as a musician after I graduate, I would love the chance to connect with professional musicians as I enter the professional music world as a jazz composer and songwriter.”

Sam AuBuchon grew up in St. Louis but traveled to New Jersey to study at William Paterson because he felt “it would give me the tools I need to excel, learn and grow as a musician.” At William Paterson, he studies jazz bass performance under Steve LaSpina, and, outside of school, he has studied with Ron Carter and David Wong.

“I knew that being close to New York,” he said, “would help me immensely grow as a musician. Nearly all of my free time is spent practicing, listening, and studying as much as I can. I am going into New York to play at sessions at Smalls or going to the Blue Note so I can be involved with all the music that is currently happening.”

AuBuchon’s bass playing, said Dr. David Demsey, Coordinator of Jazz Studies at William Paterson, “is deeply rooted in the jazz tradition, and he has benefited a great deal from studying with our bass faculty and with Bill Charlap (Director of Jazz Studies). In all of his classes, he is becoming one of our leaders in the program.”

As he finishes his sophomore year, AuBuchon wants to “continue to grow and keep moving forward. I want to be able to use my playing and my music to push forward and find new ideas, new sounds, and concepts. I would like to be a leader of this music and help spread it. My current jazz education teaches and shows me the history of the music, from where it began to where it is currently. With that knowledge, I believe it can help me to find new sounds and help bring my own original and personal sound to the music.”

During his junior year at Fort Lee High School, Derick Campos joined Jazz House Kids. “As a songwriter,” he said, “I wanted to get closer to understanding jazz harmony, which is what led me to the program. My first combo teacher was (alto saxophonist) Bruce Williams, and he helped me understand the art of improvisation.

Campos selected Montclair State because he wanted to study with guitarist Dave Stryker, who is on the faculty. “I first met him at a Jazz House Summer Workshop,” Campos said, “and I was inspired by his beautiful tone.” Stryker was also inspired by Campos, describing him, in a recommendation letter, as “one of the best students I’ve worked with. He takes all the things he has learned in our lessons and is able to organically add them into his playing. He is always working on new songs and ideas.”

Campos began playing guitar at age 13. His family is from Brazil, and Stryker pointed out that “he has an affinity for Portuguese as well as jazz composition.” Added Campos: “Writing music is the closest thing I have as a connection to my roots and inner self. In my submission, the song I wrote, ‘Caminhando con Ton’, was dedicated to (Brazilian guitarist) Toninho Horta, who is one of my biggest influences.”

Other early influences were Joao Gilberto and Antonio Carlos Jobim. “As I furthered into the jazz idiom ,” Campos said, “Wes Montgomery, George Benson, and Kenny Burrell were some of my main inspirations.” –SANFORD JOSEPHSON