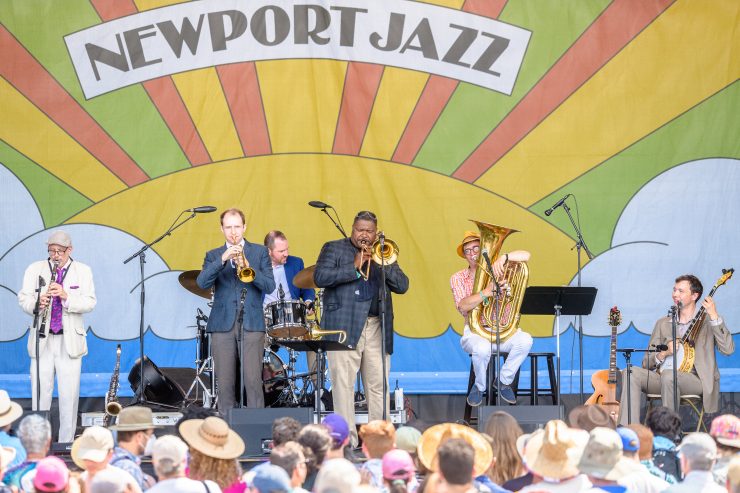 David Ostwald’s Louis Armstrong Eternity Band (pictured here at last year’s Newport Jazz Festival) finally returns to the Jay and Linda Grunin Center for the Arts’ Jazz on a Sunday Afternoon series on June 12, a concert originally scheduled for 2020 and 2021 but delayed both times because of Covid-19. Leader Ostwald didn’t spend his pandemic by simply binge-watching television or learning to bake bread. In the early days of it, he kept his tuba chops in shape by performing “God Bless America” each night, serenading those in the medical profession, as well as those in his Upper West Side neighborhood.

As the summer of 2020 began, Ostwald took his music outdoors into Riverside Park, calling the best musicians in town to get together multiple times a week to perform for an audience who didn’t normally get to hear his music at his usual homebase of Birdland. Playing for children and dancers, and folks just strolling by energized the band and made the Riverside Park performances one of the truly bright spots in a dark time. Another outdoor concert climaxed 2021 as Ostwald brought his band to the historic Newport Jazz Festival for the first time, wowing the crowd with its exciting, swinging brand of traditional jazz.

As 2022 began, Ostwald headed back into Birdland, where he continues to perform every Wednesday at 5:30 p.m. In May, he celebrated 22 straight years at the venue, something that’s almost unthinkable for a band playing his brand of jazz. But like his hero, Louis Armstrong, Ostwald’s music has proven to be appealing to all audiences of all ages, and not just hardened jazz fans.

Ostwald has been a longtime favorite in Toms River, NJ, having performed at the Grunin Center on the Ocean County College campus three times in previous years, packing the house each time. On June 12, Ostwald’s tuba will be joined by a truly all-star aggregation including Joe Boga on trumpet, Dan Block on reeds, Randy Reinhardt on trombone, Arnt Arntzen on banjo, and Alex Raderman on drums. Though the music of Louis Armstrong remains at the forefront of their repertoire, attendees can also expect dashes of Duke Ellington and other favorites from early jazz and the Great American Songbook.

The New Jersey Jazz Society is a proud sponsor of the Jazz on a Sunday Afternoon series. Tickets are available at grunincenter.org or by calling the box office at (732) 255-0500. — RICKY RICCARDI