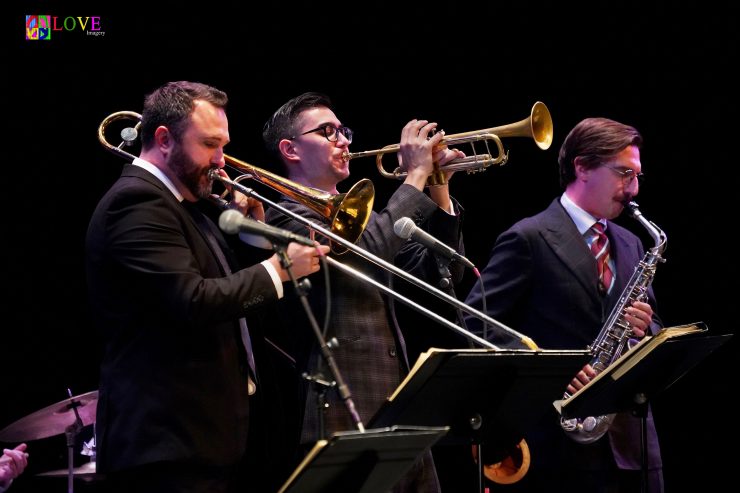 Sunday Afternoon with the Count and the Duke

The music of Count Basie and Duke Ellington was alive and well on Sunday, April 24, as the Danny Jonokuchi & The Revisionists septet lit up the main stage at the Jay and Linda Grunin Center for the Arts in Toms River, NJ.

As one Toms River resident told a newjerseystage.com writer and photographer: “Those were terrific arrangements of the classics. Overall, it was an excellent afternoon of music played by consummate musicians.”

As previously reported in Jersey Jazz Magazine, (“Rising Star”, March 2021), a virtual big band version of The Revisionists won the first-ever “Count Basie Great American Swing” contest in September 2020 with its performance of “One O’Clock Jump”. At Grunin, the first half of the concert was devoted to music from Basie, and the second half was devoted to Ellington.

Jonokuchi has a roster of 23 musicians who move in and out of his bands, depending on availability. At the Grunin concert, he announced the self-release of a new album called Together Again, which features all 23 artists as well as some of the tunes played at Grunin such as “One O’Clock Jump”, “Shiny Stockings”, “In a Mellow Tone”, and “Take The ‘A’ Train”. The album, he said, “showcases the recordings we made in times of isolation as well as our in-person studio recording. We’re thrilled to be ‘Together Again’.”

Upcoming for The Revisionists: On May 27, the band is playing at the International Lindy Hop Championships at the Edison Ballroom in New York City; on June 2 the band will be at Lincoln Center’s Oasis Stage during the Summer For The City series; and, on June 8, there will be a CD release party for Together Again at The Django in Tribeca.

As the crowd left the Grunin auditorium on April 24, Jonokuchi expressed his excitement about being able to play in front of live audiences again. “It was such a pleasure to play here today,” he told newjerseystage.com, “in a theater where the music sounds so good! Also, to have such an attentive audience that understands the music and loves it was a real treat, too.”

The New Jersey Jazz Society is a proud sponsor of the Grunin Center’s Jazz on a Sunday Afternoon series. Next up, the Charlie Apicella Trio, featuring special guest Don Braden, on Sunday, May 22. For tickets and information, log onto grunincenter.org or call (732) 255-0500.