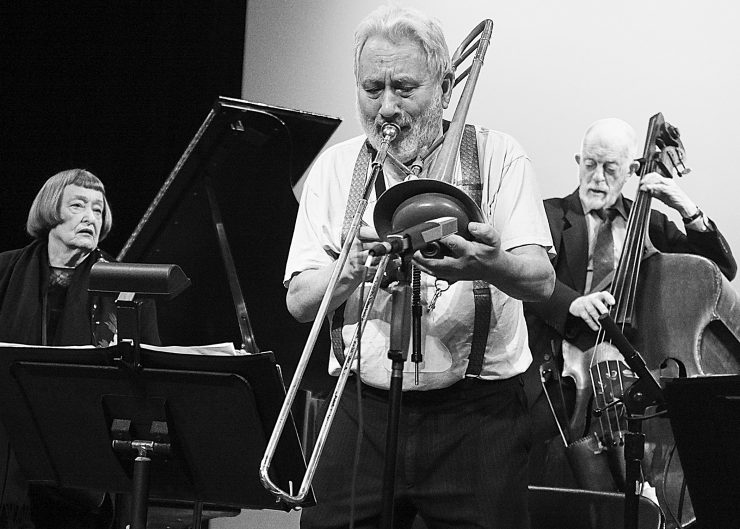 With the decline of Covid, the music scene is slowly getting back to normal, and in New York City that means the return of Jack Kleinsinger’s Highlights in Jazz. On a two-year hiatus due to the pandemic, New York’s longest-running jazz concert series marked the start of its 49th year in March with “Ellington Everlasting” featuring trombonist Art Baron and the Duke’s Men with guest vocalist Sheila Jordan. The Duke’s Men lineup included saxophonists Mark Gross and Mark Hynes, pianist James Weidman, and jazz veterans Bill Crow on bass and Bernard Purdie on drums (from left, in photo above, Jordan, Baron, and Crow at rehearsal).

The audience was treated to an evening of often bouncy Ellingtonia that, despite the theme, seemed more like a concert of small group jazz than a strict tribute to Duke. Jordan was backed by the rhythm section on a rendition of “Lush Life,” twisting the words gloriously. Her singing on “Squeeze Me” was a stream-of-consciousness solo with a little scat and a little straight vocal. The National Endowment for the Arts Jazz Master was just one of the highlights. Crow and Purdie provided rock-solid support for every tune the band played, helping the group sound like an aggregation twice its size.

Despite the unexpected layoff and a less-than capacity crowd, Kleinsinger told the audience of his enthusiasm for driving his series forward through the half-century mark. “I’m not packing it in,” he said, adding that he was proud of getting youngsters in the auditorium seats. “We have a 10-year-old kid here,” he said. “My father took me (to a jazz concert) when I was that age.”

The concert series resumes at 8 p.m., Thursday, May 12, with “Return of the Jam Session,” a time-tested theme of many Highlights in Jazz concerts over the years. Kleinsinger credits Norman Granz with planting the seed in his head when he saw a Jazz at the Philharmonic featuring Billie Holiday as a “surprise guest.” While he always gives his concerts themes, inevitably audiences are treated to mix-and-match setups reminiscent of the productions of Granz and Newport Jazz Festival founder George Wein.

The lineup for the May concert will include reedmen Peter and Will Anderson, trombonist Wycliffe Gordon, pianist Ted Rosenthal, drummer Victor Lewis, guitarist James Chirillo, and trumpeter Brian Lynch.

Tickets for the May concert are $50, $45 for students. It will be held at the Borough of Manhattan Community College Performing Arts Center, 199 Chambers St., New York City. Masks and proof of vaccination are required by the college. Tickets are available at the box office or by mail via self-addressed, stamped envelope at Highlights in Jazz, 7 Peter Cooper Rd.,11E, New York, N.Y. 10010. –PHOTO AND STORY BY MITCHELL SEIDEL

Sunday Afternoon with the Count and the Duke