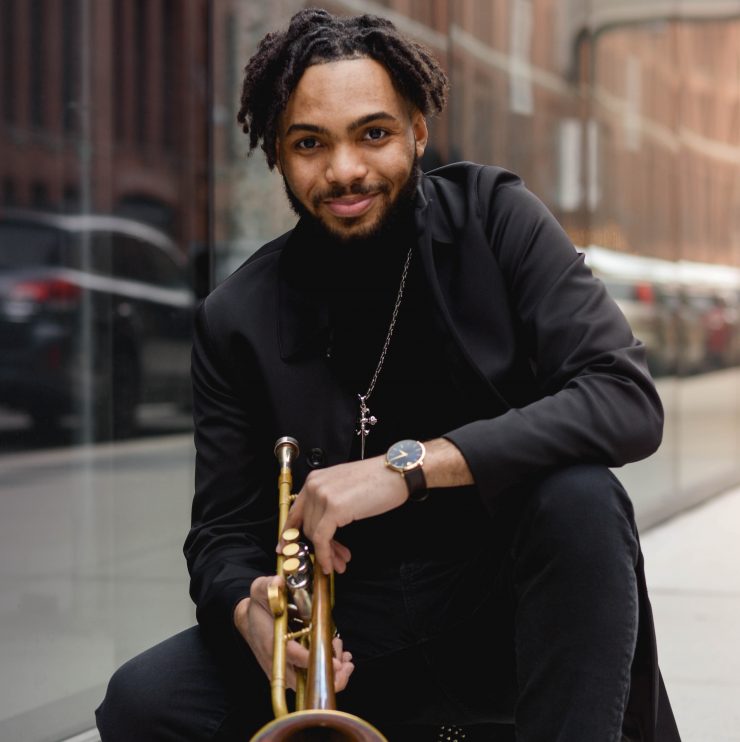 **Complimentary April Jersey Jazz Content** This is one of two articles from the April 2022 issue of Jersey Jazz Magazine being made available to everyone. For complete access to all articles in our award-winning Jersey Jazz magazine, please join the New Jersey Jazz Society by clicking HERE.

Anthony Hervey was in the sixth grade when he discovered jazz. “My mother encouraged me to play trumpet because my grandfather played trumpet,” he said. “I was very reluctant to do so, but she convinced me to do it and said I could quit after a year if I wanted to.”

Then, Hervey was casually watching television and noticed a documentary about Blue Note Records. “I just happened to click it on because it sounded interesting,” he recalled. “As soon as I clicked on the channel, there was this clip of Freddie Hubbard playing a solo unlike anything I had heard in my life. I said, ‘I want to do what he’s doing.’” The clip was the Herbie Hancock Quintet playing Hancock’s “Cantaloupe Island” with Ron Carter on bass, Tony Williams on drums, and Joe Henderson on tenor saxophone. “I didn’t know who they were.” Hervey said. “I didn’t even know it was Freddie Hubbard when I was watching it. But, in time, I found out.”

From that point on, Hervey began listening to any jazz he could possibly find. “My grandfather, he really liked music, so when he found that I was trying to listen to more jazz, he would burn CDs for me. They would have Duke Ellington and Louis Armstrong, and then they would have Chris Botti and Maynard Ferguson. It was just all over the place. I didn’t know the difference. I knew it was all good music.”

In seventh grade, Hervey, who grew up in Miramar, FL, just north of Miami, started taking trumpet lessons from a local instructor, Mike Shaw. When asked about Hervey, Shaw said, “He is the most gifted and talented student I have ever had. He has an amazing ear for jazz and possesses a natural talent for music. In the past, I have had students who either excel at improvisation or who take a more methodical approach to musical performance. Anthony is rare in that he possesses both abilities. He intuitively loves music, yes; but he also has an insatiable curiosity about the ‘how’ and ‘why’ behind it.”

Shaw recalled one instance when Hervey was asked to listen to, prepare, and transcribe a Wynton Marsalis solo for his next lesson. “Not only would he transcribe it and play it for me,” Shaw said, but “he would play three other variations he made of it in different styles.”

Hervey attended Dillard Center for the Performing Arts High School in Fort Lauderdale, and the Jazz Ensemble was a finalist in Jazz at Lincoln Center’s Essentially Ellington competition all four years he was there. Hervey was an Essentially Ellington outstanding trumpet soloist each year, and in his senior year, he received the Ella Fitzgerald Outstanding Soloist Award, for best soloist at the event.

Every year at Dillard, Hervey said, “We were trying to make sure our music was good enough so we could compete (in Essentially Ellington). Mr. Dorsey (Christopher Dorsey, Director, Jazz Ensemble) wanted us to sound like a pro band. It was really nice to be able to be around all the people in the Jazz at Lincoln Center band. It’s one of the best bands in the world, and every member of that group has knowledge to share. There were also so many great students from other schools. I have formed strong friendships with many of them, and we cross paths all the time whether we’re playing or hanging. It’s a community.”

After graduating from Dillard, Hervey attended the Juilliard School in New York, graduating with a Bachelor’s Degree in Music in 2019 and a Master’s Degree in 2020. He stayed in New York after graduating and, in February 2020, opened for tenor saxophonist Branford Marsalis with a quartet called Citizens of the Blues. That quartet included pianist Isaiah J. Thompson, another Jersey Jazz Rising Star (November/December 2020), bassist Philip Norris, and drummer Domo Branch. The drum chair rotates among several performers, but Hervey, Thompson, and Norris started the group a few years ago when they were all at Juilliard. “We have similar ideals when it comes to music and life values,” Hervey said. “We focus on the blues, and we’re rooted in music that has a groove and swings.”

Hervey also performed on bassist Christian McBride’s 2019 Grammy-nominated Mack Avenue big band album, For Jimmy, Wes and Oliver. That happened, he said, “super last minute. One of the trumpet players couldn’t make the recording session. I had just met Christian McBride a few months prior to that. So, I guess he thought about me. He said, ‘Can you come and make this?’ And, I’m on the record.”

Last summer, Hervey was part of a group called Young Stars of Jazz that performed at Jazz at Bryant Park, part of the Bryant Park Picnic Performances that took place throughout the summer in New York City. Other members of the group were Thompson, alto saxophonist Alexa Tarantino (March 2022 Jersey Jazz cover story), tenor saxophonist Julian Lee, bassist Endea Owens, and drummer Kyle Poole. “That was amazing,” he said. “There was so much energy and fire on the stage. We played some Jazz Messengers. We played some of Ellis Marsalis’ music. Then, everybody brought some of their own music. Everybody was at the top of their game.”

In November 2021, he was one of four ‘Young Lions’ featured on trumpet in a Jazz at Lincoln Center concert entitled “Wynton at 60”, celebrating the 60th birthday of trumpeter Wynton Marsalis, who is JALC’s Artistic Director. Marsalis has called Hervey a “beautiful trumpet player of the first magnitude.”

On April 17, the 25-year-old Hervey will be part of a “Jazz In The Key of Ellison” concert at the Kimmel Cultural Center in Philadelphia. The concert will celebrate the life of the writer, Ralph Ellison, presented in music, words and images. Ellison, the author of the novel, Invisible Man, was also a talented trumpeter. The music will be provided by the Andy Farber Jazz Orchestra. “Andy Farber was my arranging teacher at Juilliard,” Hervey said. “Ralph Ellison was a great writer as well as a trumpeter. He was friends with a lot of jazz artists from Louis Armstrong to Thelonius Monk. Jazz music was a backdrop to his life and writings. This show celebrates that aspect of Ellison.” Farber describes Hervey as “an expressive player with a rich, bouncy tone. He’s a great listener and is always present to what is going on around him. That makes him valuable as a soloist and an ensemble player.”

On May 7, Hervey will perform in an eclectic concert led by Jon Batiste at Carnegie Hall.  Called “American Symphony,” it will salute musical visionaries such as Duke Ellington, James Reese Europe, Mahalia Jackson, and Nina Simone. “I’m really excited about this concert and looking forward to it,” he said.

Although Freddie Hubbard was Hervey’s first jazz influence, others who have impacted his career include the late trumpeter Roy Hargrove, Wynton Marsalis, and pianist/violinist Nicole Yarling, an Adjunct Professor of Voice and Composition at the University of Miami, who runs a monthly First Friday Jam for young musicians in Miami, sponsored by the Gold Coast Jazz Society.

“I miss Roy all the time,” Hervey said. “My first two years in New York, I remember seeing him at Smalls. Sometimes, I played in the Evan Sherman Big Band and Roy would sit in with us. (Drummer Evan Sherman was Jersey Jazz’s Rising Star in March/April 2020). Most people on that level — you’re not going to see them in the clubs every night. Roy was one of the few who was actually there, at the jam sessions with the younger generation.”

Wynton Marsalis is “by far, one of my favorite trumpet players. Also, I’ve gotten to know him over the years. He’s a mentor of mine. We talk about trumpet and life a lot. I’ve learned so many things from him. He’s taught me that if you believe in something and are serious, then it matters. We have spent a lot of time talking about sound. He approaches the trumpet in a way that is casual, like a singer. You ever notice that he’ll sometimes move his trumpet to the left of the room and then to the right? He’s actually playing to people. That has totally changed the way I approach trumpet and communicate with audiences. I hope I’m able to help others in the same way he’s helped me.”

Yarling said Hervey began attending her jams when he was in middle school. “He was super shy but extremely focused at an early age,” she recalled. “He was one of the students who really studied, not only jazz, but the instrument. I created a program in Miami called the Jazz Education Community Coalition (JECC). He would attend workshops and perform with the students. Much later, he would return as a part of the concert series. He is one of the most definitive examples of what great mentorship does for young musicians. I’m so proud of him!”