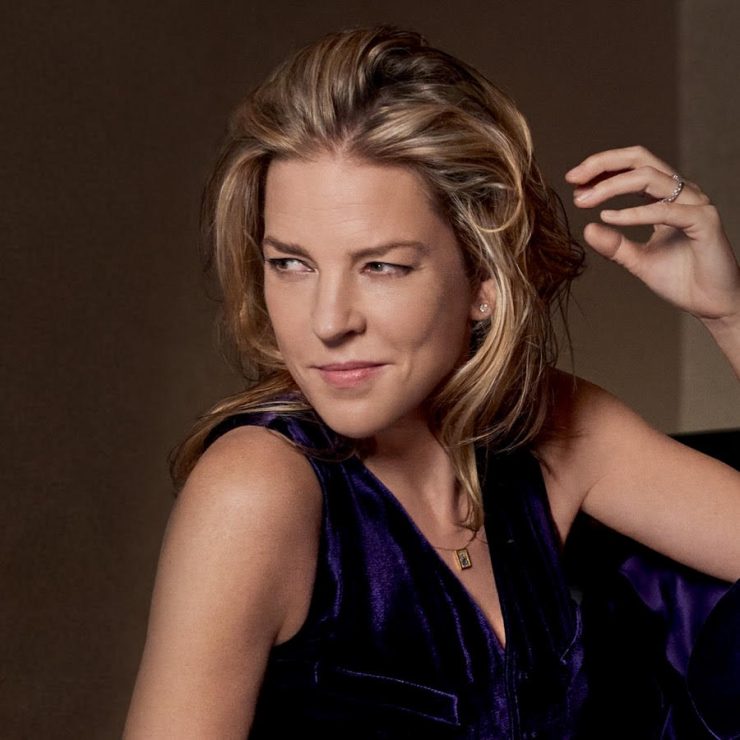 **Complimentary April Jersey Jazz Content** This is one of two articles from the April 2022 issue of Jersey Jazz Magazine being made available to everyone. For complete access to all articles in our award-winning Jersey Jazz magazine, please join the New Jersey Jazz Society by clicking HERE.

Diana Krall grew up listening to great piano players because her father, a stride pianist, “had an incredible record collection of 78 rpms. I was very lucky to have that foundation.”

In an email interview before her April 3rd concert at the New Jersey Performing Arts Center, Krall said that, “Oscar Peterson, Monty Alexander, and Bill Evans were the really important artists for me as a young piano player in high school, not to forget playing along with Elton John records in our basement.

“I grew up on Vancouver Island, Canada,” she continued, “but I got a chance to see both Oscar Peterson and Monty Alexander perform live when I was about 16. Those experiences definitely changed my life.” As for Bill Evans — “I love Bill Evans. The first recordings I heard were given to me by my high school band director, Bryan Stovall. They were Live at the Village Vanguard (Riverside: 1961) and Waltz for Debby (Riverside: 1962). Then, I heard the albums with Tony Bennett and Claus Ogerman, and, of course, Kind of Blue (the classic 1959 Columbia Miles Davis album featuring Evans on piano).”

The late pianist Jimmy Rowles has been credited with encouraging Krall to add vocals to her piano playing when she took lessons from him as a teenager in 1983. “Jimmy Rowles,” she said, “was every singer’s favorite piano player, but he was my favorite singer! The time I spent with Jimmy as his student was so important. We shared a love for songs, especially more obscure ones, and he just said in that gravelly tone, ‘If you want to sing, just sing.’”

Among the many other vocalists accompanied by Rowles were Sarah Vaughan on Sarah Vaughan and the Jimmy Rowles Quintet (Mainstream: 1974) and Carmen McRae on her live 1972 Atlantic album, The Great American Songbook. McRae once said that Rowles was, “the guy every girl singer in her right mind would like to work with.”

Krall’s 2017 Verve release, Turn Up The Quiet, was the last album produced by Tommy LiPuma, who died in March of that year. In his review, DownBeat’s Bobby Reed pointed out that, “At this point in her career, Krall knows how to put her own distinctive stamp on decades-old standards, making them sound fresh and vibrant, while still honoring the melodies that Great American Songbook fans know so well.”

LiPuma produced 11 albums for Krall, beginning with the 1994 GRP recording, Only Trust Your Heart. Her 2020 Verve album, This Dream Of You was described in a press release as, “a loving conclusion of Diana’s 25-year working relationship with Tommy LiPuma. Shortly before LiPuma’s passing in 2017, the producer and artist discussed the abundance of great music recorded at their last sessions together. LiPuma was adamant that this music should be completed and issued. Krall and engineer, Al Schmitt, therefore mixed and sequenced the album for this 2020 release and, as such, honor their great and much-missed friend.”

“I was so lucky to have worked with Tommy LiPuma and engineer, Al Schmitt,” Krall said. “We were such great friends. I’m very excited to play some new songs from that album (This Dream Of You). All those memories and happy times stay with me as we begin again.”

Krall has been nominated for nine Grammy Awards and won two, for Best Jazz Vocal Album: When I Look in Your Eyes (Verve: 1999), and Live in Paris (Verve: 2002). She also had eight albums that debuted at the top of the Billboard Jazz Albums chart and won 10 Juno Awards, presented annually to Canadian artists and bands.

When selecting songs for an album or performance, she said, “I just pick songs I like, in which I can find a story, whether it is Joni Mitchell or Irving Berlin. But, about the greatest composer I can think of is Duke Ellington.”

Her 1996 Impulse! album, All For You, was dedicated to Nat King Cole. She described it as “a very special album. My manager at the time, Mary Ann Topper, and Andre Menard (Co-Founder and Artistic Director of Festival International de Jazz de Montreal) booked us for a two-week residency at a club at the Montreal jazz festival playing a tribute to the Nat King Cole Trio. Bassist Paul Keller, guitarist Russell Malone, and I really had time to work things out before we went in to record.”

Looking ahead to the April 3rd NJPAC concert, Krall said, “I will be so happy to be back on the stage again with my longtime friends and colleagues, Robert Hurst on bass, Karriem Riggins on drums, and Anthony Wilson on guitar,” she said. “I know we will be emphasizing love, and we have a lot of songs in our repertoire that talk about that. We are all so excited to play for you again.”

Before ending the interview, Krall added, “I have to mention Shirley Horn. She was totally at one with her piano. Joni Mitchell and I went to see Shirley and her extraordinary trio in LA one evening. We all sat at the bar, smoking cigarettes, and totally digging every moment. That was a perfect night.”

Diana Krall’s NJPAC concert is at 7:30 p.m. on Sunday, April 3, in Prudential Hall. For information about tickets, log onto njpac.org. Covid-19 vaccination card or proof of negative Covid test is required.