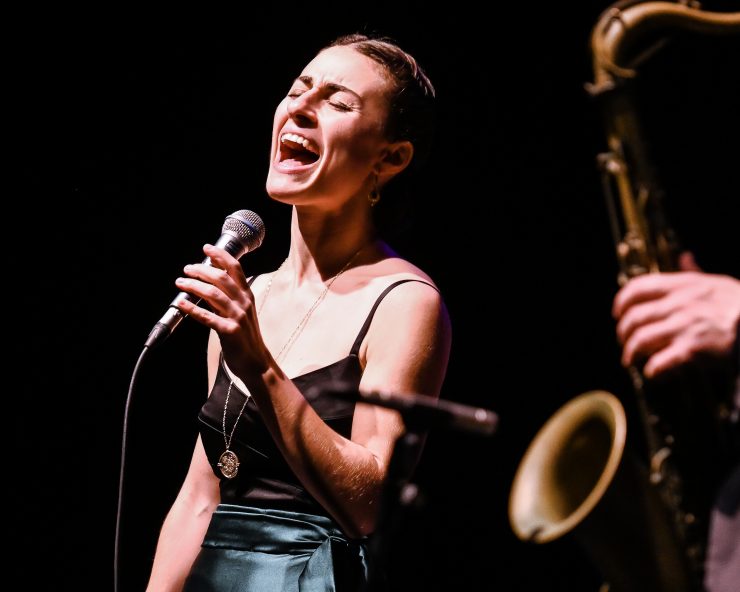 When pianist Emmett Cohen performed at New York’s Birdland in March, he invited guest artists to join his trio each night. One of those guest artists was vocalist Lucy Yeghiazaryn, and BroadwayWorld’s Stephen Mosher wrote that, “once Ms. Yeghiazaryn was on board, the musicality of the night moved to a new level.” Describing the vocalist as “a fascinating new personality,” he added that she “really livened things up for the crowd.”

Yeghiazaryn will be the featured performer this month at the New Jersey Jazz Society’s Virtual Social being streamed at 7 p.m. on Saturday, April 23. “I generally cover tunes from the great American Songbook,” she said, because, “there are so many moods and stories in there that it offers endless possibilities. So, I’ll never stop singing it. I’ll probably do some stranger tunes from Kurt Weill as well.”

Shortly after her first album, Blue Heaven, on the Cellar Live label, was released in 2019, Jazz Weekly’s George W. Harris wrote that, “There are so many female vocalists out there that simply sound the same that it’s a treat when you find someone as fresh as Lucy Yeghiazaryn . . . If you want music with stories and landscapes, this lady is your tour guide.”

Her second album, In Her Words, a collaboration with vocalist/composer Vanisha Gould, was funded by the New York Foundation for the Arts. Half the songs were original compositions by Gould, and the others were standards, such as Maurice Yvain and Channing Pollack’s “My Man”, and Rodgers and Hart’s “Nobody’s Heart Belongs to Me”. Reviewing that album, DownBeat’s Gary Fukushima pointed out that Yeghiazaryan, “crafts melodies with an exquisitely tempered, full-bodied voice tailor-made for illuminating the great torch songs of a bygone era.”

It is significant that the Social featuring Yeghiazaryn is one week before International Jazz Day, celebrated on April 30. Her family migrated from Armenia to West Milford, NJ, in 2001. In middle school, she joined the Jazz for Teens program at the New Jersey Performing Arts Center. “They had a rhythm section of older guys that would come in and play with the singers,” she told Jersey Jazz Magazine’s Schaen Fox. Some of those “older guys” were tenor saxophonist/ flutist Don Braden and keyboardist Mike LeDonne. “I did that for a few years,” she added, “and started actually gigging around New Jersey.”

The April 23rd Social will be streamed at 7 p.m. on the njjs.org website as well as on the NJJS Facebook page and YouTube channel. There is no admission charge, but donations are welcome and encouraged.

Jazz on a Sunday Afternoon: Danny Jonokuchi & The Revisionists