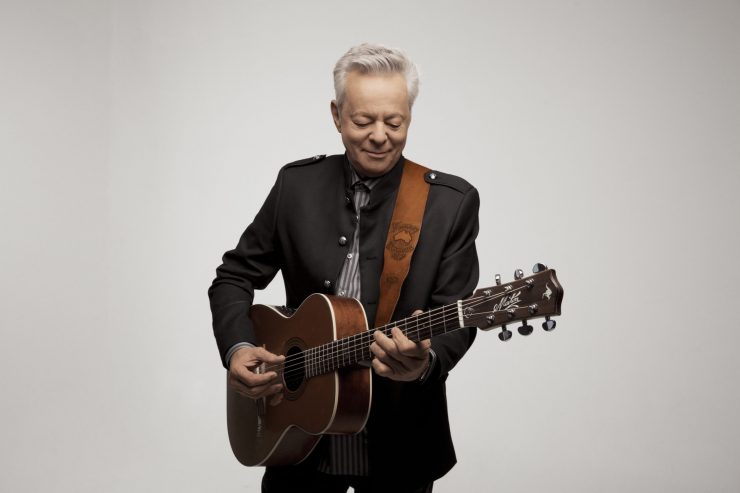 “When I was a kid, I wanted to be in show business. Now, I just want to be in the happiness business. I make music, and you get happy. That’s a good job.” Luckily for us, guitarist Tommy Emmanuel will make us happy at the South Orange Performing Arts Center on Thursday, April 14.

Emmanuel likes to perform in New Jersey every year. “The thing about Jersey,” the Australian guitarist said, “is places that are only 40 miles apart are a whole different market. It’s such a heavily populated and diverse state. It’s amazing. I can play one place and then go play somewhere, 50 miles away, and it sells out, and it’s a whole different crowd. And that’s pretty amazing, really. England is like that, super saturated with people, but each area is different from the other. I love that about that part of America.

“And,” he added, “I’m always up for playing for the people. I’m willing to play big places, small places, medium places, standing room, rock clubs, jazz clubs, folk clubs, you name it. I’m willing to play at them. If you want to build an audience and create a demand, you’ve got to put the work in yourself. No one’s going to do it for you and record sales or views on YouTube do not equate to ticket sales. The only way you’re going to get your ticket sales up and get to more people is by building the crowd yourself by hand.”

Another thing Emmanuel likes about New Jersey is that it was the home of great guitarists such as Les Paul and Bucky Pizzarelli. “I got to know Les Paul, who’s from Mahwah,” he said. “Les, encouraged me, invited me to come and play with him. He was like a daddy to me. We became really good friends, and we were real good friends to the end.

“I said to him, during that year before he passed away, I said, ‘Les, I don’t know what you’re doing. But I think you’re playing better right now that you’re 93 than you have in the previous two years.’ He said, ‘Well, I better be because I’m practicing more.’ How about that? Jersey definitely has that history, especially its association with jazz guitar: Bucky Pizzarelli and people like that. Some amazing people come out of there.”

At SOPAC, Emmanuel will be playing with an English guitar player named Mike Dawes. “He’s completely different than me,” Emmanuel said. “There’s nothing old school about him. It’s all young, fresh, different, tasty, and creative. I like having a player that’s so different on my shows. He opens and then I play my set, and then I bring him out We hose the hell out everyone at the end.” No bass and drums? “We don’t need no stinking band; we are the band.”

Emmanuel’s performance is at 7:30 p.m. on April 14 in SOPAC’s Jennifer and Tony Leitner Performance Hall. For information about tickets, log onto sopacnow.org or call (973) 313-2787. -SCHAEN FOX