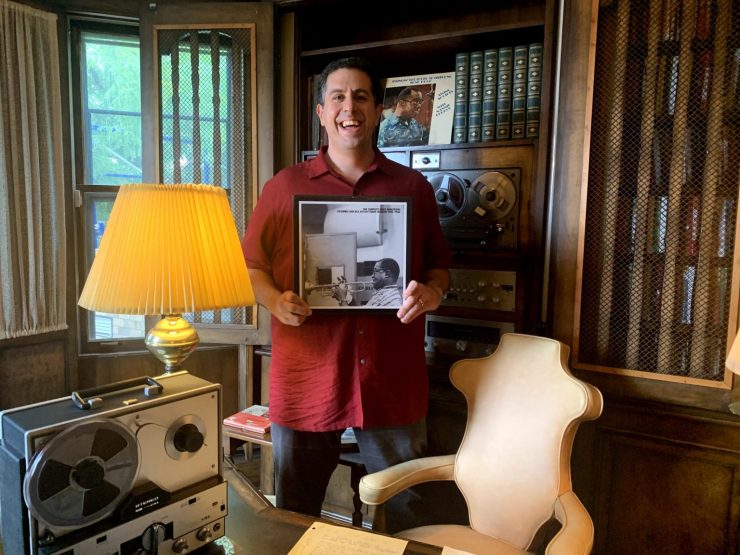 The Complete Louis Armstrong Columbia & RCA Victor Studio Sessions 1946-66 was released on April 10, 2021, via Mosaic Records. Alongside the CDs, the boxed set included more than 40 mostly-unpublished photos from the collections of the Louis Armstrong House Museum as well as an extensive 30,000 word essay written by Riccardi, who has written two books about Armstrong: What a Wonderful World: The Magic of Louis Armstrong’s Later Years (Pantheon: 2011) and Heart Full of Rhythm: The Big Band Years of Louis Armstrong (Oxford University Press, New York: 2020). The November/December 2020 Jersey Jazz cover story featured a review of Heart Full of Rhythm and an interview with Riccardi.

“The musical contents of this set represent the exact Armstrong recordings that changed my life when I was 15 years old. This is a dream come true,” Riccardi said in a statement when he learned of his Grammy nomination. “I learned so much of what I know about jazz history from what I read in liner notes penned by past Grammy recipients.”

In addition to being Director of Research Collections for the Louis Armstrong House Museum, Riccardi runs the online blog, “The Wonderful World of Louis Armstrong,” and has given lectures on Armstrong at venues around the world, including the Institute of Jazz Studies, the National Jazz Museum in Harlem, the Bristol International Jazz and Blues Festival and the Monterey Jazz Festival. In June 2021, he gave a presentation on Armstrong in the initial program of a virtual Jazz Education Series, co-sponsored by the Metuchen Arts Council and the New Jersey Jazz Society. In December 2019, Riccardi hosted a “Louis Armstrong Christmas Celebration” at the NJ Jazz Society’s December Social at Shanghai Jazz in Madison, NJ. He played a recording of Armstrong’s recitation of “The Night Before Christmas”, relayed some anecdotes about Armstrong, and took questions from the audience. He also played some tunes associated with Armstrong on the piano, accompanied by trumpeter Danny Tobias and drummer Rich Noorigian.

Riccardi has taught Armstrong courses for Jazz at Lincoln Center’s Swing University and at Queens College and has co-produced numerous Armstrong reissues in recent years. He has a degree in Jazz History and Research from Rutgers University and an Associate Degree from Ocean County College in Toms River, NJ, where he lives with his wife and three daughters.

Jazz musician winners at this year’s Grammy Awards were: