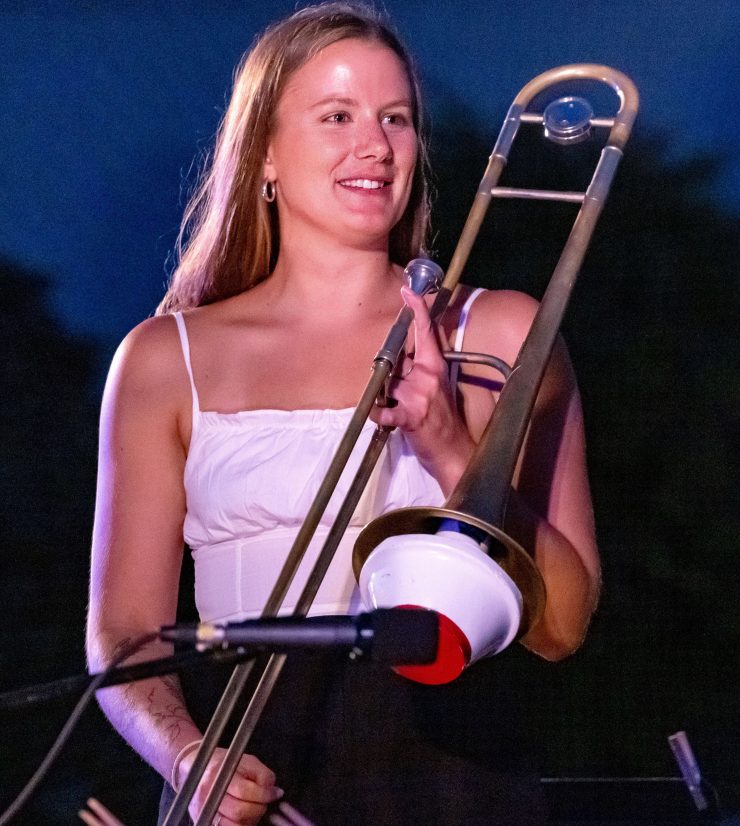 Trombonist Mariel Bildsten moved from Santa Barbara, CA, to New York to study jazz at the New School and remained in New York after graduating in 2015. She is currently the lead trombonist for Arturo O’Farrill’s Afro Latin Jazz Ensemble, and the leader of her own quintet and septet.

Her musical hero is Lawrence Brown, who played in the Duke Ellington Orchestra for several years. “He is one of my favorites,” she said, “because of the way he expressed his melodies. He would have you on the edge of your seat. His playing had a vocal style.” Playing with O’Farrill’s band on Sunday nights at Birdland, she said, “has been really wonderful, a full house every time. The music is amazing, so it’s a real treat to be part of that.”

At 7 p.m. on Saturday, March 19, Bildsten will be the featured performer at the New Jersey Jazz Society’s Virtual Jazz Social. For the past two summers, she has performed in the Morris Museum’s Jazz on the Back Deck series. And in August 2020, she released an album called Backbone on the Outside in Music label. It was recorded at Dizzy’s Club in New York after a four-night gig had ended.

Stephanie Jones, reviewing Backbone for DownBeat, pointed out that “Bildsten’s vision for the album included replicating what she considers those ‘grand moments’ in Duke Ellington’s and Count Basie’s big band arrangements — but orchestrated for a quintet.” Bildsten told Jones that, “Arranging has been an important part of bringing together how I think about music, how these moments ascend or descend into something else, thinking about them as transitional points to get into the melodies of these songs.”

When Bildsten’s septet played the music of Ellington and Basie at the Morris Museum’s Bickford Theatre in January 2020, Jersey Jazz Magazine reported that, “Audience members left feeling encouraged that the future of jazz is in good hands . . . The refreshing aspect of this concert, in addition to the excellence of the musicians, was the pure joy expressed by everyone on stage, a passion and excitement that permeated the entire audience. This is what jazz is (or should be) all about.”

The March 19th Social will be streamed on the njjs.org website as well as on the NJJS Facebook page and YouTube channel. There is no admission charge, but donations are welcome and appreciated.

Funding for the NJJS Socials has been made possible, in part, by funds from Morris arts through the New Jersey State Council on the Arts/Department of State, a partner agency of the National Endowment for the Arts.