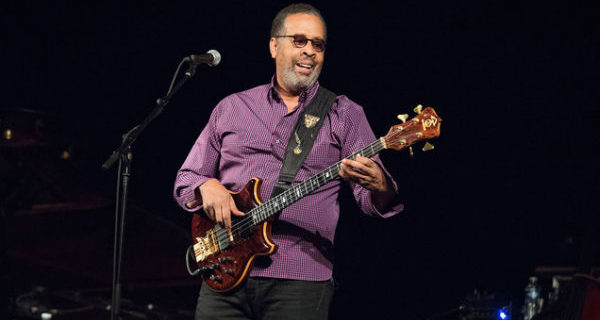 **Complimentary March Jersey Jazz Content** This is one of two articles from the March 2022 issue of Jersey Jazz Magazine being made available to everyone. For complete access to all articles in our award-winning Jersey Jazz magazine, please join the New Jersey Jazz Society by clicking HERE.

In 1982 the National Endowment for the Arts established a Jazz Masters Series Award and government grant given annually to the country’s most impactful jazz musicians. The first recipients 40 years ago included Roy Eldridge, Dizzy Gillespie, and Sun Ra. The list has since expanded to include many more exceptional jazz artists over the past four decades. Here are brief profiles of this year’s recipients: Stanley Clarke, Billy Hart, Donald Harrison Jr, and Cassandra Wilson.  They will each receive a $25,000 award and will be honored at a concert on Thursday, March 31 at a concert produced by SF JAZZ held at the San Francisco JAZZ Center. — JAY SWEET

Stanley Clarke (pictured) is quite possibly the most impactful electric bassist of all time. His ability to showcase the instrument as a solo vehicle in the early 1970s set a new standard for electric bassists. In addition to his prowess and influence as an electric bassist, Clarke is also widely celebrated for his work on the upright bass, as a film composer, and as a record producer.

Born in Philadelphia in 1951, Clarke began playing both the electric bass and the double bass as a teen. His talents were quickly recognized, and after graduating from Philadelphia’s College of the Performing Arts, he moved to New York and began working with impactful jazz musicians such as Stan Getz, Joe Henderson, and Art Blakey, among others. In 1972, Clarke connected with pianist Chick Corea, and the two formulated the supergroup, Return to Forever. By mixing electric rock, Latin forms, and jazz, Return to Forever became one of the most famous jazz fusion bands.  During this time, Clarke also began releasing highly experimental solo albums, including his 1976 Nemperor Records album School Days, which inspired an entire generation of bass players.

By the end of the ‘70s, Clarke started working on some music outside of jazz, including projects with Paul McCartney, Keith Richards, George Duke, and Stewart Copeland. In addition, he has written dozens of award-winning compositions for movies and television, including scores for Boyz in the Hood, Passenger 57, and Pee-wee’s Playhouse.

However, Clarke never abandoned his jazz roots and continued to showcase jazz with his groups and as a sideman.  A three-time Grammy Award winner, he often gives back to his community through his Stanley Clarke Foundation, a charitable organization that awards scholarships to talented young musicians each year.

Born in Washington, D.C., in 1940, Hart began performing in the early 1960s with artists such as Otis Redding, Sam and Dave, and Shirley Horn. He then offered his soulful style to such artists as Jimmy Smith, and Wes Montgomery.  By 1968, Hart had moved to New York and began working and recording with numerous jazz artists including Herbie Hancock, Miles Davis, Wayne Shorter, Stan Getz, Pharoah Sanders, Joe Zawinul, and Marian McPartland.

In 1977, he released Enchance on the Horizon label, his first of 12 records as a leader. He also remained very active as a freelance drummer.  He has been one of the most sought-after and recorded jazz drummers and can be heard on more than 600 albums, including such classics as Pharoah Sanders’ Karma (Impulse!: 1969), Herbie Hancock’s Mwandishi (Warner Bros.: 1971) , and Miles Davis’ On The Corner (Columbia: 1972).

In addition to recording and performing, Hart became more active as an educator around 1990 and began teaching at institutions such as Oberlin Conservatory of Music, New England Conservatory, The New School, New York University, and Western Michigan University. A resident of Montclair, NJ, he performed this past September at the Montclair Jazz Festival. Pianist Dave Kikoski, who played with him there, told Jersey Jazz (December 2021), “I’ve been a huge Billy Hart fan since I heard him on the Hal Galper record, Reach Out. The way he spurs the soloist on with such power and imagination without ever being obtrusive is truly amazing.” Hart will long be remembered as one of the most notable jazz drummers of the second half of the 20th century.

Born in New Orleans, saxophone master Donald Harrison Jr. has impressively represented the birthplace of jazz since he began his professional career in the early 1980s. After taking a serious interest in the studies and traditions of New Orleans culture, Harrison attended Berklee College of Music. He then worked and recorded with Art Blakey and the Jazz Messengers, Terence Blanchard (as a co-leader), Roy Haynes, Clark Terry, McCoy Tyner, and Jack McDuff.

In 1990, Harrison began recording as a leader. He was widely recognized for his 1992 Candid release Indian Blues, which celebrated his New Orleans heritage, and his 1997 Impulse! release Nouveau Swing, which blends elements of swing, funk, and Latin music. Since 1990 he has been showcased on albums by The Headhunters, Eddie Palmieri, Esperanza Spalding, Lonnie Smith, Don Pullen, and Joanne Brackeen.

Harrison was named the Big Chief of the Congo Nation Afro-New Orleans Cultural Group in 1999. Congo Nation is an organization that keeps alive the secret traditions of New Orleans’ Congo Square. He has also released several notable electric jazz albums and orchestral works, has appeared in the HBO documentary When The Levees Broke and on television series such as HBO’s Treme.

In 2000, Harrison continued to showcase his creativity and intellect when he began writing material based on quantum physics. His ability to represent the musical traditions of the past with more modern forms has secured his status as one of the great modern masters of the jazz tradition.

For more than 25 years, singer/songwriter Cassandra Wilson has been one of the strongest voices in jazz. With over 20 album releases as a leader, she has combined various early American styles such as blues, country, and folk into her music. In addition to her work as a leader, Wilson has been featured on albums by Wynton Marsalis, Terence Blanchard, Luther Vandross, The Roots, among others.

Born in Jackson, MS, Wilson grew up in a musical family and began singing and playing piano and guitar at an early age. After earning her degree in mass communications at Jackson State University, she married New Orleans radio personality, Anthony Wilson. She then contacted local musicians such as Ellis Marsalis and Earl Turbinton, who served as early mentors. After a year in New Orleans, Wilson relocated to New York City, where she began recording with Steve Coleman and touring with Henry Threadgill.

By 1986, Wilson started making her first recordings as a leader, showcasing her rich voice and impressive use of melodic phrasing. In 1993, her reputation and stature grew considerably when she signed with Blue Note Records leading to the release of such classics as Blue Light ‘til Dawn, New Moon Daughter, Traveling Miles, and Belly of the Sun. Wilson has received two Grammy Awards (1995-1996), The DownBeat Female Vocalist of the Year Awards (1995-1996), and several honorary degrees.