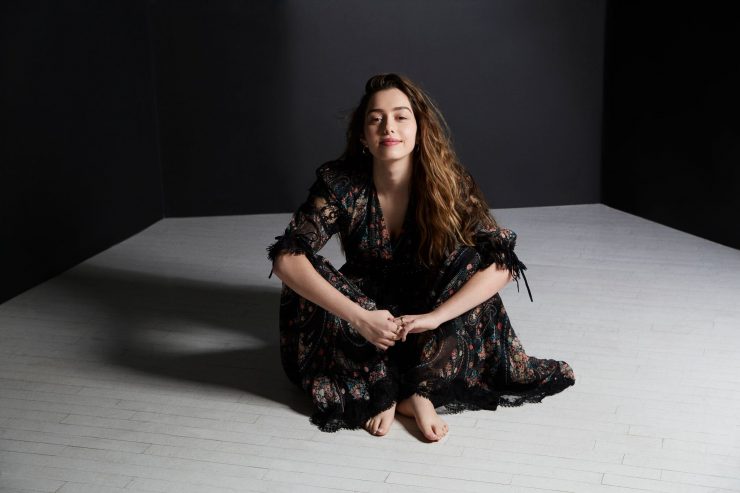 **Complimentary March Jersey Jazz Content** This is one of two articles from the March 2022 issue of Jersey Jazz Magazine being made available to everyone. For complete access to all articles in our award-winning Jersey Jazz magazine, please join the New Jersey Jazz Society by clicking HERE.

When she was eight years old, Anais Reno (now 18) began taking voice lessons from singer/songwriter Sarah Tolar. “I feel very grateful to her,” Reno said, “because after a couple of months of working together, she sensed that maybe some older American Songbook music would be good for me. So, she started to give me songs from that repertoire, and it very quickly became my favorite music to do.”

Reno and Tolar met for lessons for nearly 10 years, and said Tolar, “Her potential as an artist to create a sound or make a statement that is authentically hers is immense and has just barely begun to reveal itself to her.”

At age 12, Reno began attending Jim Caruso’s Cast Party, an open mic event held on Monday nights at Birdland. “I didn’t honestly know what I was going to be getting into,” she recalled. “I wasn’t sure what to expect. It was so much fun, and, over the next several months I developed a bond with Gianni Valenti (Birdland’s owner). Over the past five or six years, it has become somewhat of a home to me.”

Reno’s first album, Lovesome Thing: Anais Reno Sings Ellington & Strayhorn (Harbinger: March 2021) was co-produced by Valenti and Reno’s mother, classical violinist Julie Kurtzman, who performed on two tracks. “At the end of 2019,” Reno recalled, “I had done a gig at Birdland in which I sang the music of Ellington and Strayhorn. And, throughout the process of compiling that set list and working on the music, I became very aware of how human, complex, and beautiful it is. You have the duality of the darkness of it but also the beautiful, romantic, ethereal quality — some of those Strayhorn ballads like ‘A Flower is a Lovesome Thing’ and, of course, ‘Lush Life’. Then you have those wonderful Ellington tunes that we all know. And then there are some more obscure ones. Throughout that process, I realized that I had never really felt that a sector of music understood me as a person the way that music did.

“When we were trying to figure out what my first album was going to be, my mom actually suggested, ‘Why don’t you do Ellington and Strayhorn?’ And I thought it was just a brilliant idea because if you want your first album to represent who you are as a singer, in that moment, I thought there was no better way. This music just sounded like what I wanted to represent in that moment.”

Joe Lang, reviewing the album for Jersey Jazz (April 2021), wrote that, “It is rare to find a young vocalist who exhibits the maturity in her interpretation of songs that Anais Reno provides . . . This is not only an impressive debut recording, but deserves to be on any list of best vocal albums of the year.”

AllAboutJazz’s Richard J. Salvucci pointed out that the selection of Ellington/Strayhorn music for a young singer was “not without risk as the harmonic structure and lyrics of some of the compositions are better suited to a more experienced vocalist. However, Reno was undeterred, and the results are more than impressive.” Strayhorn’s “Lush Life”, he wrote, “is filled with demanding harmonies and is complex chromatic music. The lyrics tell the story of the isolation of a black man who declined to compromise his sexual identity. No small stretch for a debutante singer, but one which she reaches with assurance.” On Strayhorn’s “Take the ‘A’ Train” — “Reno’s interpretation of the composition uses the imbedded swing norms and harmonic cleverness to deliver an ‘A’ train experience.”

Reno is supported on the album by the Emmet Cohen Trio — Cohen on piano, Russell Hall on bass, and Kyle Poole on drums. In addition to Kurtzman, saxophonist Tivon Pennicott performs on some tracks. “I was talking to Gianni Valenti about who would be right to embody such sophisticated music while still bringing their own flavor to it,” Reno recalled. “Emmet Cohen, Russell Hall, and Kyle Poole immediately came to mind. I knew Emmet but had never worked with him, so it was such a wonderful surprise that the three of them were interested in the project after Gianni reached out. They did exactly what I hoped for and more: They created an atmosphere for these songs that I love so much, that was beyond what I’d heard before. I feel so grateful to them.” Cohen described Reno as “a wonderful young talent, and I was delighted to make her record. She’s mature beyond her years and has a bright future in front of her.”

While listening to Lovesome Thing, it was clear to me that Reno glides easily between ballads such as “Lush Life” and upbeat swing tunes such as Ellington’s “I Ain’t Got Nothin’ But the Blues”. She said ballads “come easier to me than swing tunes. It’s not because I don’t understand when somebody is swinging. The issue is that I tend to sometimes play with phrasing in a way that can go a little far out of the pocket on swing tunes. It’s a constant battle.”

There’s a parallel, she added, in drama. “If an actor can do comedy, well, they can also do drama. But, if they can only do drama well, they don’t necessarily know how to do comedy. You have to find the truth in everything including the absurd. I sometimes feel if somebody can swing really well, they’re doing it from an honest place. Oftentimes, they can also sing ballads. I think Sinatra sang ballads so beautifully because he swung so hard. So, I’m trying to find that balance, too. It’s an ongoing process.”

To Reno, Sinatra, “truly is the greatest of all time because of the way he could do anything, and it sounds so natural. He would be on stage and wearing a suit and tie but he had that casual coolness and that effortless about him. I feel that translated into his singing because there was so much in every single line. There was so much thought and care put into every word.

“When I was at the peak of listening to him all the time, in high school,” she said, “I was being constantly fed with all his interpretative skills, his phrasing, his incredible swing feel, the way that he sang ballads.”

Over the last couple of years, Reno has become “particularly fascinated with Carmen McRae. I listen to her constantly. I keep listening to her Carmen Sings Monk album. I adore her.”

Reno is in the second semester of her freshman year, majoring in Jazz Studies, at Purchase College’s Conservatory of Music. “I love it here,” she said. “It’s the whole college thing, and it’s a music conservatory. I love it partially because of the location. It’s close to the city, but it’s far away enough where you can still have that separation. And, the faculty here is so incredible. Pete Malinverni is running the jazz program, and he’s so passionate about it. I feel that the people in power here actually care about what they have power over. I’m taking private lessons from Alexis Cole. I’ve been enjoying that. I’m taking classical lessons, too. Here they encourage you to embrace different aspects of what you’re doing, even if it’s not directly part of the jazz curriculum. And, the spirit here is great. Everybody just wants to learn the music, and everybody is passionate. The students here are so good, it’s very inspiring to be around them.”

Cole, who is a part-time Lecturer in Jazz Voice at Purchase, pointed to Reno’s “great natural vocal talent, vulnerable interpretations, and a photographic memory for melodies and lyrics.” In addition, she said, “Anais has amazing perspective and deep desire to be a great artist who paints the song’s soul with her voice.”

“That was such a cool project to be a part of,” she said, “to be alongside so many interesting creative people who probably wouldn’t usually be found together. I never expected to be in a project like that, but I feel very honored that I was.”

In late February, Reno appeared with Malinverni, bassist Ugonna Okegwo (also a Purchase faculty member) and Purchase student drummer Simon Ribas at Chelsea Table & Stage. On March 2, she’ll be performing at The Django with Malinverni, Okegwo, and drummer Aaron Seeber, and on March 25, she’ll be with trumpeter/vocalist Benny Benack III at Chris’ Jazz Café in Philadelphia.

Reno’s love of the American Songbook has continued unabated since those early lessons with Tolar. “Because everyone loves this music,” she said, “it has a natural way of bringing people together.” Added Tolar: “Anais doesn’t just listen to music. She digests it, she dissects it, she uncovers details in a song that the casual or even the active listener might miss.” — SANFORD JOSEPHSON