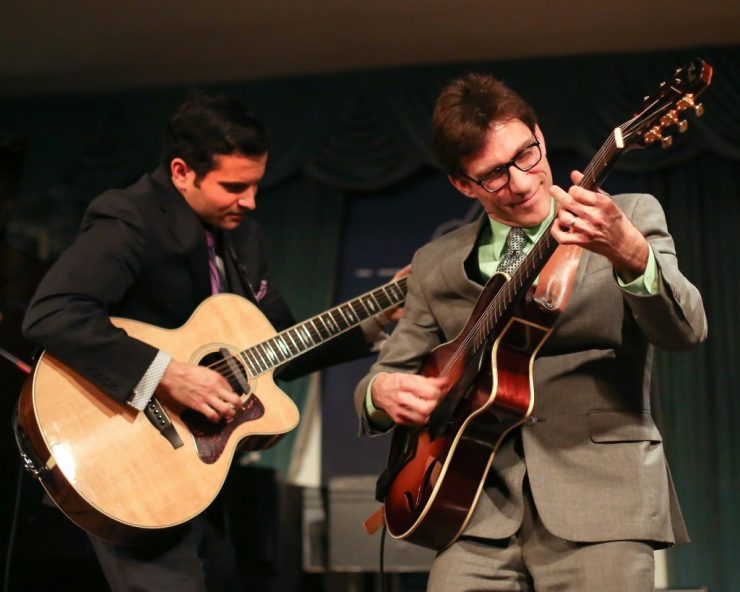 Jazz on a Sunday Afternoon: Frank Vignola and Vinny Raniolo

At the Morristown Jazz & Blues Festival in August 2019, Frank Vignola teamed up with fellow guitarist Vinny Raniolo for a dazzling performance that included American Songbook standards from Irving Berlin and Cole Porter as well as Antonio Carlos Jobim’s “Girl From Ipanema” Rimsky-Korsakov’s “Flight of the Bumblebee” and Django Reinhardt’s “Song d’Automne”.

At 3 p.m. on Sunday, March 27, Vignola and Raniolo will collaborate again, this time at the Jay and Linda Grunin Center for the Arts in Toms River, NJ. Vignola and Raniolo have shared the stage on several occasions, and Mike Joyce, reviewing their Azica album, Melody Magic, for Jazz Times, pointed out that, “the chemistry they’ve developed over the years is evident on every track here, from the opening nod to Beethoven’s Fifth to the rhythmically insinuating closer, Sting’s ‘Walking on the Moon’.”

Vignola has performed with a wide range of musical artists — from Ringo Starr and Madonna to Wynton Marsalis to the Boston and New York Pops orchestras. His PBS special, Four Generations of Guitar, with Raniolo, Bucky Pizzarelli, and Tommy Emmanuel, aired on public TV stations throughout the country in 2015. The late guitar legend Les Paul named Vignola as one of the five guitarists he admired most.

Raniolo’s recording credits include the soundtracks of HBO’s Boardwalk Empire, Woody Allen’s Café Society, and Martin Scorsese’s The Irishman. He grew up playing alto saxophone in his school band “until the guitarist showed me a ‘A’ chord on his acoustic guitar. Then I was hooked.”

At the Morristown concert, Vignola paid tribute to his mentor, Bucky Pizzarelli, who played with him and Raniolo on several occasions. “Without Bucky Pizzarelli,” he said, “we would not know jazz guitar as it is today.” Pizzarelli passed away eight months later in April 2020.

The New Jersey Jazz Society is a proud sponsor of the Jazz on a Sunday Afternoon series. To order tickets, log onto grunincenter.org or call (732) 255-0500.

Tickets will be sold in socially distanced pods. Visitors two and up must wear masks at all times when inside the Grunin Center, including when seated in the theater.