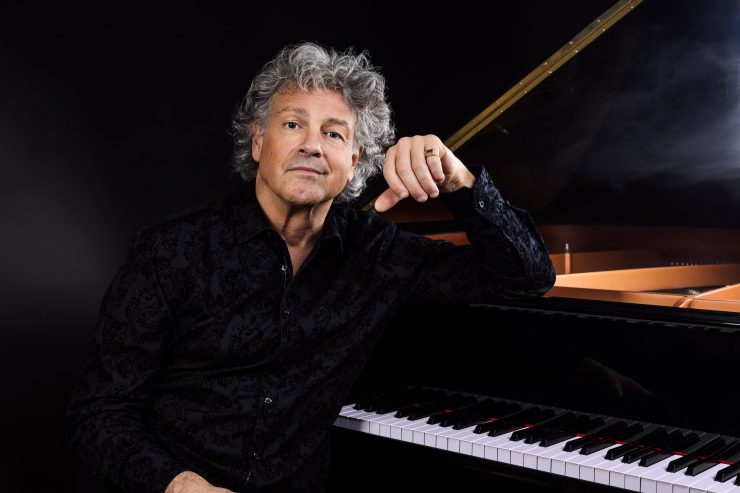 Hearing a jazz vocalist backed by a piano trio that understands the nuances of her performance is a truly satisfying experience. The Pete Malinverni Trio with Anaïs Reno at The Django provided just such an experience.

Malinverni, who heads the Jazz Studies program at SUNY/Purchase, is among the finest jazz pianists on the scene today and is also an accomplished and sensitive accompanist. His rhythm section includes bassist Ugonna Okegwo, also a SUNY/Purchase faculty member, and drummer Aaron Seeber, a SUNY/Purchase graduate. Reno is a freshman at SUNY/Purchase studying Jazz Voice (See the Rising Star feature in the March 2022 issue of Jersey Jazz).

Both sets opened with the trio setting the mood with some intense swinging. For the first set, Malinverni dipped into the program from his excellent new album of Leonard Bernstein compositions, On the Town (Planet Arts Records: 2021, reviewed in Other Views, Jersey Jazz, February 2022.) His choice was “New York, New York,” a fitting selection for this attractive club in the Roxy Hotel in the Soho/Tribeca section of Manhattan. Next up was a memorable “I Remember You.” Kicking off the second set were Malinverni’s take on the chord changes of “What Is This Thing Called Love,” cleverly titled “Good Question,” followed by “Sweet and Lovely.”

When Reno arrived on stage, she gave us on a jazzy look at “It’s Almost Like Being in Love.” Now an 18-year old with a performing maturity that belies her age, Reno recorded her debut album two years ago, releasing it last year. It is a collection of songs written by Duke Ellington and/or Billy Strayhorn titled Lovesome Thing, and is simply sublime. (See Other Views review, Jersey Jazz, May 2021.) From this source, she sang the too rarely heard “Take Love Easy,” with added support from violinist Julie Kurtzman, who also happens to be her mother. She then announced that she has recorded an album of songs by Tadd Dameron with Malinverni due for release later this year and provided a hint of the magic that is contained therein with “Sweet Life.” Her interlude concluded with “Gone with the Wind,” before the trio lit into “I Want to Be Happy.”

Before Reno appeared in the second set, Malinverni called upon Kurtzman to join the trio for “Monk’s Mood.” Reno started “Caravan” with a wordless vocal while Seeber accompanied her by drumming with his hands, leading into a unique take on this classic from the world of Ellingtonia. She then turned to the Strayhorn catalog for one of his loveliest songs, “A Flower Is a Lovesome Thing.” She concluded with “Autumn Leaves,” combining the original French lyrics with the familiar ones in English by Johnny Mercer. The trio then dug into a true jazz classic, “Blue Monk” —JOE LANG

Jazz on a Sunday Afternoon: Frank Vignola and Vinny Raniolo