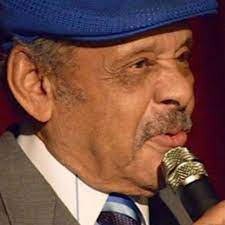 In a review of Cannonball Adderley’s 1964 Capitol album, Live Session!, AllMusic’s Ronnie D. Lankford, Jr., wrote that “one reason why Live Session! is such a special work” is that Ernie Andrews’ “warm, rich vocals offer lovely interpretations of an even dozen songs.” AllAboutJazz’s Andrew Rowan, writing about a 2004 reissue of the album, said, “Andrews projects a joyfulness that is too often missing in some of today’s more self-conscious jazz singing.”

Andrews died February 21, 2022, at the age of 94, at Conroe Regional Medical Center, near Houston. Writing on wbgo.org a few days after Andrews’ death, Nate Chinen described him as a “suave, booming baritone . . . an irrepressible fixture in postwar jazz and rhythm & blues.”

Born on Christmas Day in Philadelphia in 1927, Andrews moved to Jeanerette, LA, as a teenager, to live with his maternal grandmother’s family. In 1945, he moved to Los Angeles where he attended Jefferson High School. Some of his classmates were tenor saxophonist Dexter Gordon, saxophonist/flutist Eric Dolphy, and drummer Chico Hamilton.

After entering a talent contest at Central Avenue’s Lincoln Theater — where he worked as an usher — Andrews was approached by a songwriter named Joe Greene, who helped get him his first recording session, which included “Soothe Me”, the B-side of a novelty song called “Wrap It Up, Put It Away (Till Daddy Comes Home From the Army).” “Soothe Me” sold more than 300,000 records.

“For whatever reason,” Chinen wrote, “instead of becoming a household name, he found traction as a connoisseur’s choice, working with a brilliant array of jazz musicians.” In 1958, he joined Harry James’ band where he stayed for more than 10 years. In the ‘60s and ‘70s, he worked with bands led by Frank Capp and Nat Pierce and in the Clayton-Hamilton Jazz Orchestra.

In the mid-‘80s, he was the subject of a documentary, Ernie Andrews: Blues for Central Avenue, directed by Lois Shelton. It appeared on public television and in some movie theaters. Reviewing it for The New York Times, Jon Pareles wrote, “There’s plenty of nostalgia, but there’s also the kind of gritty detail that’s left out of too many jazz memoirs.”

In recent years, Andrews often collaborated with tenor saxophonist Houston Person. One such partnership resulted in the 2003 HighNote album, Jump for Joy. Matt Collar, in a review for AllMusic, pointed out that, “Andrews showcases his superb sense of timing and regal ‘seen-it-all’ style. Recalling both Carmen McRae and Ray Charles, the Philly native digs into an earthy and joyful ‘Sweet Lorraine’, imbues ‘You Are Too Beautiful’ with a bittersweet maturity, and fills ‘Solitude’ with the bluesy melancholy with a life truly lived. Jump for Joy indeed!”