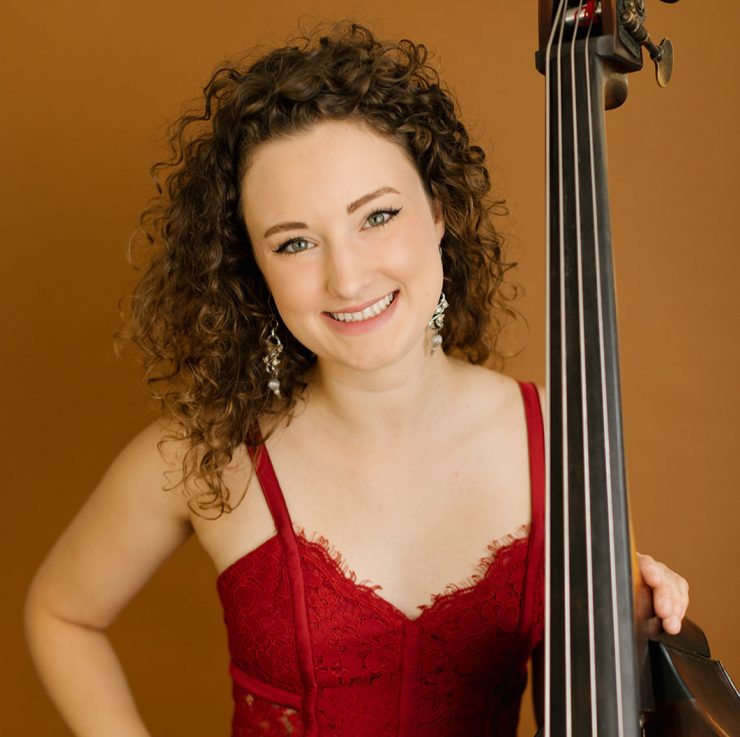 This is one of two articles from the February 2022 issue of Jersey Jazz Magazine being made available to everyone. For complete access to all articles in our award-winning Jersey Jazz magazine, please join the New Jersey Jazz Society by clicking HERE.

Growing up in Des Moines, Iowa, Hannah Marks started off playing guitar. “I didn’t really take to the instrument,” she recalled, “so I picked up the cello in fourth grade. I was shy and wanted to be in the background.” She discovered jazz when the middle school jazz band performed at her elementary school. So, she joined the jazz band in middle school, adding electric bass to her cello playing. During her junior year in high school, she put down her cello “and picked up the double bass, and I’ve been doing that ever since.”

While still in high school, Marks attended a jazz camp at Simpson College in Indianola, Iowa, “and that’s when I really fell in love with the music. My teachers were playing things like Milestones and Kind of Blue, and I thought, ‘Wow! This feels so good.’”

All the teachers at Simpson, she said, were “incredible, but I’ve become very close friends with the guitar teacher, Seth Hedquist. He was one of the teachers who played those Miles Davis albums for me. He made a huge impact on me. Once I left that camp, we started a professional relationship. We’ve been playing together ever since.”

After graduating from high school, Marks attended Indiana University’s Jacobs School of Music, graduating in May 2019. “I was torn between a few Midwestern schools,” she said. “My parents were very adamant about not wanting me to go to a conservatory. They wanted to me to have a full university experience.”

At Indiana, Marks played in a combo led by saxophonist Walter Smith III, who is now Chair of the Woodwinds Department at Berklee College of Music. “He was incredible,” she said “He got me to start writing original music because the combo he directed required you to write for the band.”

When Smith met Marks, he “was struck by how musical her approach to playing was. She had been doing tons of listening homework, and it was really obvious when you’d hear her play. It was also clear that she was someone that had a vision of what she wanted to do professionally and was willing to do everything necessary to make it happen. For most students, that means focusing on practicing, but, in Hannah’s case, it meant diving head first into the business side of things as well. She formed bands and wrote music for those specific groups, created names for the bands, rehearsed and recorded the projects, and booked release tours around the groups that she was putting together. She is someone that isn’t afraid of doing all the hard work to make things happen.”

In 2019, Marks attended the Betty Carter Jazz Ahead program at the Kennedy Center in Washington, DC. The two-week residency identifies outstanding emerging jazz artist-composers in their mid-teens to age 25. While there, she met faculty members such as trumpeter Marcus Printup, vocalist Dee Dee Bridgewater, and pianist Jason Moran, the Kennedy Center’s Artistic Director for Jazz, who directs the program.

“They encouraged me to believe in myself and actually make the move to New York,” the 24-year-old Marks said. “I thought I was moving to Chicago because I didn’t have confidence in myself, thinking, ‘I don’t know if I can make it in New York.’ They said, ‘You need to make that jump. We will support you. We will hire you. We will be there for you.’” So, she moved to New York in August 2019.

Early in 2020, Marks performed in a quartet of young musicians led by Printup as part of a WBGO concert series. The other two members of the group were the keyboardist Miles Lennox and drummer TJ Reddick. DownBeat’s Phillip Lutz, covering the concert, wrote that the young musicians, “demonstrated great maturity as they dispatched a set of guileless originals filled with simple but artful melodies and subtle but swinging propulsion.” Printup told Lutz he used young musicians in part because, “they have something different, something that inspires me to play.”

Recalling Marks’ two weeks at the Betty Carter Jazz Ahead program, Printup told me he was impressed by her “virtuosity, musicality, and high level of seriousness. These uplifting qualities made everyone playing with her ensemble even better. Hannah has a fresh, modern, and original approach to playing the bass.”

Others who have influenced Marks include pianist Geoffrey Keezer and trumpeter Ingrid Jensen whom she met while still in college. “She was the featured artist at an all-female jazz gig in Indiana,” Marks said. “I got to play with her there and at the Banff International Workshop in Canada in 2018. She was someone I reached out to right away when I moved to New York. During the summer I came to her house in Ossining, NY, and we played a couple of front porch concerts that her neighbors would come to.”

She met Keezer through Jensen’s husband, drummer Jon Wikan. “I went to the Zinc Bar to see Jon, and Geoffrey asked, ‘Do you play electric and upright bass? I’m looking for a bass player.’ We got to do two nights at the Jazz Forum (in Tarrytown) with Billy Kilson on drums and Geoffrey’s wife, Gillian Margot on vocals.”

Marks’ jazz hero on bass is the late Charlie Haden. “I’m so sad that I never got to see him play before he passed,” she said. “I have gotten to play with (drummer) Matt Wilson a few times, and he’s someone who played with Charlie.” Other current bassists she admires include Larry Grenadier, Harish Raghavan, Kim Cass, and Chris Tordini. “I consider Harish to be my teacher,” she added.

January and February have been pretty quiet, Marks said, due to Omicron. During the height of the pandemic, “because there were no gigs going on, I needed to put my energy somewhere else. So, I started teaching regularly for the first time. I joined the faculty at the Spence School where I teach bass lessons and rock band. And, I started my own private lesson studio on Zoom.” She also works at the Manhattan School of Music doing performance operations for the jazz department, primarily working with the big bands. And, she is an Artist-in-Residence at the Old Greenwich Presbyterian Church in Stewartsville, NJ, and an Artist-in-Residence/Curator at the Green Lung Studios in Brooklyn.

Since 2019 Marks has been leading a band called Outsider, Outlier. “The earliest iteration played in Montreal on March 7, 2020,” she said. “We were supposed to debut at the Jazz Gallery a couple of weeks later, but that never happened,” because of the pandemic. They did eventually get to play at the Jazz Gallery this past October. Marks describes the band as a “lyric-based project, kind of channeling more of my singer/songwriter side and then mashing that up with jazz. I’m still trying out different band members and haven’t necessarily settled on a band yet. It’s jazz, but I’ve been drawing on other influences like musical theater, punk, noise rock, free jazz. So, there’s a lot of different things at play.”

The new Outsider, Outlier will be five or six pieces. “Vocal, drums, bass — that’s always going to be present. A couple of songs have alto saxophone. Nathan Reising always plays saxophone in my band. I’ve been experimenting back and forth with guitar and piano. Both are essential, but I might not need them on every song.” Marks hopes to make an Outsider, Outlier recording at the end of the summer for release in early spring of 2023. On March 4, the band will perform at the Green Lung Studios. She’s also planning a tour across the East Coast.

Her mentor, Walter Smith III, is very enthusiastic about her future. “In her short time in New York,” he said, “it’s already obvious that she is laying the foundation for a long and successful career in music.” –SANFORD JOSEPHSON