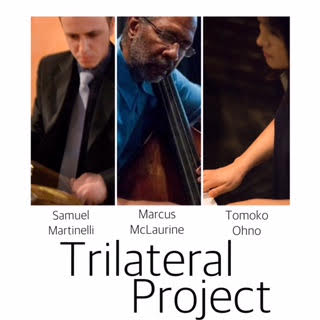 In April 2018, Brazilian drummer Samuel Martinelli self-released an album called Crossing Paths, celebrating the relationship between Brazilian music and jazz. Reviewing the album for AllAboutJazz, Dan Bilawsky pointed out that his quartet was “rich in rhythmic verve. Martinelli provides strong originals, puts his own stamp on a classic or two, adds hearty support, and delivers with grace, while his seasoned colleagues — trumpeter Claudio Roditi, bassist Marcus McLaurine, and pianist Tomoko Ohno — magnify his intentions and find deeper meaning in the notes and tones of the project.” Six of the eight tracks are Martinelli originals, added to Sonny Rollins’ “St. Thomas” and Dizzy Gillespie’s “Birks’ Works”.

In January’s Jersey Jazz, (“Talking Jazz”), McLaurine recalled that Roditi, who died in January 2020, really liked the group on the recording. After Claudio passed,” he said, “we decided, in his honor, to keep it together as The Trilateral Project. Claudio was a sweetheart and a total master. His spirit is always there when we play.”

At 7 p.m. on Saturday, February 26, The Trilateral Project will be performing at the New Jersey Jazz Society’s Virtual Social. “The more we play,” McLaurine added, “the more it really jells into something. We are hoping to get a recording out as our next project. We are now working on material, and we are going to get featured guests on it.”

One of Roditi’s last recording projects was as a guest artist on the Diva Jazz Orchestra’s Diva + The Boys album (mcgjazz: 2019). Ohno is Diva’s pianist and she shared solos with Roditi, clarinetist Ken Peplowski, and trombonist Jay Ashby on Ashby’s “Deference to Diz”. Roditi told Jersey Jazz’s Schaen Fox (January/February 2020) that album was “one of the best projects I’ve ever participated in involving a large ensemble.” As for “Deference to Diz” — “Jay Ashby’s arrangement is so much in the pocket of the bebop era. Every solo is killing.”

Ohno’s best memory of Roditi was, “when we were at a buffet style restaurant somewhere in the Midwest for a gig. He was almost in tears and told me how much he missed his mom’s shrimp. At the same time, we both were peeling tons of shrimp shells from the buffet. And, all of a sudden, somehow, I felt like I could understand why he could write such incredibly beautiful melodies.”

The February 26th Social will be streamed on the njjs.org website as well as on the NJJS Facebook page and YouTube channel. There is no admission charge, but donations are welcome and appreciated.

Funding for the NJJS Socials has been made possible, in part, by Morris Arts through the New Jersey State Council on the Arts/Department of State, a partner agency of the National Endowment for the Arts.