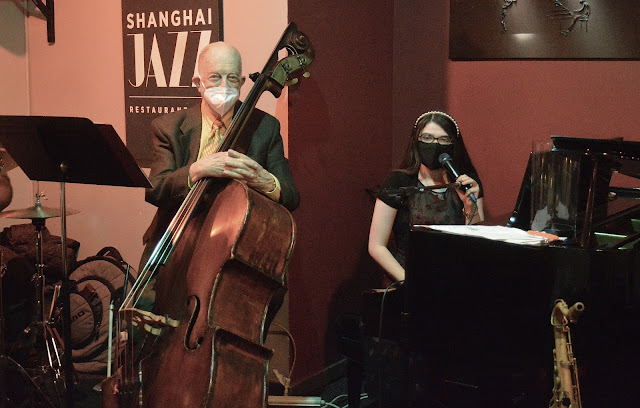 Jerry Weldon’s father was a jazz fan. “So,” said the veteran tenor saxophonist, “I was introduced to Bill Crow through my father’s record collection. A few years later, when I joined Local 802, I became an avid reader of his ‘Band Room’ column, which was featured every month in Allegro, the union trade paper.”

Shanghai Jazz in Madison, NJ, was sold out for Wednesday, December 22, the night bassist Crow was scheduled to play with the Generations of Jazz Trio, led by young pianist Leonieke Scheuble, with her father, Nick, on drums. (“Happy Birthday Bill Crow!, Jersey Jazz, December 2021). The threat of the Covid virus caused several cancellations, including Nick’s, but the early celebration of Crow’s 94th birthday (actually on December 27) went on as planned.

Nick Scheuble watched the proceedings virtually and reported that Weldon,“played almost 75 per cent of the night, beautifully, with soul. John Girvin, who hired Bill many times to play jazz liturgies at Faith Lutheran Church (in New Providence), wrote a beautiful arrangement on the spiritual, ‘I Want Jesus to Walk with Me’ and was there to hear Leonieke and the band play it. Cydney Halpin (NJ Jazz Society President) sang ‘Blue Skies’ beautifully and spoke about Bill’s importance as well.”

The young drummer, Hank Allen Barfield — who often plays with Weldon and alto saxophonist Vincent Herring — filled in for Scheuble, who described his playing as, “swinging”. And, Weldon added that Barfield is “one of my favorite drummers.” The celebration, though, was energized by the brilliant piano playing and leadership qualities of Leonieke, now a Jazz Studies student at William Paterson University (the alma mater of her father as well as Barfield). “Leo’s love and respect for Bill is a beautiful thing to witness!” said Halpin. “She is growing by leaps and bounds as a bandleader!” Weldon described her as “a very gifted and swinging pianist.”

The musical highlight of the evening was the performance of Leonieke’s original composition, “2:52am”, which she played in 6/4 time. “The audience,” said her father, “seemed to react with their strongest applause to it,” adding that Barfield “took a post-bop approach during a wonderfully creative solo. It was an exciting performance.” Added Halpin: “If she hadn’t said it was an original tune, the listeners would have thought it was a tune by somebody famous.”

In last month’s Jersey Jazz preview article about this event, Leonieke said playing with Bill Crow,“is truly a blessing. I grew up hearing some of his most famous recordings. To stop and listen to him playing next to me is something I am still trying to wrap my head around.”

Bill Crow and Leonieke Scheuble in photo above, taken by John Girvin. Barfield, Crow, Scheuble and Weldon perform in video link below.