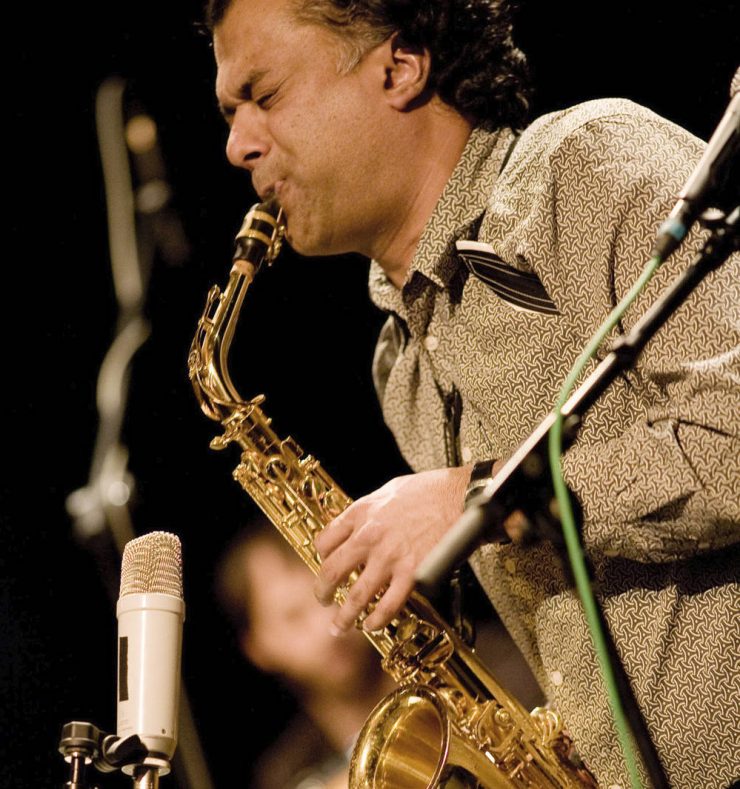 This is one of two articles from the December 2021 issue of Jersey Jazz Magazine being made available to everyone. For complete access to all articles in our award-winning Jersey Jazz magazine, please join the New Jersey Jazz Society by clicking HERE.

In April 2019, Princeton University held its first ever Jazz Festival featuring a broad lineup of jazz professionals playing with the university’s student groups. The professionals included saxophonists Joel Frahm, Tia Fuller, and Donny McCaslin; trumpeter Ingrid Jensen; vocalist Charenee Wade; percussionist Pedrito Martinez; and bassist Dave Holland. There were plans for a second festival in 2020, but, of course, those were canceled by the pandemic.

As Princeton student jazz groups prepare to present concerts on December 1, 2, 4, 6, and 10, Rudresh Mahanthappa, Director of Jazz (pictured here), is confident “we will do it (the festival) again. I am always thinking of ways to provide interesting opportunities for the students and showcase that music as a living and breathing entity.”

Mahanthappa, winner on alto saxophone in the most recent DownBeat International Critics Poll, pointed out that, “We are a music department. We are not a conservatory and are not pretending to be a conservatory. What I am trying to do is provide an enriching experience for people who still want to play. The great thing about the scenario at a place like Princeton is that we have conversations about music beyond the nuts and bolts. For example, I had Archie Shepp here as a guest for a week, and with him, we talked a lot about activism and how music is a form of community organizing and social protest. Those are just conversations that I don’t feel they are having at the big jazz schools. I very much appreciate that.

“I have also brought in Danilo Perez and Claudia Acuna,” he continued. “With them, we did joint activities with the Latin America Studies department. We are looking into doing a large event with Terence Blanchard with the African-American Studies department. We are doing things where we can draw from several pots of knowledge that go well beyond music. The university has been supportive of these types of ideas.”

Mahanthappa’s approach to teaching: “Regardless of what we are working on, we always play some Monk and some Bird. Whatever we are playing is still coming from them. Even when working on original tunes, I want the students to know how the music is still coming from bebop. I like the students to be aware of that history. Anything we are doing conceptually that we see as fresh and new, there is always a shade of that music that has already happened. The idea of innovation is a goal that keeps us thinking and moving, but at the same time, basically, anything that we play was already played. So, we can see ourselves as part of that continuum, which is an empowering place because we are within this amazing lineage and tradition. “

During his time as Princeton’s Jazz Director, Mahanthappa has assembled a strong staff that includes bassist Matthew Parrish, vocalist Trineice Robinson-Martin, and composer/bandleader Darcy James Argue, among others. “I try to hire interesting faculty and people I feel are doing exciting things in this music,” he explained. “We have also commissioned works from people like Billy Childs and others. We try to commission a new piece once a year. This helps us to think about this music as not a museum piece; it’s something that’s alive. People are still creating new works that are relevant and part of the tradition but speaking about what’s happening in 2021.”

Over the last several years, Mahanthappa has released several acclaimed albums as a leader. In his most recent recording, Hero Trio (Whirlwind: 2020) with bassist Francois Moutin and drummer Rudy Royston, he displays his creative use of small group arrangements, varied repertoire, and genre shifts. In addition to leading his own groups, he has worked with drummer Jack DeJohnette, and the previously mentioned pianist Danilo Perez as well as Vijay Iyer, among others.

Parrish, who spent nearly 10 years with tenor saxophonist Houston Person, also played with the legendary swing trombonist Al Grey as well as current artists such as vibraphonist Stefon Harris, violinist Regina Carter, and saxophonist Greg Osby. Of all the musicians he worked with and met, Grey may have had the most impact and influence. “He was a huge part of my development,” Parrish said. “His ability to play three notes in a solo and have people falling out of their chairs was always remarkable to me.”

This year at Princeton, Parrish has two ensembles including, “students who are new to jazz and some at an intermediate level. With a little bit of work, these students could move into a higher-level ensemble and maybe take on a more exploratory version of jazz, which is what Rudresh aspires for his students.”

As for his philosophy as teacher, “I carry over what I learned from my teachers, like Kenny Barron, Larry Ridley, and William Fielder (a well-known trumpet teacher). They used traditional methods, but they also had real-world practical experiences and a method of teaching in which they would help you teach yourself. They gave me the tools to take apart a tune and figure it out for myself. They gave me the necessary skills to create my own harmony, theory, and a way to make my sound uniquely mine. I bring that with me in my teaching, where I blend two philosophies. I do have a certain expectation in which my students have to display a certain level of technical ability. Still, I also try to encourage them to push themselves in a direction that suits their personality and their goals. I know that most of my students have other goals and are actively pursuing other careers. We have some people focusing on music, but most of my students range from literal rocket scientists to some of the most wonderful English majors I have ever met. It is really a broad spectrum of high-level students.”

Parrish is excited to showcase his Princeton ensembles. “We have an ambitious set of music this time. It may be more difficult than the music that we normally present, but that was my enthusiasm for being able to perform since the Covid shutdown. We are working hard, and I do keep in mind who is listening and try to make it entertaining.” He is currently finishing up his own album and albums with Person and vocalist/bandleader Michelle Lordi. — JAY SWEET

The five student December concerts are:

Dr. Robinson-Martin specializes in vocal pedagogy and performance practices for contemporary music styles (jazz, pop, gospel, R&B, country, rock, music theater). As the creator of Soul Ingredients®, a methodology for nurturing vocal freedom and authentic musical interpretation and expression, she regularly travels nationally and internationally teaching voice, lecturing and giving workshops. She also performs internationally and recently released All Or Nothing, her highly acclaimed debut album as a leader.