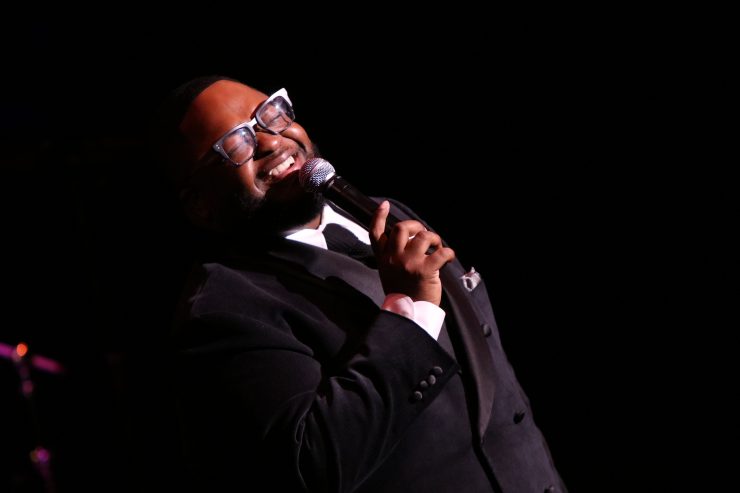 This is one of two articles from the December 2021 issue of Jersey Jazz Magazine being made available to everyone. For complete access to all articles in our award-winning Jersey Jazz magazine, please join the New Jersey Jazz Society by clicking HERE.

When G. Thomas Allen was a freshman vocal performance major at Baltimore’s Morgan State University, he initially concentrated on classical music, “because of my range. I’m classified as a countertenor (a type of classical male singing voice whose vocal range is equivalent to that of the female contralto or mezzo-soprano voices). I was really more connected to jazz though,” he continued, “and, my teacher said, ‘Find a tune you can do.’”

That tune was Erroll Garner’s “Misty” (lyrics by Johnny Burke). The version that attracted Allen was Sarah Vaughan’s rendition from a live concert in Sweden in 1964. “I saw a YouTube clip of it,” Allen said, “and, I sort of used that and modeled my jazz phrasing from it. I was sort of learning the language.”

On Sunday, November 14, at the New Jersey Performing Arts Center in Newark, Allen sang “Misty” as his closing tune in the finals of the 10th Annual Sarah Vaughan International Vocal Competition (Sassy Awards), part of the TD James Moody Jazz Festival. The judges selected him as the competition’s first male winner. “It was a very rewarding experience,” he said. “I was amongst lovely ladies, beautiful singers, and they were killing it. It’s humbling.”

One of the judges, guitarist/vocalist John Pizzarelli, described the competition to Jersey Jazz as “a great mix of vocalists, and that made it hard to come up with a winner. I think G. really commanded it, and his confidence was as clear as his voice.”

In addition to Vaughan, Allen’s greatest influences have been Bobby McFerrin and Philip Bailey of Earth, Wind & Fire because of their “vocal flexibility, singing in treble clef as a male, sort of using the full range. Sarah Vaughan was a contralto, but there were moments when we heard her sing soprano. She used technique to do it. She could get up there and make it beautiful.”

The opening selection in Allen’s NJPAC performance was “Good Morning Heartache” (Irene Higginbotham, Ervin Drake, Dan Fisher). “I know that’s Billie Holiday,” he said, “but I brought my Sarah Vaughan way of doing it, more in a blues style. Then, I had to bring a swing element, so I did Cole Porter’s ‘Just One of Those Things’, and I did a small quote from ‘All God’s Chillun’, and I sort of merged the two tunes.”

The 37-year-old Allen, who lives in Chicago, is known for his cross-genre experimentation. He has two degrees from Morgan State — vocal performance and speech communication and currently is a Contemporary Voice Instructor at the Chicago High School for the Arts (ChiArts) and an Adjunct Voice Instructor at Chicago’s Columbia College.

“There’s some gospel stylizing in my approach to jazz,” Allen said. “That’s where my culture stands out the most. In the Black church, there’s a strong idea of syncopation, call and response, very impromptu improvisation. It was just a part of my upbringing.”

He grew up in Danville, VA, and credits his Grove Park Elementary School music teacher, Debbie Amos (now Flint) with encouraging him to pursue a musical career. “She was my teacher all the way up to high school. She inspired me to figure out that there was a possibility of being a singer. I see now how important it was to have that type of support — as an educator, when you see that student that really stands out you have to sort of put your arms around them and see how you can help cultivate their experience. She sent me a beautiful message about this competition.”

In 2020, Allen released a self-titled digital album that reached Number 1 on the iTunes jazz charts. It was produced by Chicago-based pianist Dennis Luxion, a fellow member of the Columbia College music faculty and one-time pianist for Chet Baker. There are guest appearances by trumpeter Marquis Hill and saxophonist Sheryl Cassity, also a Columbia faculty member.

“I knew I would have challenges touring because of the pandemic,” Allen said, “and that people were home listening to new music. I was very fortunate to have a veteran like Dennis Luxion to bounce things off. And, Marquis Hill brought the idea of bebop and hip-hop crossing. For me, that is post-bop. It helped me to start closing the gap between generations. We just went into the studio and had fun.”

After winning the Sarah Vaughan competition, Allen said he has to “sort of step back, rethink, and retool what my focus is in terms of what’s the next step. I hope to get on the road and start touring and bringing my music to the forefront.”

In 2012, Allen had the opportunity to sing with the late educator, David Baker, and the Smithsonian Jazz Masterworks Orchestra, performing Duke Ellington’s Sacred Concerts at Strathmore Hall in Bethesda, MD. “A singer dropped out,” he recalled, “and David Baker asked me, ‘Can you sight read?’ I said, ‘Yeah’. He played a minor chord, and then said, ‘Let’s see what you can do.’” He considers that experience “a defining moment in my career.”

As a Morgan State freshman at in 2002, he was chosen to go to Paris with Wynton Marsalis’ band as one of the singers doing background work for All Rise, a Sony Classical Records album that featured the Los Angeles Philharmonic, the Jazz at Lincoln Center Orchestra, and a 100-voice choir performing a range of music including jazz, blues, classical, and world music. It was an eye-opening experience for Allen. “I was a young country boy from Baltimore,” he recalled, “and I had never traveled abroad. That was my first tour.”

Allen encourages his students to get some real experience via the jam scene, which is fairly active in Chicago. Although schedules are still in flux as we move out of the pandemic, two clubs that have traditionally offered late night jams are The Green Mill and Andy’s. “Green Mill used to do one at 4 in the morning,” Allen said, “and Andy’s would do one that went to 2 o’clock. If someone like Wynton Marsalis or Cyrus Chestnut was in town, those were the places they would hang.”

He feels strongly that his students should learn about jazz’s lineage and the mixing of different styles. “How do you get young people interested in jazz?” he asks. “It’s merely by connecting the dots, helping them understand that before hip-hop, before R&B, there was jazz, and there was blues, and there was gospel. When they understand that, they have a deep and different appreciation. When I talk to them about the bebop era, I tell them, ‘This wasn’t even popular when it started. We were coming out of the swing era where folks were dancing. With bebop, it became virtuoso, where people had to sit and listen and not necessarily dance.

“Then, I tell them about Aretha Franklin, who was forced to start in jazz, and when she grew, she found a way to merge her gospel background; and now, she’s known as the Queen of Soul.” — SANFORD JOSEPHSON