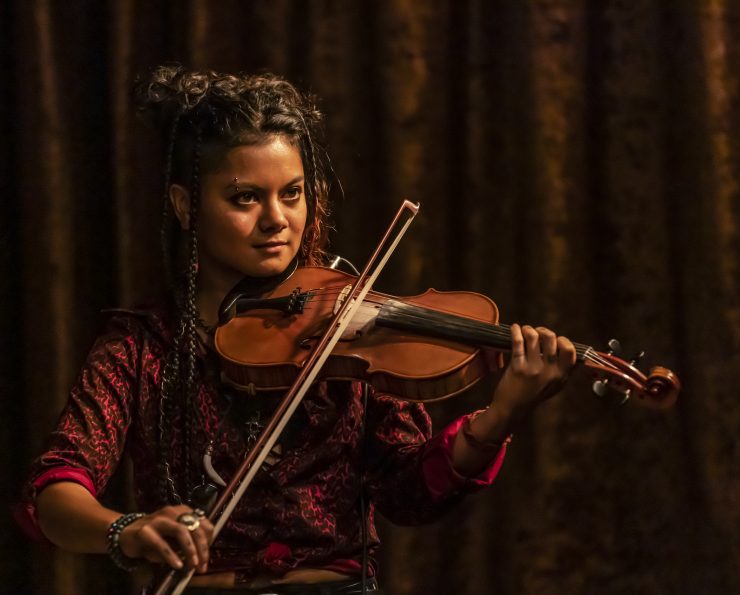 This is one of two articles from the November 2021 issue of Jersey Jazz Magazine being made available to everyone. For complete access to all articles in our award-winning Jersey Jazz magazine, please join the New Jersey Jazz Society by clicking HERE.

Jazz guitarist Stephane Wrembel first saw violinist Daisy Castro play nine years ago when she was 15. “Her tone,” he said, “was already powerful. Her rhythmical placement, her intonation were already unreal. And, most importantly, her soul pours out music and shows amazing creativity, poetry, imagination, dreams.”

I saw Castro for the first time in May 2019 at a concert during Wrembel’s three-day Django a Go Go festival in Maplewood, and I used one word, “electrifying”, to describe her performance (Jersey Jazz, June 2019). She appeared twice that night — first playing with the opening act, Des Sourcils, on “Swing St. Lawrence”, a tune dedicated to Canada’s St. Lawrence River. Then, later Wrembel brought her back for the concert’s final number, “Gypsy Swing” (composer unknown). She brought the audience at The Woodland to its feet with an enthusiastic standing ovation.

From November 4-7, Castro will be playing with Wrembel’s “Django New Orleans” show at Dizzy’s Club in New York’s Jazz at Lincoln Center. The twice nightly performances will pay tribute to Wrembel’s inspiration, the legendary composer/guitarist Django Reinhardt. Other artists in the band include trumpeter/vocalist Bria Skonberg, sousaphonist Joe Correia, drummer Scott Kettner washboardist David Langlois, clarinetist/soprano saxophonist Nick Driscoll, and guitarist Josh Kaye. Castro is looking forward to these performances, but confesses, “I actually have no idea what we will be playing. Stephane will send us the material, and we’ll all get together and kind of wing it.”

The 24-year-old Castro grew up in the Baltimore area and began playing violin at the age of six. Her parents are musicians — “My mom, Anne, is a vocalist and plays some instruments,” she said. “My dad, Joe, plays guitar and percussion. They exposed me to a lot of instruments, which were always lying around the house.” She discovered the “Django stuff” early but didn’t start playing it until she was 12 or 13.

In 2013, Castro did a residency at the Strathmore Institute for Artistic and Professional Development in North Bethesda, MD. The program, which supports young artists as they transition to professional careers, only accepts six applicants a year. “I thought it was very cool,” she said. Alan Duckworth, a writer for DC area-based publication, Rogers Revue, attended Castro’s final concert at the Strathmore Mansion, concluding her residency. He described her as “a gypsy jazz violinist extraordinaire who has already garnered respect from some of the finest musicians locally and abroad. Last night at the Strathmore Mansion, Daisy revitalized the lost art of gypsy jazz with help from the band, Swing Guitars DC . . . This was a great concert! Daisy Castro should be a name you will recognize in the future.”

In addition to Reinhardt and violinist Stephane Grappelli, Castro’s jazz influences have included Chet Baker, Billie Holiday, and Miles Davis, but she has moved on from that style of music, she said. “More recently,” she pointed out, “I would add Jimi Hendrix to that list. I like the fact that his music is all over the place and gritty. Being in Stephane’s band allows me to experiment with that kind of sound.”

Currently, she’s working on two albums with gypsy jazz guitarist/composer/arranger Max O’Rourke. One album, she explained, “is going to be a lot of cover songs from Elliot Smith and Nirvana in our style. There will also be an album of originals by both of us.” Target date for both albums is early next year. Elliot Smith was a singer/songwriter and multi-instrumentalist who died at age 34 in 2003 after struggles with alcohol and drugs. He was best known for his song, “Miss Misery”, which was on the soundtrack of the movie, Good Will Hunting, and was nominated for an Oscar for Best Original Song in 1998. Nirvana was the popular alternative rock band founded by guitarist Kurt Cobain and bassist Krist Novoselic.

Although she still lives in Maryland, Castro spends a lot of time in New York. “I don’t officially live here, but I’m here a lot,” she said, “because most of my work is up here.” She plays every other week at Terra Blues in Greenwich Village with a band called Hazmat Modine. “Hazmat,” she explained, “is an eight-piece brass band. I wouldn’t describe it as jazz. I would call it more world music than anything else.” When Hazmat Modine performed in Europe in 2017 (pre-Castro), the jazzineurope.mfmmedia website described it as, “weird Americana-world-music and post-modern blues fusion.” According to the Terra Blues website, “Hazmat Modine runs the gamut of genres and instrumentation. Most of what they play are originals, but keep an ear out for cover versions of Slim Gaillard, Jimmy Rogers, Jaybird Coleman, and Irving Berlin.”

Castro’s earlier albums on the CD Baby label — Gypsy Moth in 2010 and Deviations in 2013 — are a mixture of popular standards, original compositions and bluegrass and western swing. Gypsy Moth, for example, includes the Gershwins’ “Summertime” and Hoagy Carmichael’s “Stardust”, along with two tunes written by the Castro family — the title tune and another called “Graveyard Waltz”. The title tune on Deviation and another selection, “Quatre Epides”, are Daisy Castro originals, but the album also includes Reinhardt’s “Blues en Mideur”, Juan Tizol’s “Caravan”, and Charlie Parker’s “Donna Lee”.

Wrembel feels his personality and style and Castro’s “blend beautifully, which allows us to play in zones that are extremely comfortable and original. She is one of my favorite violin players in the world.” –SANFORD JOSEPHSON