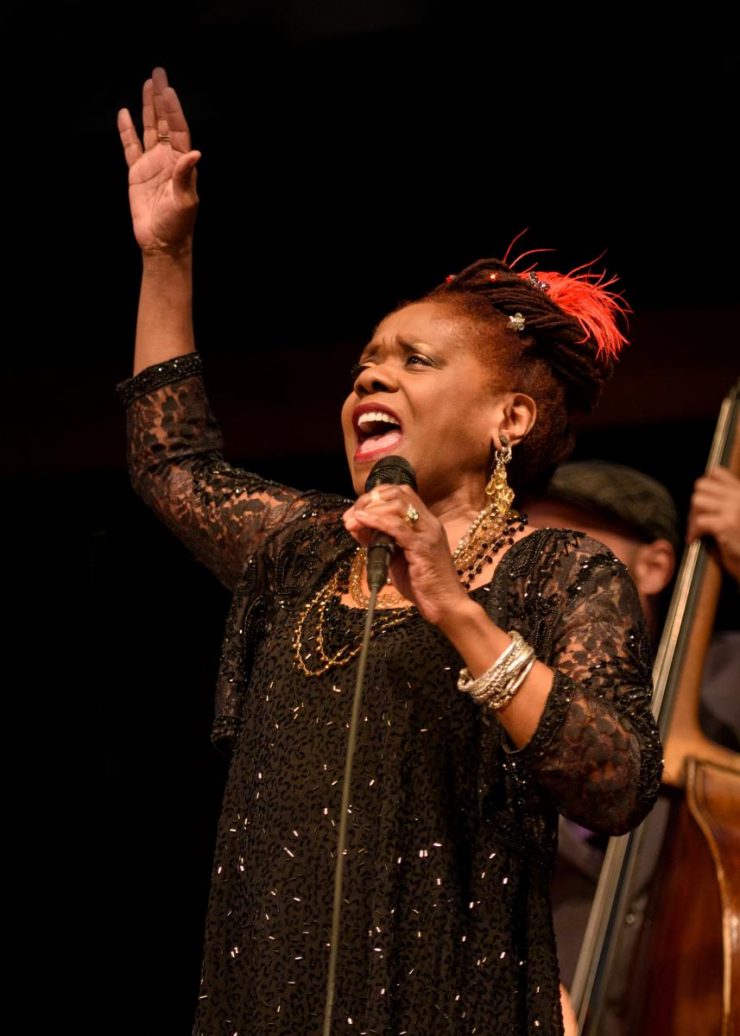 No matter where Catherine Russell performs — singing outdoors on a temporary park stage, in the august Rose Hall of Jazz at Lincoln Center, or at any jazz club around the globe — she casts a spell. Shanghai Jazz in Madison, NJ, however, seems made for her magical voice. There her sound is not only riveting; it takes on the added quality of a warm comforting embrace.

Her appearance there on December 5 was advertised by the owner, Tom Donohoe, as a special event with a special menu. The first and second sets were far enough apart to allow patrons to leisurely dine and chat before the show; and the veteran staff made sure all was ready when the crowds arrived. Then, the proprietor thanked the audience for supporting live jazz during this trying time and introduced Matt Munisteri (guitar), Tal Ronen (bass) and Mark Shane (piano), and then the star.

Echoing Donohoe’s remarks, Russell noted that performing remotely was not something she wanted to continue doing, if only because it lacks applause. Then the four artists began. The trio has been with her for years and superbly provides great backup and interesting solos. When Russell quietly called “Nat King Cole’s Blues,” the musicians immediately hit “Send for Me,” and Munisteri added a solo that was long, great, and pure blues.

Russell is one of those performers who can make you feel that you are good friends visiting her home. She expertly balances her performances with an occasional brief talk or an intro limited to who first performed a tune or wrote a piece, then she sings the song. In all, 15 numbers, ranging from seasonal classics such as “Merry Christmas Baby,” to great standards such as “You Stepped Out of a Dream,” fan favorites such as “Fine and Mellow,” and seldom heard works, such as “I’m an Errand Girl for Rhythm,” packed the set. It ended far too soon, but the clock showed that we weren’t sold short.

As always, Donohoe closed the event with a final acknowledgement of each performer, then he asked the star if she would return again. She quickly agreed, to sustained applause. Russell lingered to chat with fans and signed some CDs as the happy crowd thinned out. As we drove home, we listened to her on our new CD. –SCHAEN FOX