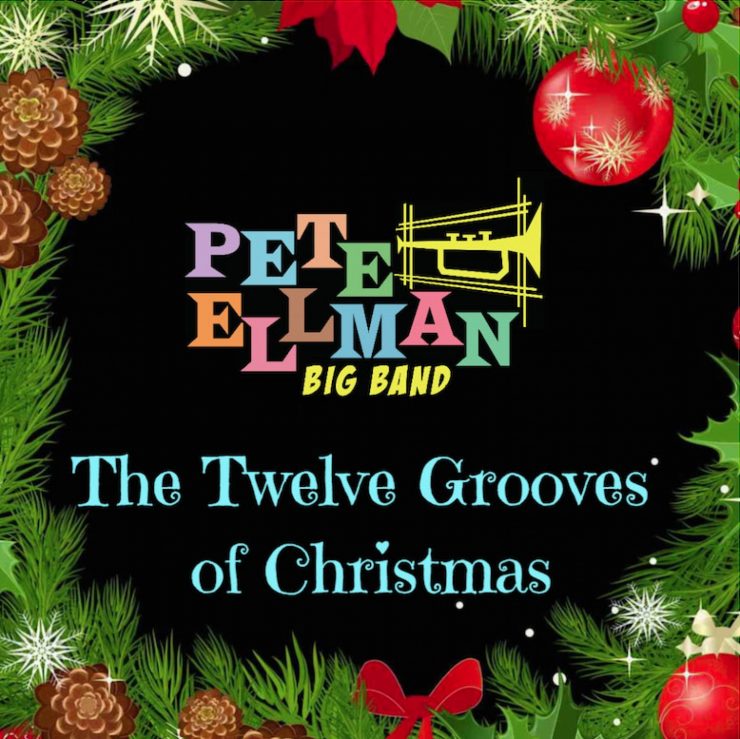 Each year there continue to be many new releases of Holiday albums. Here are a few that you might want to consider adding to your playlist.

If you like a truly hip approach to Christmas music, then The Twelve Grooves of Christmas (One Too Tree -2101) by the Pete Ellman Big Band is a must have. The band features a superb collection of Chicago area musicians playing arrangements that are sure to set your toes tapping. They have cleverly adapted several songs by adding new titles. “Mister Santa” is based on “Mister Sandman,” with a nice vocal by Katie Ernst, who also is present on “Mack the Halls” and “What Are You Doing New Year’s Eve.” “O Little Town,” “Mack the Halls,” “O’Schwingenbaum” and “The Twelve Grooves of Christmas” have titles that give away their sources. Kurt Elling is the vocalist on “It’s the Most Wonderful Time of Year.” You have probably never heard “Silent Night” as a swing tune, but it works. The climactic number, “The Twelve Grooves of Christmas,” is a tour de force that serves as a fitting conclusion to a special album. (PEBB.net)

Season’s Swingin’ Greetings (Cellar Music – 112521) Benny Benack III with the Steven Feifke Big Band is actually a seasonal celebration devoted to songs related to both Christmas and Chanukah. The Christmas songs include “I’ll Be Home for Christmas” and “The Christmas Song,” plus four original tunes that Benack had a hand in writing. The nod towards Chanukah is present in “The Dreidel Song,” with new lyrics by Benack, and “Ma’oz Tzur.” Also included are a couple of seasonal songs, “What Are You Doing New Year’s Eve” and “Sleigh Ride.” Benack provides the vocals, along with his trumpet artistry. The band is superb playing charts mostly by Feifke, but with a few also having input from Benack. Overall, these are indeed swingin’ Season’s Greetings sure to put you in a holiday mood. (www.cellarmusicgroup.com)

Guitarist Pete Smyser opens his Christmas Album (self-produced) with “The Christmas Waltz” featuring the wonderful tenor sax of Larry McKenna, who also is present on “What Are You Doing New Year’s Eve.” The other players are Madison Rast on bass and Dan Monaghan on drums with Ted Lis adding his tenor sax on “Count Your Blessings (Instead of Sheep),” “Winter Wonderland” and a terrific duo with Smyser on “White Christmas.” The 13-song program gives Smyser plenty of opportunity to show what a truly special jazz guitarist he is. His approach is straight-ahead with a consistent swing underlying all of what he plays. This is a perfect addition to your musical Christmas library. (smyser.com)

Merry & Bright (Capri – 74167) by the Jeff Hamilton Trio, immediately went into my CD player. Having heard the trio on recordings and in person, great sounds were expected, and great sounds are what I heard. Hamilton on drums, Tamir Hendelman on piano, and Jon Hamar on bass form as fine a trio as you could want. They play like three bodies with one head. Their 10-song program includes a nice variety of seasonal tunes, including “It’s the Holiday Season,” “Caroling, Caroling,” “Bright, Bright the Holly Berries,” “Here Comes Santa Claus” and “Have Yourself a Merry Little Christmas.” Hamilton and friends make “The Little Drummer Boy” sound like no other version and is easily the best one so far. (www.caprirecords.com)

Ginny Carr Goldberg, Robert McBride, Holly Shockey and Lane Stowe comprise the Uptown Vocal Jazz Quartet, a group from the Washington, DC area that creates interesting harmonies which consistently engage the listener. For Fools for Yule (HouseKat Records – 005) the quartet combines traditional seasonal selections such as “Christmas Time Is Here,” “Winter Wonderland,” “The Christmas Song” and “Silent Night” with “I’ve Got My Love to Keep Me Warm.” Add four originals by Goldberg, one original by Shockey, and provide an interesting take on Samuel Barber’s “St. Ita’s Vision,” arranged by McBride, to create an eclectic and creative program that provides a unique musical experience for the season. They avoid gimmickry in favor of making their jazzy approach seem right at home for a welcome Christmas listening experience. (www.uptownvocaljazz.com)

Dallas-based vocalist Carolyn Lee Jones has produced a winner with Christmas Time Is Here (Catn’round Sound), a 12-song collection that avoids being a lot of the same old, same old. Yes, there are “The Christmas Song,” “Christmas Time Is Here,” “Santa Baby” and “White Christmas;” then there are several that familiar but not overdone tunes such as “I’d Like You for Christmas,” “Merry Christmas Baby” and “Toyland;” a few rarely recorded selections including “Warm in December” and “Jingles, the Christmas Cat;” songs that fit the season but are not considered Christmas songs, “You’d Be So Nice to Come Home To” and “Count Your Blessings (Instead of Sheep);” and a new bit of whimsey, “Red Christmas.”   Jones has a warm voice and is a stylish vocalist with a natural jazz feel to her singing. The arrangements by Brad Williams and David Pierce are nicely executed by a variety of musicians in combinations ranging from a quartet to a nonet that includes a three-piece string section. All in all, this is a wonderfully satisfying outing. (www.carolynleejones.com)

Singer Jan Daley’s voice is one that draws you in immediately. Home for Christmas (LOG Records – 2468) finds Daley addressing 13 selections with supportive arrangements by Mischa Segal and Craig Garfinkle. She has chosen an interesting variety of songs — pop Christmas classics like “I’ll Be Home for Christmas,” “The Christmas Song,” “Have Yourself a Merry Little Christmas,” “Grown Up Christmas List,” “Winter Wonderland” and “White Christmas; a few carols, “O Holy Night,” “The First Noel” and “Silent Night, and a couple of her own well-conceived tunes, “Can’t Give You Any Answers” and “Nothing Like Christmas” which she performs in medley with “The Christmas Waltz.” She had a particular affection for Barbra Streisand’s “The Best Gift,” as she explains in her liner notes. Home for Christmas provides a comfortable collection of songs for the season. (www.jandaley.com)

In 1961, vocalist June Christy released an album of 12 original seasonal songs by Arnold Miller and Connie Pearce titled This Time of Year. The album has been underrated since its release, with only one of the selections, “The Merriest,” receiving much attention outside of the album. On 7 Shades of Snow (Arabesque Recordings – 6972), another June, June Bisantz, gives her take on six of the tunes from the Christy album, “The Merriest,” “Ring a Merry Bell,” “Hang Them on the Tree,” “Seven Shades of Snow,” “Sorry to See You Go”, and “Winter’s Got Spring Up Its Sleeve.” The songs hold up well, and Bisantz does a fine job of presenting them, backed by a terrific sextet led by bassist Jon Burr that also includes Mark Pfaneuf on sax, Brandon Lee on trumpet, Mike Eckroth on piano, James Chirillo on guitar, and Alvester Garnett on drums. Due to the pandemic, Bisantz and the musicians recorded their parts in their own home studios, and Norman Johnson did a masterful job of mixing and mastering the album. Bisantz’s decision to resurrect this material was a wise choice, well done. (junebisantz.com)

While only a four-song EP, there is a lot of quality to be found on A Jazzy Interlude with Josie Falbo (JF Records). Vocalist Josie Falbo is backed by a trio on “The Christmas Waltz” and “A Child Is Born,” with a trumpet added on the latter, while larger ensembles support her on “The Christmas Song” and “Christmas Eve Is Coming Soon.” Throughout, Falbo lets her jazz foundation shine through, giving validity to the title of the EP. (www.josiefalbo.net) –JOE LANG