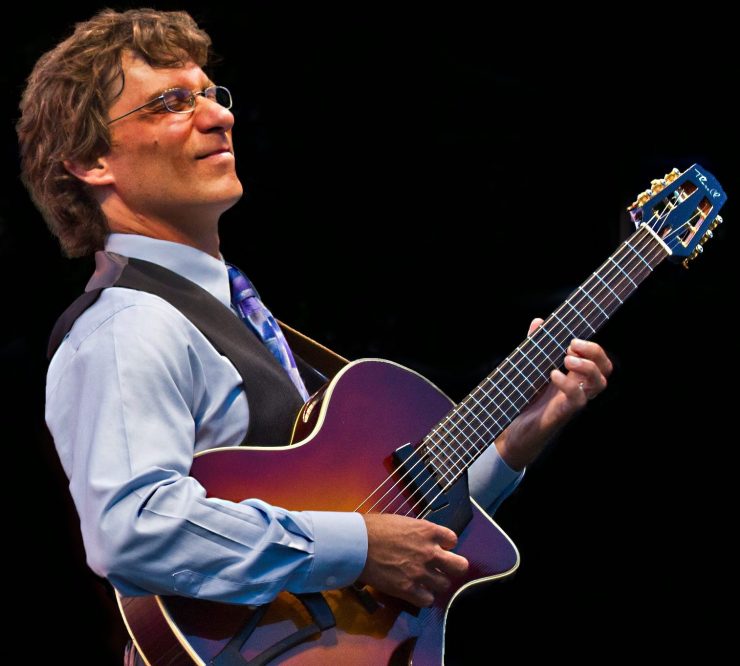 Guitarist Frank Vignola has taken up residency on Wednesday nights at New York’s Birdland Theater. On most Wednesdays at 8:30 p.m., his quartet — with fellow guitarist Jimmy Bruno, drummer Vince Cherico, and bassist Peter Washington — will perform tunes from their typical repertoire and then welcome special guests. Here’s the schedule through the end of the year:

This past January, Vignola and Raniolo teamed up, from Vignola’s home in Warwick, NY, to present the NJ Jazz Society’s Virtual Social. They honored New Jersey guitar greats such as Bucky Pizzarelli, Lou Pallo, Tony Mottola, Al Caiola, and Les Paul, playing a tune or two for each of them. It was a special hour. They also appeared together, along with bassist Gary Mazzaroppi at the Morristown Jazz & Blues Festival on September 18.

Acker, a Vignola protégé, is, according to allaboutjazz, “a gypsy jazz guitarist in the style of Django Reinhardt and with abilities far beyond his years.” In addition to playing with Vignola, he has performed with the late Bucky Pizzarelli, Julian Lage, and Stephane Wrembel, among many others.. He was the winner of the 2017 Djangofest North West Saga Award and is a four- time winner of the DownBeat Magazine Student Award for jazz guitar solos

The late guitar legend Les Paul, once named Vignola to his “Five Most Admired Guitar List” during an interview with the Wall Street Journal. When Vignola was interviewed by Jazz Guitar Today in February 2018, Editor Bob Bakert asked him about his relationship with Paul. “Oh my God, Les was the best!” he responded. “I met him when I was 19 in the year 1985 when he first came out of retirement. He was playing a tiny little club in downtown NYC called Fat Tuesdays. He was very gracious, treated me to dinner, and we had a great conversation. He then invited me up to sit in and sat me behind the trio who were all on stools. So, no one could see me.

“Once he heard I could play a bit, he invited me up to a stool and invited Vic Juris up and left the stage. So, Vic and I battled it out and the place went crazy. About 4 a.m. after I returned home, the phone rings and it’s Les. We spoke for hours about picks, strings and guitars. We were dear friends ever since then.”

For information about tickets, log onto birdlandjazz.com or call (212) 581-3080. Birdland requires proof of vaccination for all staff, artists and patrons. In accordance with the most recent NYC Covid-19 guidelines, proof of vaccination at the door is required in the form of a CDC card, Excelsior passport or a picture of the CDC card with a valid ID.