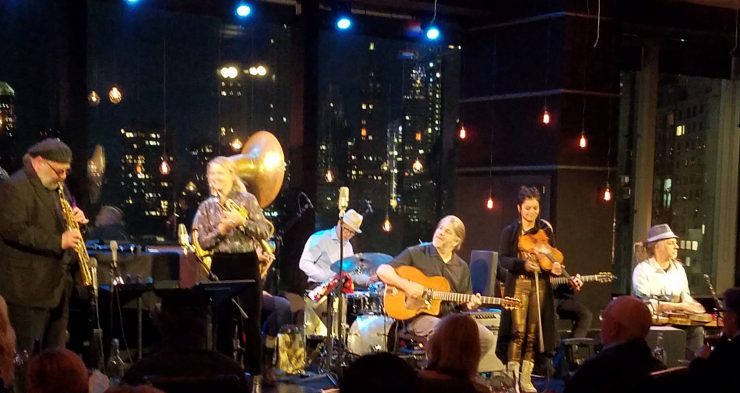 During the early show at Dizzy’s Club on Sunday, November 7, guitarist/composer Stephane Wrembel told the audience that he might be looking at his cellphone during the set. “I’m not checking my messages,” he said. “I’m looking at the set list.” He added that he usually doesn’t have a fixed set list, but it was important for this performance — a musical history of the merging of New Orleans and European music in the 1920s and ’30s. That was the essence of “Django New Orleans”, four nights, two sets, from November 4-7.

Wrembel pointed out that legendary guitarist Django Reinhardt began playing at dances in 1920 when he was 10 years old — “From eight at night until eight in the morning, all those waltzes.” But the music began to change when New Orleans musicians such as the Original Dixieland Jazz Band, Louis Armstrong, and Sidney Bechet began traveling to Europe.

The mood then shifted entirely to France, concluding with two Wrembel favorites: “Bistro Fada”, his theme from Midnight in Paris, and Reinhardt and Stephane Grappelli’s “Minor Swing”. The crowd was wildly enthusiastic — both for the appreciation of the band’s music and the realization that live music is, indeed, back after the long drought. — SANFORD JOSEPHSON

George Wein: ‘Hooked’ by the Records of Armstrong and Lunceford