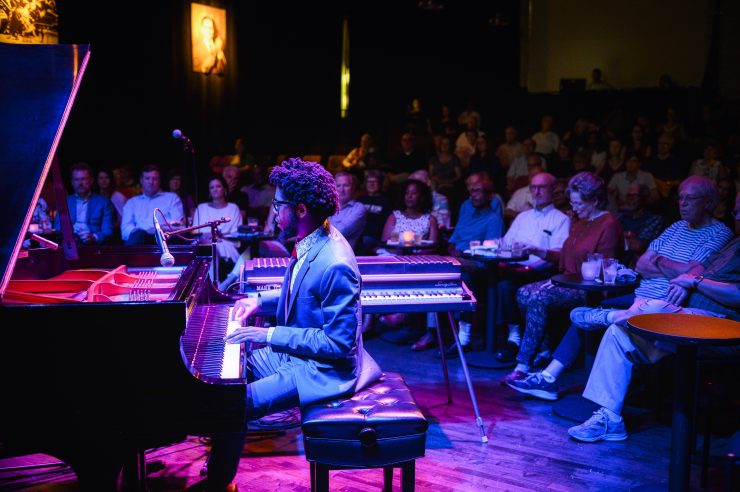 This is one of two articles from the October 2021 issue of Jersey Jazz Magazine being made available to everyone. For complete access to all articles in our award-winning Jersey Jazz magazine, please join the New Jersey Jazz Society by clicking HERE.

Sean Mason got a late start on piano. He began playing at age 13 after first trying trombone and percussion. As a result, he said, “I didn’t apply to any music schools for college. I just decided to go about 1 ½ hours from where I lived (in Charlotte, NC) to the University of North Carolina at Greensboro.”

UNCG does, however, offer degrees in Music Education and Music Performance along with a Post-Baccalaureate Certificate in Jazz. While studying there in 2017, Mason learned that Branford Marsalis — who lives in Durham, NC, and teaches at North Carolina Central University – was giving lessons at UNCG to saxophone students. He asked Steve Haines, a UNCG music professor who teaches Jazz Listening and Jazz Pedagogy, if he could get a few minutes with Marsalis at the end to play piano, and Haines told him Marsalis could carve out 15 minutes.

Remembering his encounter with Mason in a January 2020 interview with the Charlotte Observer’s Lawrence Toppman, Marsalis said, “I had 15 saxophone players and Sean. I gave him ‘King Porter Stomp’ to transcribe. I must have given that to 15 students (over the years), and none ever learned it . . . I gave him Edvard Grieg’s ‘Lyric Pieces’, and he came back and played two of those basically from memory. I said, ‘You might want to consider Juilliard. Go to their website, put in your audition tape, and they will call you.’ I told my brother (Wynton, Director of Juilliard Jazz), ‘Be on the lookout for this kid.”

Recalled Mason: “I played ‘Sunny Side of the Street’,” and he asked for my email. He sent me some music to transcribe – ‘King Porter Stomp’ and a couple of classical pieces. I was hungry. I memorized everything. That impressed him, we developed a long-term relationship, and he encouraged me to go to Juilliard.”

Haines recognized Mason as “a very special musician. I mean, he just had huge ears. Students would be assigned writing out four and five horn arrangements from Benny Carter and Duke Ellington, and he’d just be leagues ahead.”

Mason attended Juilliard but left during the pandemic and formed his own trio with bassist Butler Knowles and drummer Malcolm Charles. He also performs frequently as a sideman. “I like being a sideman, learning other people’s music,” he said. On August 19, he subbed for Emmet Cohen in drummer Herlin Riley’s quintet on the first night Dizzy’s Club reopened after the pandemic.

Through his connection with Marsalis, who wrote the soundtrack for the Netflix movie, Ma Rainey’s Black Bottom (see Jersey Jazz, February 2021), Mason played piano on the soundtrack. “We finished Ma Rainey during the pandemic,” he said. “It was a pretty long process. We had to make sure we stayed safe. It was difficult. This was music from 100 years ago. The language was constricted to the 1920s. It was as if bebop never happened. We did all the recording in New Orleans.”

In January 2020, Mason was part of trombonist Mariel Bildsten’s septet that played the music of Count Basie and Duke Ellington at the Morris Museum’s Bickford Theatre. As reported in the March/April 2020 issue of Jersey Jazz, one of the highlights of that concert was “A showstopping rhythm section-only performance of Ellington’s ‘I Got It Bad and That Ain’t Good’, followed by his ‘Dancers in Love’ that displayed Mason’s Tatum-esque style, morphing into a Fats Waller-like stride, to the audience’s delight.” Prior to that concert Mason had performed with Wynton Marsalis’ Young Stars Ensemble and appeared with Marsalis’ quintet in November 2019 at Minton’s Playhouse in Harlem.

Mason’s connection with Bildsten dates to early 2019 when he was part of her band playing the late night slot at Dizzy’s. That week-long gig resulted in Bildsten’s 2020 Outside In album, Backbone, which, as Bildsten described in last month’s Jersey Jazz, was developed during rehearsals for that engagement and recorded the day after the gig ended. Recalling that during that week, “We really wanted to get comfortable with the music,” Mason added that the resulting album, “shows how good a bandleader Mariel is.”

Last month, Mason appeared with Bildsten’s septet at Chelsea Table + Stage, a new club on West 26th Street, and he has played at another new club in the Wall Street area called Casa Cipriani. He has also performed as a sideman in bands led by bassist Russell Hall, trombonist Jeffrey Miller, vibraphonist Joel Ross, and trumpeter Charles Turner.

Mason taught himself to play piano on a Casio keyboard his grandmother gave him as a 13th birthday present. Two years later, he took lessons at the JazzArts Initiative (now JazzArts Charlotte) camps. But the biggest influence on his decision to get serious about piano was Ray Charles, after seeing the movie, Ray. “Despite all the negatives in the movie,” he said, “I was driven by the spirit of the music.” His parents, he recalled, listened to recordings of Charles’ music in addition to other artists such as Luther Vandross and Barry White. “I grew up in the Black church,” he added, “and gospel was ingrained in my head. I want to continue to learn to have an affinity for older music and for the music now. I want to learn and grow from my peers and learn from those ancestors, like Coleman Hawkins.” –SANFORD JOSEPHSON