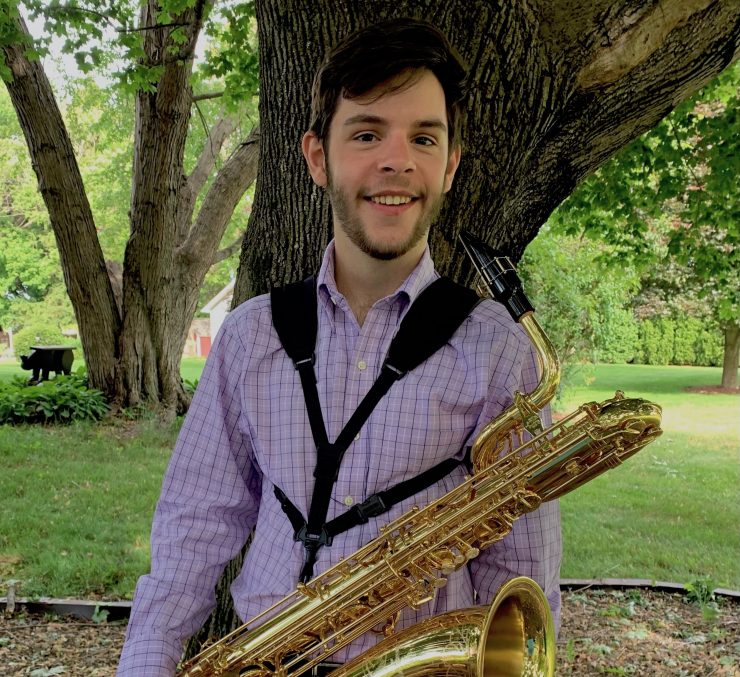 The names of the judges in the Gerry & Franca Mulligan Foundation’s ‘Gerry’s Jazz Challenge’ competition among high school music students were kept anonymous.

The results, though, were anything but mysterious. The contestants were judged on five categories: notes, sound, technique, intonation, and presentation. Tate Hanlon, a senior at Fairview High School in Fairview, PA, a suburb of Erie, scored the highest in all five classifications. His presentation, according to one of the judges, “was outstanding, as was his improvisation, and his interpretation of Gerry’s music.”

Mia Toschi, the Foundation’s Executive Director, pointed out that the judges — band teachers, professional saxophonists, and some GFMF board members — viewed YouTube links of the 15 finalists without even knowing their names.

Hanlon played alto saxophone for four or five years, changing to baritone saxophone when he entered high school because “I loved how low it sounded.” He’s majoring in Jazz Performance this fall at Pittsburgh’s Duquesne University and learned about Gerry’s Jazz Challenge while taking a lesson from saxophonist Mike Tomaro, Duquesne’s Program Director of Jazz Studies.

Students were asked to post a performance of Mulligan’s “Out Back of the Barn” on YouTube. “The due date,” Hanlon recalled, “was about a week later.” About a month later, “I got a phone call telling me I was the winner, and that was it.” The Grand Prize was a Selmer saxophone.

Early on, Hanlon learned about jazz from his older brother, Jonah, a trumpet player who is majoring in Music Education at Duquesne. He also credits his high school music teacher, Chad Mummert, with educating him about jazz. “Mr. Mummert was very important in my development,” Hanlon said. “He plays the euphonium, but he introduced the whole class to jazz.”

Fairview High School, Mummert said, “actually has a jazz class that we offer. Growing up, I was exposed to jazz, but I wish I had more exposure. I always had that appetite, but we didn’t have a class. When I became a high school teacher, I wanted to include jazz because it’s an important part of our American music.” He remembers when Hanlon switched from alto to baritone sax. “He came through really strong. I said to myself, ‘This kid’s going to go somewhere.’ There was healthy competition between Tate and his brother, Jonah. They went all the way to the state festivals. They would practice together at home and with their own groups. Going to the district jazz festivals, they got to meet some of the other strong jazz musicians. He definitely got bit by the jazz bug.”

Tomaro described Hanlon as “very driven. I met him virtually this past spring and then, later, we had a second, in-person lesson. He has a really great sense of what the music is all about. He really has adopted Gerry’s style of playing. My job is to open up some other avenues as well.”

From a music theory standpoint, Tomaro added, “Tate is just blossoming. He did a lot of playing by ear. There’s a lot to be gained from that. It’s a great first step for him. Now, he needs to apply the elements of harmony and jazz melody. There’s an adage that there are three steps to being a good improviser: first learn to play by ear; next learn all the theory; and the third step is to play by ear again. My job is to take him to the second and third steps.”

At Duquesne, Jazz Performance has just been added as an undergraduate degree. “Tate is one of our first Jazz Performance students,” Tomaro said. “It’s a very robust schedule. You have to perform almost every month — it’s not about rehearsing, it’s about performing. Students are also encouraged to go to jam sessions. They need to get their feet wet. Our own faculty members also sometimes put our students on gigs with them.”

In addition to Mulligan, the other baritone player that Tate “loves” is Ronnie Cuber, a musician known mainly for hard bop and Latin jazz, and someone Tomaro feels is pretty much the antithesis of Mulligan. But he thinks that is a good sign. “I did a workshop last week,” he said, “and I mentioned to the students the idea of being a chameleon. You have to imitate a lot of different players and then you realize your style.” Mulligan, Tomaro added, “was one of my influences. I got to Mulligan through Dave Brubeck and Paul Desmond.” One of his favorite albums was We’re All Together For the First Time, a 1973 Atlantic recording that features Brubeck, Mulligan, and Desmond with Jack Six on bass and Alan Dawson on drums.

Pointing out that “there aren’t many places around here [Fairview]” to play live jazz, Hanlon has been soaking up a lot of jazz virtually over the summer. “I love the music from Jazz at Lincoln Center,” he said, “and ‘Live From Emmet’s Place’,” the weekly online sessions presented by pianist Emmet Cohen.

Right now, Hanlon’s just “trying to focus on getting as good as I can so I can make the most out of college.” And, after college, will jazz be his career? “I’m dead set on that,” he said. “I’m going to see if I can make it work.” — SANFORD JOSEPHSON