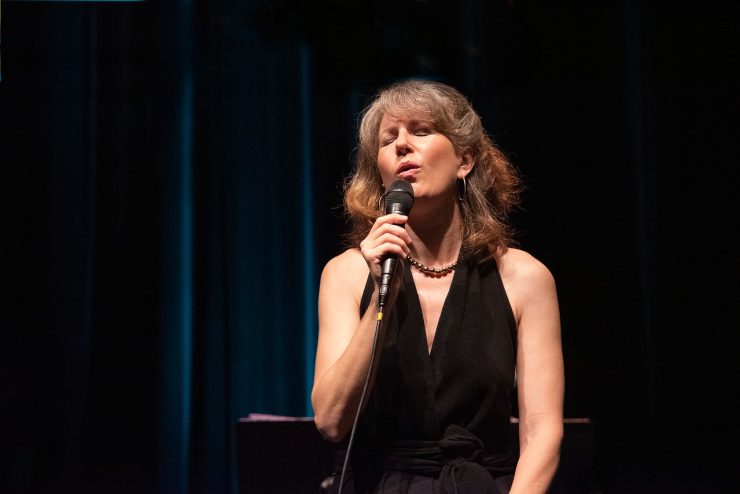 In this month’s Jersey Jazz, Joe Lang reviews Alexis Cole’s new Zoho album, Sky Blossom: Songs from My Tour of Duty. The recording, Lang writes, “presents her in the setting in which she performed during her Army stint (seven years as the vocalist with the U.S. Army’s West Point-based Jazz Knights).” It’s a big band album that includes a variety of familiar jazz and popular standards including the Gershwins’ “Love is Here to Stay”, Miles Davis’ “All Blues” (lyrics by Oscar Brown, Jr.), and Antonio Carlos Jobim’s “Triste”.

At 7 p.m. on Thursday, November 18, Cole will be singing selections from the album, plus some additional standards, and one of her originals at the New Jersey Jazz Society’s Virtual Social.

Cole recently returned to her alma mater, William Paterson University, as Chair of the Jazz Vocal program, succeeding her mentor, Nancy Marano, who has retired. She’ll also continue to teach Vocal Jazz at SUNY Purchase. “I feel grateful,” she said, “to be at the two greatest local conservatories close to my home.” Two of her former students at Purchase have recently been featured in Jersey Jazz — Lucy Wijnands (‘Rising Star’, June 2021) and Samara Joy (‘On the Road Again’ (July/August 2021).

About six years ago, Cole recorded an album with Bucky Pizzarelli called A Beautiful Friendship (Venus Records: 2015). “I let Bucky be in the driver’s seat,” she told Jersey Jazz’s Schaen Fox. “I just had to get out of the way, let him do his thing and plug into what he was doing . . . It was great. I gave him a list of about 300 songs that I sing, and he and I went through them, and he picked the repertoire.” Reviewing the album for JazzTimes, Christopher Loudon wrote, “The richness of Alexis Cole’s vocal gumbo is rather extraordinary, combining the warmth and clarity of Doris Day, the verve of Jo Stafford, the cool sophistication of Chris Connor, and the authority of Keely Smith.“

Cole’s versatility surfaced 11 years ago when she recorded an album with the hard bop sextet, One For All (tenor saxophonist Eric Alexander, trumpeter Jim Rotondi, trombonist Steve Davis, pianist David Hazeltine, bassist John Webber, and drummer Joe Farnsworth). You’d Be So Nice To Come Home To (Venus Records: 2010), was reviewed by AllAboutJazz’s Dan Bilawsky, who wrote that, “Vocalist Alexis Cole hasn’t found a setting or theme that doesn’t suit her . . . She’s made it clear that she’s not one to repeat herself — no two albums from Alexis Cole are alike.”

The November 18th Social will be streamed on the njjs.org website as well as on the NJJS Facebook page and YouTube channel. There is no admission charge, but donations are welcome and appreciated.

Funding for the NJJS Socials has been made possible, in part, by Morris Arts through the New Jersey State council on the Arts/Department of State, a partner agency of the National Endowment for the Arts.