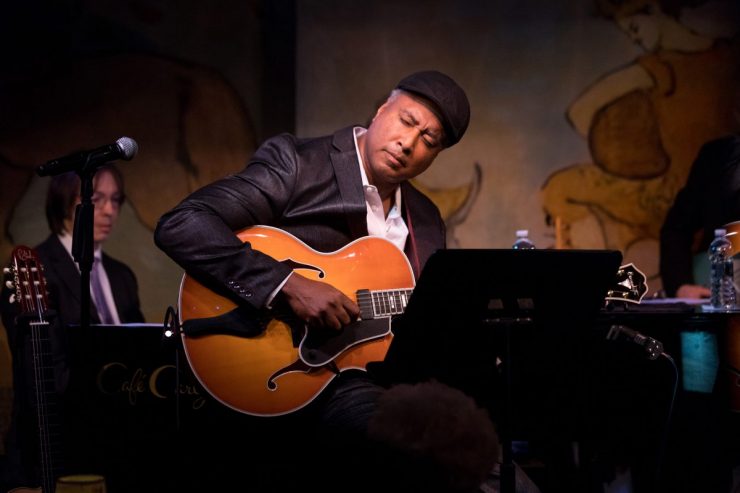 While Bernie Williams (pictured) no longer helps power Yankee baseball, on October 22 at the Woodland in Maplewood he will help power the Bernie Williams-Gil Parris Quartet. The famed MVP guitarist and his Grammy nominated mentor were happy to talk about it, because as Williams said, “Circumstances, over the last year and a half have been really hard. We’re looking forward to get back to some semblance of normalcy when it comes to performance. The material will be a mix of some classic things with creative arrangements and some original material too; and we’re excited about the opportunity.” Parris quipped, “Yeah, we are tired of the roar of the laptop.”

Their rhythm section will be bassist Will Lee, who has recorded with everyone from Barbra Streisand to Yusef Lateef, and drummer Josh Dion who went from William Paterson University to backing such luminaries as Chuck Loeb, Pat Martino, and Randy Brecker. Parris explained, “We both have known Will and Josh for a long time. Josh is also an incredible singer, and so is Will. We will get into some vocal things that will be really entertaining.”

Williams explained that the leaders have long been friends. “Before I retired, I was living in Westchester County. Usually after games I would stop in White Plains to check out this band which was almost like a jam situation, and Gil was there. I became a really big fan of his playing, and I introduced myself. He is a big sports fan, so he recognized me and was aware that I played a little guitar. He was very encouraging and frankly, took me under his wing. He has been one of my mentors, I’m really grateful for his friendship.

“After I retired, I applied to the Manhattan School of Music. I went through their whole jazz program, and Gil was able to apply what I was learning in school up to the point that he offered me to sit in with him at more serious gig. One thing led to another to the point that we are now co-arranging and playing in a lot of great venues. It has been very well received, and I’m looking forward to what the future brings.”

Parris agreed. “Bernie’s attitude is amazing. The first big concert we did, I had a DVD shoot with Paul Shaffer, Randy Brecker, and all these players. Bernie jumped up, and he killed it. Because we’re such good friends, playing-wise, we’re very in tune. I think that’s part of what the audiences like to see.”

For this special evening, the guest MC will be Maplewood’s Mayor Frank McGehee. Appropriately, the opening act is the local band The Baker Street Trio, a high school age jazz group that played at the Montclair Jazz Festival Grand Finale on September 25. Part of Montclair’s Jazz House Kids program, the trio consists of two Maplewood residents — pianist Ben Collins-Siegel and drummer Ben Schwartz. They are joined by bassist Ryoma Takenaga of New Providence. The night before the Williams-Parris concert, they will be joined by alto saxophonist Alex Laurenzi to perform at the NJ Jazz Society’s Virtual Social, streaming on the njjs.org home page as well as on the NJJS Facebook page and You Tube channel

In addition to performing regularly, giving back is important to both Parris and Williams, especially promoting music education. Parris spent a long time with the non-profit Little Kids Rock, going to schools in Brooklyn, Queens, and the Bronx to talk and play and just try to inspire. Williams added,” We were able to go every year for the last 10 years, pre Covid, to Capitol Hill, to advocate for music and arts education. We were able to get some laws passed at the federal level that allow federal resources to address the need for music and arts education in schools. It has been a very rewarding process for me, because music, even when I was playing baseball and before that, when I was in school, was a very, very important aspect of my life. It really shaped the way that I go about things. Having that opportunity to pursue my interest in music at a very young age certainly helped my discipline and my sense of commitment as a professional athlete in baseball. I’ve always been an advocate for music and arts education.”

Due to the covid threat, it remains questionable if the artists can do a meet and greet after the performance. Both expressed a willingness, but they do not know what the situation will be on that night. — SCHAEN FOX