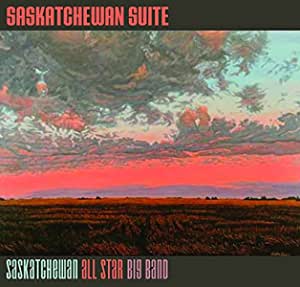 When you hear mention of Regina, Saskatchewan, jazz is not a word that immediately comes to mind. In fact, the Regina Jazz Society has been promoting and presenting jazz since 1989. One of its recent undertakings was commissioning Fred Stride to compose a work that captures the history of Saskatchewan. The result can be heard on Saskatchewan Suite (Chronograph Records – 094) by the Saskatchewan All Star Big Band. The band includes musicians who grew up in Saskatchewan, got their start there, or came there to live, teach, and perform in the province. Stride has created eight musical portraits relating to various aspects of the province’s culture and history. The most ambitious is the closing piece, “Saskatchejazz,” an extended selection that references the growth of jazz from the 1920s into the 1980s, covering ragtime, swing, bebop, cool jazz, Latin jazz, and fusion. One does not have to be familiar with Saskatchewan to appreciate Stride’s writing and the exemplary execution of his impressive charts by the musicians. Big band jazz is an eclectic genre and Saskatchewan Suite touches many bases in an engaging manner. (jazzregina.ca)

With the cleverly titled new album, The Mask-erade Is Over (Summit – 784), the Dave Miller Trio — pianist Miller, bassist Andrew Higgins and drummer Bill Belasco — delivers a spirited take on a dozen pop and jazz standards including “Be Careful, It’s My Heart,” “The Masquerade Is Over,” “Yardbird Suite” “Estate” and “Just Imagine,” plus Miller’s own “Dusty.” Miller takes most of the songs on a rollicking ride with strong support from his partners. It is nice to hear him in a strictly instrumental setting as most of his releases over the last decade have been as an accompanist for his daughter, the fine vocalist, Rebecca DuMaine. Fine, swinging piano trios are a staple of the jazz scene, and Miller and his buddies are top notch in this format. (www.summitrecords.com)

Drummer Gerry Gibbs, son of the legendary vibraphonist Terry Gibbs, has hooked up with several jazz stars to form four different trios, called the Thrasher Dream Trios, to play 18 appealing compositions by his father on the two-disc set, Songs from My Father (Whaling City Sound – 131). Gibbs serves as drummer for the trios with pianist Chick Corea and bassist Ron Carter on Trio Number 1, pianist Kenny Barron and bassist Buster Williams on Trio Number 2, pianist Patrice Rushen and Hammond B3 organist Larry Goldings on Trio Number 3, and pianist Geoff Keezer and bassist Christian McBride on Trio Number 4. The booklet explains the intricacies of putting this album together. One person who was instrumental in this project was the late pianist Corea. He contributed the one selection not composed by Terry Gibbs, a tribute to Terry titled “Tango for Terry. Most of the tunes are up tempo, many with catchy titles such as “Kick Those Feet,” “Bopstacle Course,” “The Fat Man,” “Hippie Twist”, and “Gibberish.” Then there is a tune like “Lonely Dreams” that could have been a theme from a film noir. With the caliber of musicianship present on these tracks, it is not surprising that this music grabs you from the first track. (www.whalingcitysound.com)

In her liner notes to Songs from Other Places (Candid – 30032), vocalist Stacey Kent gives insight to the thoughts behind her song selection for this new album. While she was born in New Jersey, she has spent much of her life living abroad and has always had a sense of wanderlust. With the sensitive support provided by pianist Art Hirahara, she has chosen an eclectic program of 10 songs that speak to her keeping an eye on what is over the horizon. The songs include some from the contemporary pop field, Paul Simon’s “American Tune,” Lennon and McCartney’s “Blackbird” and Stevie Nicks’ “Landslide;” a couple of Jobim selections, “Bonita” ands “Imagina;” the late French-Canadian singer/songwriter Raymond Lévesque’s “Les Voyages;” three original songs by Kent’s husband/saxophonist Jim Tomlinson and lyricist Kazuo Ishiguro; and the wonderful standard, Kurt Weill’s “My Ship.” Kent invests each song with the intellectual insight and emotional intensity that has been present in her singing since she first arrived on the scene in London during the early 1990s. (www.staceykent.com)

Vocalist/lyricist Lorraine Feather has dug more deeply into her emotional life and feelings with each passing album. My Own Particular Life (Relarion – 315), her 13th album, is her most personal statement to date. It combines elements of jazz, classical music, and spoken word in 10 very personal songs. Feather collaborated with guitarist Eddie Arkin and pianists Shelly Berg, Russell Ferrante, and Dave Grusin on the songwriting. This is not an album filled with hummable tunes and transparent lyrics. In fact, the words are best digested by referencing Feather’s liner notes that give the background for each of them. It is also nice to have the lyrics printed in the booklet to read along as you listen to her vocalizing, and to revisit them away from the music. You probably have gotten the impression that Feather has presented the listener with a challenge, but making the effort to absorb what she has to offer is a rewarding experience. (lorrainefeather.com) –JOE LANG

Ellington and Strayhorn: Alone and Together