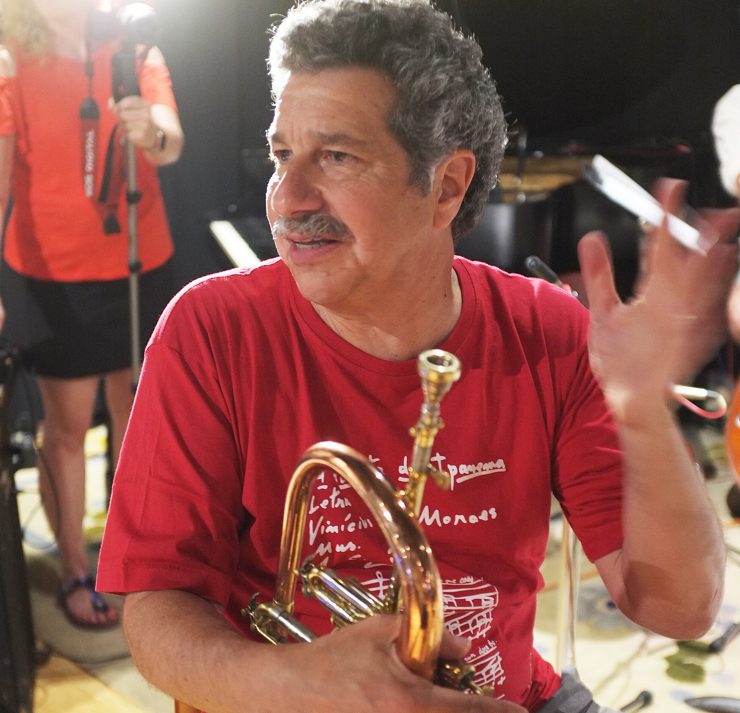 Mark Morganelli’s love of Brazilian music began some 40 years ago aboard a boat with his then girlfriend, hearing its infectious rhythms drifting over the water from a nearby shore. And when that rowboat ride on Central Park Lake was over, Morganelli followed his ears to the sound of a nearby samba band being conducted by Guilherme Franco and Marcio Sapel, Pe-De-Boi.

Morganelli, who will be playing at the New Jersey Jazz Society’s September 23rd Virtual Jazz Social, introduced himself and soon found work as a trumpet player with the band, playing carnival-themed engagements that included raucous music and scantily clad dancers. The high-energy performances often included two-hour sets with a brief intermission. “The drums would just go for two hours, (Franco) would call tunes. My lip would be on the ground.”

At about the same time, Morganelli was running a jazz loft on Broadway at Bleecker Street called The Jazz Forum, which he’d previously operated at Cooper Square. Soon he was presenting “Samba Sundays” featuring Pe-De-Boi with such guests as trumpeter Woody Shaw and saxophonist Sonny Fortune. The music was a big success, so much so that, “I got a threatening letter from five co-op boards,” which ultimately forced a change of venue to Art D’Lugoff’s nearby Village Gate.

Morganelli’s business partner in the Broadway loft, Tony Giuliano, introduced him to the bossa nova music of saxophonist Stan Getz, which led to an appreciation of composer Antonio Carlos Jobim. The late Brazilian trumpeter Claudio Roditi, whom Morganelli presented and recorded, “was my dear friend and inspiration.”

A mainstream jazz fan when he graduated from Bucknell University in the 1970s, Morganelli found himself drawn to presenting and recording many of the surviving stars of the bebop era as well as modern jazz icons. He has crossed paths with such legends as Barry Harris, Lee Konitz, and Dizzy Gillespie, among many others. As a producer, he has presented shows at Carnegie Hall, Jazz at Lincoln Center, Riverside Park, The Tarrytown Music Hall, and his current regular venue, the Jazz Forum jazz club in Tarrytown, NY. He and his wife Ellen Prior present music in the club via their nonprofit organization, Jazz Forum Arts, as well as at parks throughout Westchester County.

A culmination of his four-decade musical efforts, Brasil!: Mark Morganelli and the Jazz Forum All-Stars (2019: Jazz Forum Records), is a two-CD album loaded with nearly two hours of tunes from that country, particularly heavy with works by Jobim.

At the Social, Morganelli will be presenting a performance recorded earlier this summer at one of The Jazz Forum’s free outdoor live performances. The band includes Midi-accordionist/vocalist Eddie Monteiro and percussionist Nanny Assis. The Social will be streamed at 7 p.m. on the njjs.org website as well as on the NJJS Facebook page and YouTube channel. There is no admission charge, but donations are welcome and encouraged.

Funding for the NJJS Socials has been made possible in part by Morris Arts through the New Jersey State Council on the Arts/ Department of State, a partner agency of the National Endowment for the Arts.– STORY AND PHOTO BY MITCHELL SEIDEL