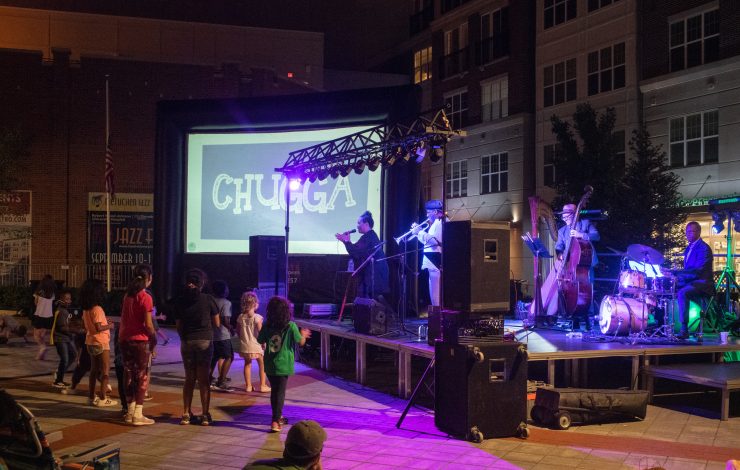 Fans of trumpeter Marcus Printup attending the Central Jersey Jazz Festival in downtown Metuchen on September 11 may have been thinking back to Printup’s 1996 Blue Note album, Unveiled. Printup led off his quintet’s concert with Amazing Grace in acknowledgement of the 20th anniversary of the 9/11 attacks. That moving hymn appeared on Unveiled, but in Metuchen, Printup was accompanied, beautifully and emotionally, by his wife, classical harpist Riza Printup.

Among the Printup original compositions played afterward with his quintet, the highlight was “Leave Your Name and Number”, a tune also on the 1996 album that had its genesis as the centerpiece of Printup’s phone voice mail message. Printup’s quintet contained an energized combination of veterans – drummer Willie Jones III and bassist Sean Conly – and rising stars – tenor saxophonist Emilio Modeste and pianist Mika Nichimura.

Earlier in the evening, Riza Printup and the musicians in the quintet led a multi-media audience participation presentation called “Jazz Storytime with the Printups”. Target audience was children, pre-k to 5. The evening’s festivities led off with the Metuchen High School Jazz Ensemble Big Band led by John Messenger, Director of Bands.

In March 2020, the Printups released an album, Gentle Rain, on the Steeplechase label, featuring the two of them without any other instrumentation. JazzTimes’ Veronica Johnson, pointing out that “trumpet and harp may not seem the mostly likely match,” added that, “the Printups expose a striking beauty to the combination.”