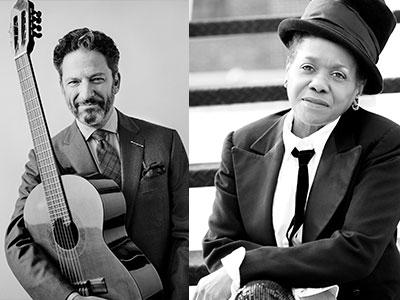 On Saturday, September 25, they are scheduled at the South Orange Performing Arts Center and the following night, Sunday, September 26, at The Jay and Linda Grunin Center for the Arts in Toms River. These are two highly skilled artists who have successful independent careers, but who enjoyed occasionally performing together long before the pandemic struck. As Russell told me a few years ago, “We have been doing maybe one or two a month in different festivals, performing arts centers in different parts of the country, all over the place.”

The basic format is simple: Russell sings songs associated with Billie Holiday, and Pizzarelli does some associated with Frank Sinatra. It grew out of Russell’s appearance on Pizzarelli’s syndicated and podcast show, Radio Deluxe, in 2016. Actually, only the format is always the same. As the ever-buoyant Pizzarelli explained, “We have been doing the show for a while, and it is great because Catherine is so good. I’m glad that I get to go first. If there is no intermission, I’ll do 40 minutes or so, and then she will do 40 and then we close together. She is so musical and wonderful that it is a great evening of music. What’s really been terrific about it is that Catherine has so much energy, and the show is really fun.”

Russell enlarged on that outline. “The setup is that John starts the show, and I am actually a guest. He does some Sinatra stuff he has recorded and talks about when he met Frank Sinatra. In the second part of the show, he introduces me. I come on, join him, and I do several songs with John and the band and then a couple of songs with just John accompanying me on guitar.”

Pizzarelli added, “The just guitar and voice things are always exciting. And there’s something special that she has that makes every show just special and a fun show to play. It’s so musical and everything works so well, it’s a well-oiled machine. I love just hearing her sing, I love playing for her, and I could play it over, and over, and over again.”

While the format remains constant, the content, does change. Lady Day and Old Blue Eyes both left impressive musical legacies, so Russell and Pizzarelli had more than enough material to compile several versions. Russell explained: “I do different repertoire in this show than I do in my own show. This is an homage to tunes that both of them recorded. There is so much material to choose from, but we choose songs that we feel are compatible with each other and give the show a nice flow. It is fun. He is a lot of fun, a true comedian in the old school sense. He just comes up with things off the top of his head, like I used to see Robin Williams do. I worked in comedy clubs for four years straight, so I saw everybody. He comes up with things, and they are always funny. He is a great showman and a great musician. We get along very well. The more we do the show, the more we enjoy working with each other.”

Pizzarelli anticipates that the September concerts will have some new material, “I’ll talk to Catherine and see what we are going to do. We worked together on Ken Peplowski’s on-line show (In The Moment, July 29 on Facebook.) There were a couple of things in there that I really thought were great, so it is just getting the band together on Catherine’s things. Maybe there will be other material.

The band will include “Isaiah Thompson — I think he’s from West Orange — on piano and Mike Karn on bass, who lives in Bloomfield, on bass. So, we have a good Jersey contingent in the band. Mike has been with me for about four years now. He is a sensational bass player. He was originally a saxophone player years ago but always had an affection for the bass and has been playing the bass with us for a while; and he’s just terrific, a great musician.

“Isaiah is a youngster. I don’t know if he’s 25 yet, and he’s been playing with everybody from Wynton Marsalis to Ron Carter. He did his first gigs with me in December of 2019. Then he did about four gigs with me right before the lockdown. He actually was on the bandstand on March 12, the last night I was in New York. He is a great piano player and a great kid, and I’m looking forward to working with him again. It’s been too long.”

Thompson was featured as the ‘Rising Star’ in the November/December 2020 issue of Jersey Jazz. In that article, Pizzarelli recalled playing with him, “when he was 16 and part of Jazz House Kids. I never forgot him. I’ve always been attracted to his love for the music and dedication to the right sounds . . . I’m looking forward to making more music with him for a long time.”

JazzTimes’ Lee Mergner profiled Karn in April 2020 and pointed out that, “in the long history of jazz there have only been a few artists who’ve made the transition (from saxophone to bass).” One example was the legendary bassist Scott LaFaro, who played tenor sax in high school before become Bill Evans’ bassist in the late 1950s. “Bass,” Karn told Mergner, “is a mentality. I play solos, and I think I do pretty good, but that’s not why I went to the bass. I went to the bass because of the accompanying. I love walking bass lines. You have to be cool with the mindset of being somewhat in the background.”

One of the more memorable Sinatra songs from previous “Billie & Blue Eyes” performances has been Jule Styne’s “It’s Sunday” with lyrics by Susan Birkenhead. It was recorded by Sinatra in 1983 with just the accompaniment of guitarist Tony Mottola. When asked if it would be in the September concerts, Pizzarelli replied, “I like to do ‘It’s Sunday’ as much as I can. I actually have a letter from Tony talking about him liking my version. I sent it to him when I recorded it in ’96, when he was still around”

Beyond delaying the shows for more than a year, the pandemic has had no lasting effect on the format. But, as of this writing, it could affect their appearance. “I do think there’s still an abundant amount of caution to be taken,” Pizzarelli explained. “I’m trying to figure that part out. I saw that Ron Carter’s group all wore masks when they played at the Blue Note.”

In a stretch from December 2020 through June 2021, Pizzarelli’s father, the guitar legend Bucky Pizzarelli, and his wife, Ruth, died, along with pianist Ellis Marsalis, vocalist Freddy Cole, composer Johnny Mandel, and alto saxophonist Jeff Clayton. “Well, it was a weird time,” Pizzarelli recalled. “It happened all at the same time. We were just sitting at home every day, and a different bit of information would come in that was Covid-related, and then the phone would ring or you’d look online and something else would happen. You just sort of shook your head, dug in, and hoped that was going to end soon.

“Usually, musicians have ways of getting together and mourning or celebrating the life of someone who has passed, and all those things never happened. So, it was really strange, it was more of calling up somebody. I called John Clayton (Jeff’s father) a couple of times a week. He was very close to Mandel also. There was no way to have closure on that. Especially with Bucky and my mother. We haven’t had a proper wake, funeral, or anything. So, the whole thing was, and still is, very strange. I think that’s why we’re so anxious to get back to work so we can at least be with people and have that kind of release.

“I did two gigs by myself, just the first, and second of August. The energy in general has been so exciting, a real pleasurable thing to go out, and play, and go, ‘Wow.’ It’s emotional, it’s moving and tremendously enjoyable. Hopefully that won’t wear off for a while. I’m looking forward to that. These gigs are the first ones we’ve played together for 17 months.”

Will they still do the traditional post performance meet and greet? As of this writing, they may. In the past, both artists enjoyed spending time with audience members after the show. Now, the surging Covid-19 caseloads put that in doubt. “If people feel safe enough, then I will meet and greet,” Russell said. Pizzarelli added, “That’ll depend on where we’re at, but I’m thinking we will. You never know what that is from day to day. I think we will have a better picture of it by mid-September. Hopefully we will, and I look forward to it.” –SCHAEN FOX

The SOPAC concert will be performed at 8 p.m. on September 25. For ticket information, log onto sopacnow.org or call (973) 313-2787. At press time, SOPAC was requiring proof of Covid vaccination or negative Covid test result. Masks will be required.

The Grunin performance will be at 7 p.m. on September 26. For ticket information, log onto grunincenter.org or call (732) 255-0500. At press time, masks were being required, and tickets were being sold in socially distanced pods.

JALC on the Back Deck: Sherman Irby and Marcus Printup