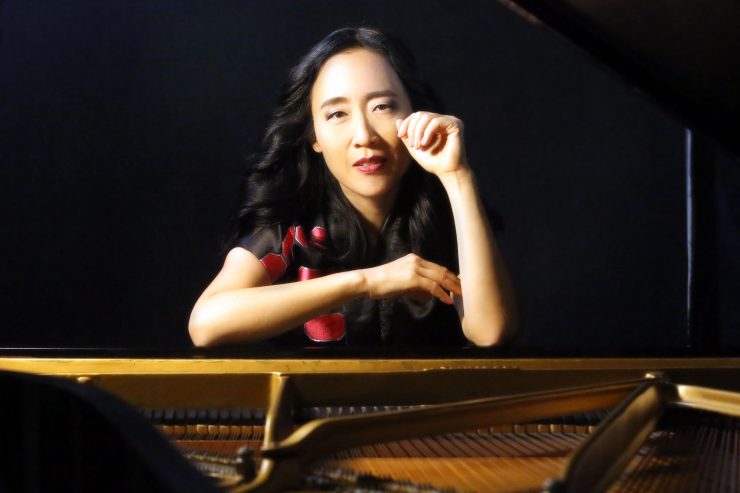 Sung, in above photo, will open the second day of the festival at 1 p.m. According to NPR Music’s Suraya Mohamed, her 2018 album, Sung With Words, a music and poetry project with poet Dana Gioia, “merges jazz and poetry together to make a multi-movement work that explores themes of the human condition: love, betrayal, wonder, melancholy, and mystery.” Jensen was part of the band on that album, which also included John Ellis on saxophones and bass clarinet and vocals by Carolyn Leonhart and Charenee Wade, Christie Dashiell, and Jean Baylor.

Jensen, appearing at 3 p.m. on Sunday, September 19, is part of Artemis, the all-female septet led by pianist Renee Rosnes that was featured on the March 2021 cover of Jersey Jazz and was voted Mid-Sized Ensemble of the Year by the Jazz Journalists Association.

In a “Talking Jazz” feature in the May/June 2020 issue of Jersey Jazz, Jensen talked to JJ’s Schaen Fox about the mentorship of Clark Terry, one of her jazz heroes. “Clark Terry,” she recalled, “was a darling to me. Since he heard me play, I was in his entourage of young people that he mentored. It was a membership I had for life. No matter where he was or I was, when we met each other, it was like no time had passed. It was all about playing some music, having some laughs and positive vibes together. He was truly the essence of positive energy and inspiration.”

Another jazz trumpeter who considers Terry a hero is Jeremy Pelt, a member of the Black Art Jazz Collective, which will be the final Jazz at the Lake performance at 5 p.m. on Sunday. Pelt led a virtual centennial tribute to Terry in December 2020 at William Paterson University. When asked by Jersey Jazz what Terry meant to him, Pelt replied, “sophistication, swing, and humor. Plus, he was the perfect showman without being cheesy. Everybody loved him, and he was a virtuoso.” Other members of the Black Art Jazz Collective are: saxophonist Wayne Escoffery, trombonist James Burton III, pianist Victor Gould, bassist Rashaan Carter, and drummer Mark Whitfield, Jr.

The opening performance on September 17 will be Blind Visionaries: Daniel Kelly & The Seeing with Photography Collective, a multi-media presentation featuring photography created by the blind and visually impaired members of The Seeing Eye Collective with original music by Daniel Kelly. Other performers will be: saxophonist Dayna Stephens, pianist Aaron Parks, saxophonist/percussionist Yosany Terry, and vocalist Stephanie Chou.

The Lake George Arts Project was established in 1977 to offer comprehensive programs in the arts. The first Lake George Jazz Weekend was held in 1984 featuring such artists as saxophonists Henry Threadgill and Nick Brignola and vocalist Sheila Jordan. Major sponsors of the event are Kenneth and Susan Gruskin of the Gruskin Group, an integrated design and creative services company based in Springfield, NJ.