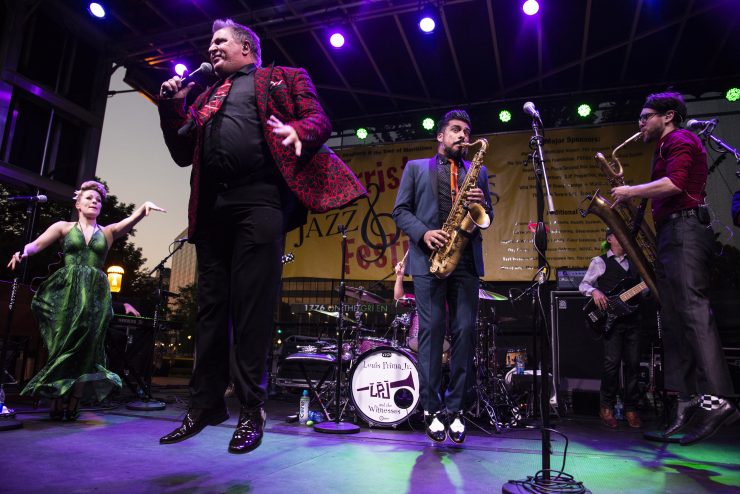 The Green in Morristown was transformed into a Saturday night dance party when Louis Prima, Jr. and the Witnesses took the stage at the Morristown Jazz & Blues Festival Saturday night, September 18. As one audience member exclaimed, “They were a super energetic group and really got all of Morristown rocking.”

Quite a few members of the audience moved from their seats and went up front to dance, and the band members came off the stage and marched around the audience, with many of the dancers following. As expected, the band played several tunes associated with Prima, Jr.’s father — such as “Sing Sing Sing” and “Just a Gigolo”. But they also treated the audience to some selections from the 2014 Louis Prima, Jr. Warrior Records album, Blow. When that album was released, JazzTimes’ Christopher Loudon pointed out that, while “Prima, Sr., was a master of controlled chaos . . . Prima, Jr., captures his old man’s frenetic party-all-night ethos ably [but] his sound is more loosely explosive with distinct rock underpinnings.”