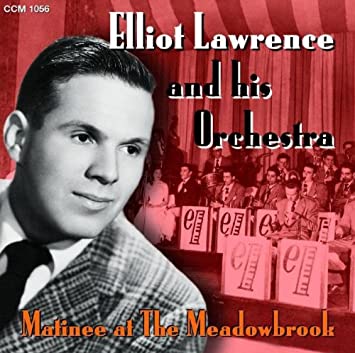 Although Best Known for Broadway and TV, Elliot Lawrence Got His Start Leading Big Bands

Elliot Lawrence, who died July 2, 2021 in New York at the age of 96, got his start as a big band leader before moving on to a prominent career on Broadway and in television. Excused from military service during World War II because of severe asthma, Lawrence led the house band at Philadelphia’s WCAU Radio where his father was the station’s Program Director.

“Mr. Lawrence may not have had as large a following as other bandleaders, such as Woody Herman and Count Basie,” wrote The Washington Post’s Matt Schudel (July 21, 2021), “but he recorded a number of well-received albums, toured the country, and fostered the careers of many prominent musicians and arrangers, including Gerry Mulligan, Al Cohn, Red Rodney, and Johnny Mandel.”

Because of his association with Mulligan, I interviewed Lawrence in October 2012 for my book, Jeru’s Journey: The Life and Music of Gerry Mulligan (Hal Leonard Books: 2015). Mulligan and Rodney, Lawrence told me, “were into the early days of bebop. They got me listening to it, and that’s how Gerry started to write for the band. Gerry was given the jazz things — the ‘hot’ things — and I wrote the ballads.” Lawrence was eventually signed to a recording contract by Columbia Records and continued to incorporate Mulligan arrangements into his repertoire after Mulligan left his band to join Gene Krupa. “Gerry wrote from wherever he was on the road. I bought a lot of his arrangements — ‘Between the Devil and the Deep Blue Sea’, ‘Swingin’ Door’, ‘Happy Hooligan’.

“When I reorganized the band on the road,” Lawrence added, “he [Mulligan] came back and played baritone with the band. I don’t remember the year, but it was before he went to California in the early ‘50s.” That band, according to Schudel, “was called the Elevation Band after a boppish tune Lawrence and Mulligan wrote, which became a minor jazz classic”

In the early 1950s, Lawrence began working for CBS Radio and Television and was recruited by Marge and Gower Champion to be the Music Director for the Broadway musical, Bye Bye Birdie. He received a Tony Award nomination for that show and then won a Tony for How to Succeed in Business Without Really Trying.

While working in television, Lawrence won 10 Emmy Awards. He was the Musical Director of the Tony Awards for 46 years — from 1967 to 2013 — and his last Emmy was for the 2013 Emmy telecast. His other Emmys included awards for musical direction and composition for the soap operas, As The World Turns and Edge of Night, and the Kennedy Center Honors, for which he directed the musical portions several times between 1993 and 2005. Lawrence also conducted and arranged musical specials for numerous well-known performers such as Patti LaBelle, Ann-Margret, and Dionne Warwick.

He is survived by two sons, Jamie Lawrence, a musician and composer, and Danny Lawrence, both of New York; two daughters, Alexandra Lawrence of New Haven, CT, and Mia Lawrence of Katonah, NY; and five grandchildren. — SANFORD JOSEPHSON