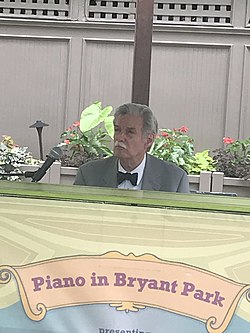 Joel Forrester so loves Bryant Park’s free Piano in the Park setting that he is returning from France to play there July 12-16 from 12:30-2:30 pm. When asked the allure of playing outdoors in that midday weather, he explained: “I love it for three reasons. Above all, I like watching all the random movement and the many mini-narratives. Second, the audience is made up of people who love my music and complete strangers. Some of the second group are instantly captivated, some are mystified at first, but eventually enjoy themselves. Others are angry that their afternoon, or perhaps their lunch, has been interrupted. Thirdly, I love playing in Bryant Park because it is a union gig that pays very well.”

Perhaps, because this will be his 10th year there, “Bryant Park asked me to compose an official theme song for the series. It is called ‘Piano in the Park.’” Forrester is a prolific composer, and he has used that talent while unable to perform due to Covid-19.

“I have been asking people on my mailing list who would commission me to write a tune, dedicated to either the person who is commissioning me or to the person or entity of his or her choice. I’m up to something like 176 commissions over the last two years, of which I have honored about 150. I offer different choices of music that I can compose — ragtime, boogie-woogie, stride, bebop and something that I call salon pieces. There’s a minimum fee of $50 per composition, but many people have given me more than that out of the goodness of their hearts.”

Forrester last played in New York in early 2020 at the now defunct Jules Bistro in the East Village. When he was preparing to return to France, he indicated he intended “to come back twice a year to do gigs which would disappear otherwise.” Of course, the pandemic delayed those plans.

His other area gigs this time include: The Barnstock in Woodstock, NY, July 10; Barbes in Park Slope, Brooklyn, July 11; and Little Branch in the West Village, July 14.