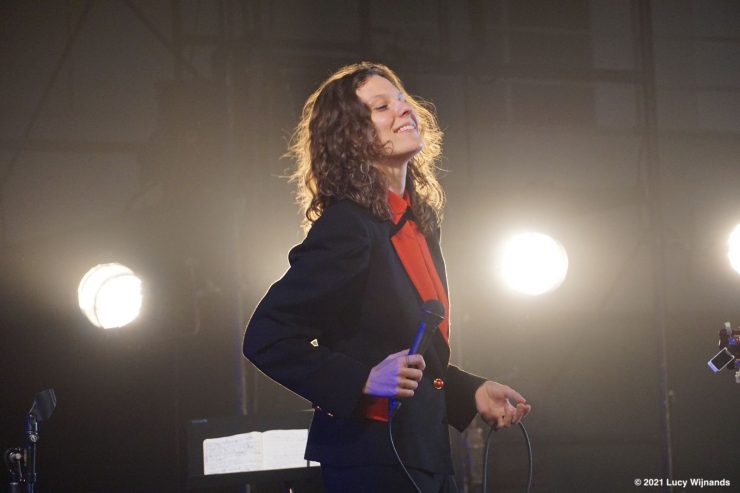 This is one of two articles from the June 2021 issue of Jersey Jazz Magazine being made available to everyone. For complete access to all articles in our award-winning Jersey Jazz magazine, please join the New Jersey Jazz Society by clicking HERE.

Contestants in the fourth annual Ella Fitzgerald Jazz Vocal Competition, sponsored by the Blues Alley Jazz Society, were asked to sing three selections from the 1964 Verve album, Ella Fitzgerald Sings the Johnny Mercer SongBook. That request, said Lucy Wijnands, the winner, was “a gift from heaven. Johnny Mercer is absolutely my favorite composer.”

Her three Mercer selections were: “Too Marvelous For Words”, “Laura”, and “Dearly Beloved”. The latter song was not on the album, but Harry Schnipper, BAJS Executive Director and Owner of Washington D.C.’s Blues Alley jazz club, allowed some flexibility. Once Wijnands began singing, the judges were captivated. Said Alison Crockett, Adjunct Professor of Music at George Washington University: “I saw in her a mature, confident sound with a definitive musical outlook that had me singing with her. If I want to sing with someone, that hooks me every time.” Added Dr. Darden Purcell, Director of Jazz Studies, Voice, at George Mason University: “Lucy has an exquisite voice with impeccable diction, and her interpretation of the repertoire was highly musical. She has a great career ahead of her.”

Originally from Kansas City, the 23-year-old Wijnands graduated in 2020 from the Conservatory of Music at SUNY Purchase where she was the Ella Fitzgerald Scholar and recipient of the President’s Award of Achievement. In 2016 — her freshman year — she appeared in concert at Jazz at Lincoln Center’s Appel Room. She also completed a five-month residency with the Birdland Big Band, directed by David DeJesus, and has performed with trumpeter Jon Faddis and tenor saxophonist Joe Lovano, among others.

Now settled in Brooklyn, Wijands will be appearing at New York’s Mezzrow on June 15 with pianist Gadi Lehavi. She is also working on a new self-produced album entitled You’ll Never Walk Alone, inspired by the Rodgers and Hammerstein song from the musical, Carousel. The album is “still very early in the works,” she said, “but my plan is to make it an interdisciplinary album related to my paintings.” The daughter of stride pianist, Bram Wijnands, and art historian, Lisa Smith, Wijnands always painted in addition to singing, and her visual art “picked up during the pandemic. My mom said to me, ‘Why don’t you start throwing some paints?’ I became obsessed. Now that I’ve been painting, it has brought me closer to my music. The album will have a catalog with sketches and lyrics. So, it will be CD/vinyl/catalog.” Her goal is to release a single of “You’ll Never Walk Alone” in July or August and the album by the end of the year or in early 2022.

“After a year of nothing going on, I look forward to doing live performances again,” she said. With the album, her goal “is to remind artists that they have a place in this unstable world. It can be easy to feel lost or discouraged, but art represents who we are, what we care about, and what we’ve been through. You’ll Never Walk Alone celebrates music, painting, singing, togetherness, and much more.”

Both of Wijnands’ parents have been major influences on her. “My father,” she said, “is a master of the stride piano. He also builds renaissance era instruments and plays accordion, bass, and guitar. But the piano is his master instrument. I grew up singing with him on his gigs in Kansas City.” Though her mother’s specialty is visual art, “she was always singing — Stevie Wonder, funk music. That’s why she was drawn to my dad.”

In 2013, the family moved from Kansas City to Hastings-on-Hudson, NY, in Westchester County. For Lucy and her twin sister, “it was hard — two [teenage] women from the Midwest moving to what was completely different country.” She began taking voice lessons in New York City from singer/composer/producer Anne Phillips, taking the train into Manhattan every week. Phillips, said Wijnands, was “my complete inspiration, my mentor, a beautiful singer and composer.”

Describing her teaching technique to Jersey Jazz, Phillips said, “The first thing I look for is pitch and time. Obviously, Lucy has both of those. She doesn’t sing any bad notes. She really wanted to learn the American songbook and jazz standards. We really worked on lyric understanding. By the time she was a senior, I went to see her high school production of Les Miserables. When Lucy stepped on the stage, it was like a pro stepped into the cast. She tells a story. She connects with the audience.”

The education at Purchase, Wijnands said, “was great.” She singled out four faculty members who were her primary mentors — pianist Pete Malinverni, Jazz Studies Chair; vocalist Alexis Cole; and trumpeters Faddis and Ingrid Jensen. “They were my squad,” she said.

Cole “loved having Lucy in my studio. She would consistently bowl me over with her soulfulness and sincerity. When she would perform, her singing would bring me to tears. She’s also one of the most rhythmic singers I’ve heard. She kills at up tempo swing and fast samba numbers as well as being an artist of great depth performing ballads.”

The first time Malinverni heard Wijnands, “I knew she was special. There’s depth in every note she sings, and every moment is an honest one. All we did for her was to show her support, put her with like-talented young players and singers and encourage her to uncover all her gifts.”

As for Wijnands’ musical influences, “they span very widely. Ella and Sarah, of course. Eydie Gorme, Judy Garland, and Joni Mitchell are big ones. Judy was who I fell in love with when I was very young and tried to mimic — the first song I sang was ‘You Made Me Love You’. Gorme’s voice was so familiar to me because it reminded me of my voice teacher, Anne Phillips. I got more into Joni in college — I was drawn to her not only for her music but also because she was a painter.” — SANFORD JOSEPHSON