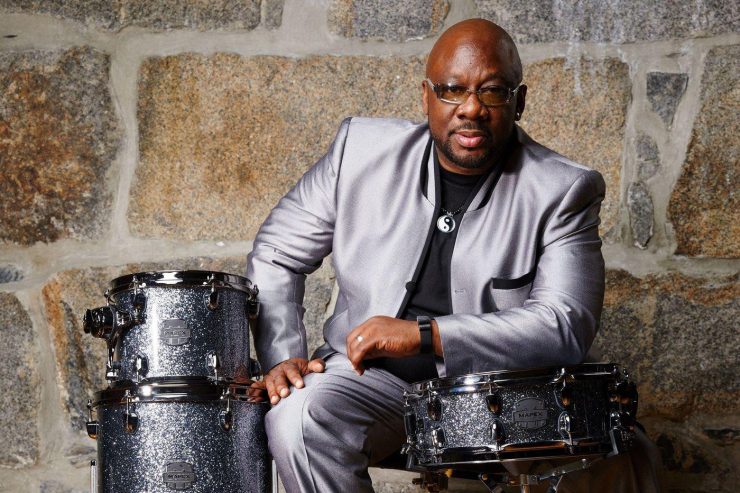 “Some jazz drummers convey the sensation of floating through a groove,” wrote The New York Times’ Nate Chinen in 2016. “Ralph Peterson, Jr.,” he continued, “specializes in a more urgent and pressurized momentum: a runaway freight train, a bronco bolting out of a chute. Thirty years ago, that intensity put him at the center of a hard-bop resurgence. It’s still a potent trademark.”

Chinen was reviewing Peterson’s CD Baby album, Triangular III, which featured his proteges, pianist Zaccai Curtis and his brother, bassist Luques Curtis. Peterson, who died March 1 in North Dartmouth, MA, at the age of 58, was a protégé of the legendary drummer Art Blakey. And, he continued the Blakey tradition of mentoring young rising stars.

One of the young drummers he helped was Nate Smith. On Facebook, Smith recalled an encounter with Peterson 25 years ago. “When I played the Blue Note for the first time in 1996,” he said, “Ralph Peterson, Jr. was in the audience, and he noticed a deficiency in my technique. He offered a five-minute drum lesson that changed my life. He explained that I was playing with my elbow too close to my torso, thereby limiting the dynamic range of my snare drum comping. He gently took my elbow and turned it outward, and I immediately saw and felt a difference. I can honestly say, 25 years later, that I think about that five-minute lesson every time I sit down to play.”

Art Blakey didn’t generally like to work with other drummers in his own band, but Peterson, according to Chinen (now writing for NPR), “was an exception, initially as the second drummer in a Jazz Messengers Big Band. He became Blakey’s protégé — and after the master’s death in 1990, his torchbearer and successor . . . Peterson often emulated facets of Blakey’s style — like a press-roll crescendo on the snare drum, an object lesson in tension and release — with unabashed vigor, confident that his own musical persona was capacious enough to accommodate them.”

Among the many musicians who benefited from Peterson’s tutelage were saxophonists Wayne Escoffery and Steve Wilson, both of whom posted tributes on Facebook. “Not only was he one of the greatest drummers to have ever played the instrument,” wrote Escoffery, “he was my mentor and most importantly my friend. I’m so honored and grateful to have been able to travel the world and make music with him.” Wilson pointed out that Peterson encouraged him to move to New York City in 1987, adding, “He was truly one of the gifted ones, and he was always a great teacher. Ralph had a great reverence for those who came before us, and he carried those messages in his music without compromising his unique identity.”

Peterson battled cancer for six years. He is survived by his wife, Linea; his daughter, Sonora Slocum; two stepdaughters, Saydee and Haylee McQuay; and his “spiritual” daughter, Jazz Robertson.