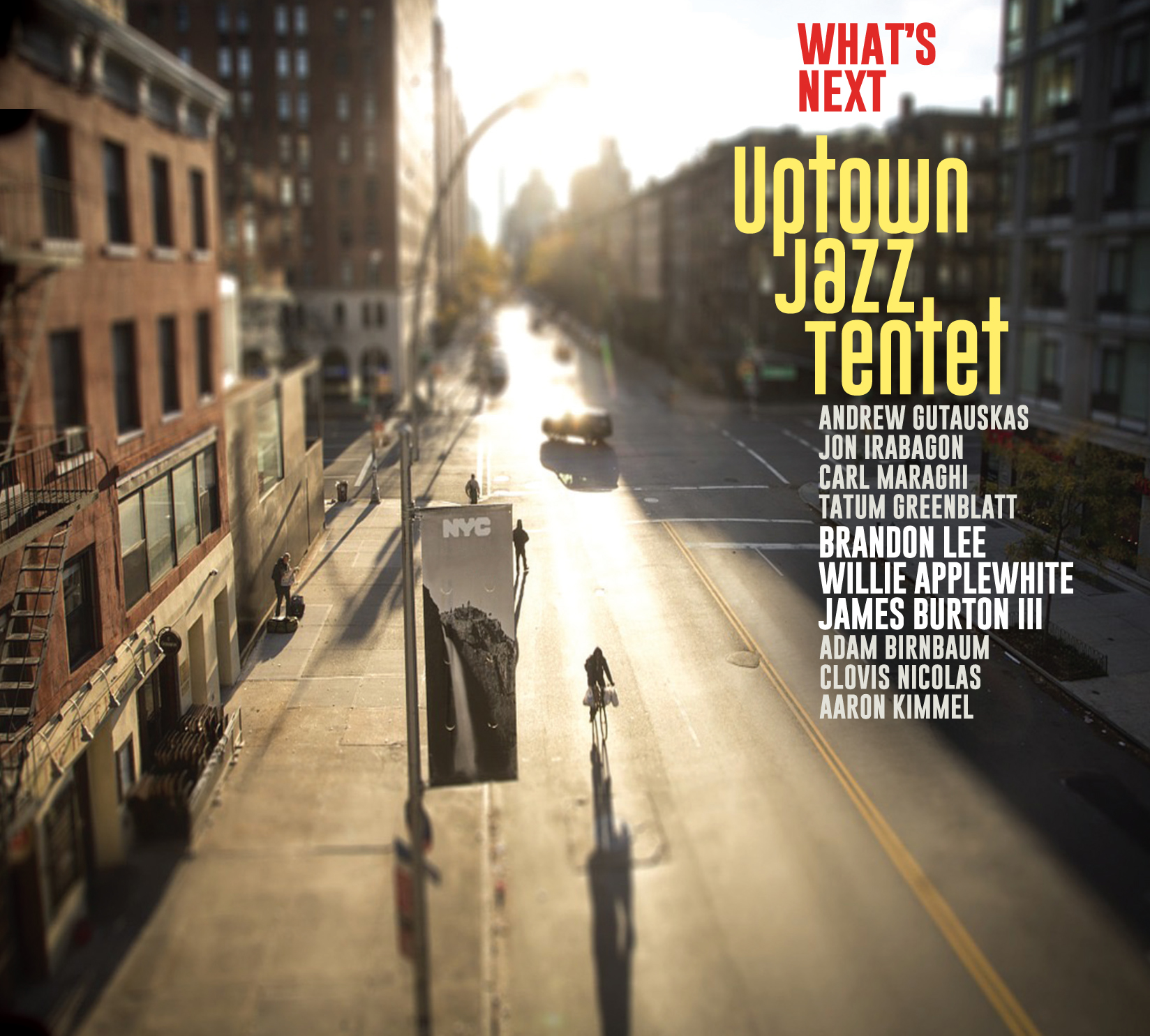 The Uptown Jazz Tentet is a terrific example of the small big band, a bridge between the sound of a small group and a full big band. What’s Next (Irabbagast Records) is a 10-tune collection that mixes original material with some jazz standards. The band is co-led by trumpeter Brandon Lee and trombonists Willie Applewhite and James Burton III.

The Uptown Jazz Tentet is a terrific example of the small big band, a bridge between the sound of a small group and a full big band.  What’s Next (Irabbagast Records) is a 10-tune collection that mixes original material with some jazz standards. The band is co-led by trumpeter Brandon Lee and trombonists Willie Applewhite and James Burton III.  Lee provided three of the originals, Applewhite added two, and the other was composed by trumpeter Tatum Greenblatt.  The additional selections are “SKJ” by Milt Jackson,” “Infant Eyes” by Wayne Shorter, “In a Sentimental Mood” by Duke Ellington, and “Voyage” by Kenny Barron.  The balance of the band comprises Andrew Gutauskas, Jon Irabagon and Carl Maraghi on reeds, Adam Birnbaum on piano, Clovis Nicholas on bass, and Aaron Kimmel on drums.  The intricate and absorbing arrangements are by the co-leaders and Greenblatt. The program covers a variety of moods and styles, all well executed by this excellent ensemble.  Some of the selections will appeal to some ears more than others, but the overall package is consistently engaging.  (uptownjazztentet.com)

Paradise (George DeLancey Music – 002) is a smile-inducing eight-song program by an octet fronted by bassist George DeLancey.  It includes four DeLancey originals plus Oscar Pettiford’s “Bohemia After Dark,” John Lewis’s “Skating in Central Park, Thelonious Monk’s “Locomotive”, and the Kern/Hammerstein classic “All the Things You Are.” For this recording DeLancey is on bass with pianist Tadataka Unno, drummer Lawrence Leathers, Caleb Wheeler Curtis, Jonathan Beshay and Tony Lustig on reeds, Mike Sailors on trumpet and flugelhorn, and Robert Edwards on trombone, with trumpeter Tatum Greenblatt and Ray Cetta on tuba added for “All the Things You Are.” DeLancey has arranged each selection thoughtfully, giving the familiar material fresh approaches and making his original tunes feel like old friends.  DeLancey has created a highly listenable collection that engages the listener from first note to last.  (www.georgedelancey.com)

It is amazing how many outstanding guitarists are on the jazz scene today.  The leader/guitarist of the Henry Robinett Quartet has played many styles of music in his varied career.  Jazz Standards, Vol. 1: Then is a straight-ahead collection of 10 pop and jazz standards that he recorded 19 years ago but is only getting around to releasing now.  After listening to Robinett and his mates — Joe Gilman on piano, Chris Symer on bass, and Michael Stephens on drums — the first reaction is, “What took him so long to share it? “  The tunes are all first rate, “I Hear a Rhapsody,” Yellow Days,” “The Days of Wine and Roses,” “The Way You Look Tonight,” “Ill Wind,” “East of the Sun,” “Invitation” and “Why Do I Love You,” plus Mal Waldron’s “Soul Eyes” and Wayne Shorter’s “Pinocchio.”  Robinett provides a fresh approach to each selection, Gilman adds some marvelous support and nice solo work, while Symer and Stephens are right there with the time.  According to Robinett’s liner notes, he has three more similar releases from that period in the can and plans on releasing them soon.  They will be welcome.  (www.henryrobinett.com)

Vocalist Jackie Allen has been performing excellent jazz vocals for three decades.  Originally from Chicago, she has been living in Lincoln, NE, for many years.  A Romantic Evening with Jackie Allen: Live at the Rococo (Avant Bass) captures her innovative and eclectic approaches to 10 selections abetted by a group that includes Bob Sheppard on reeds, John Moulder on guitar, Ben Lewis on keyboards, Hans Sturm on bass and Dane Richeson on drums. The songs are familiar but not overdone, and include “What a Little Moonlight Can Do,” “Day Dream,” “Lazy Afternoon,” “You Are So Beautiful,” The Way You Do the Things You Do,” “Everything I’ve Got,” “Still Crazy After All These Years,” “My Funny Valentine,” “This Guy’s in Love with You” and “Nobody Does It Better.” Allen has a voice that oozes experience, and her lyric interpretation is always perceptive.  Simply put, the lady knows how to sing and does so superbly.  The album is available as a CD alone or packaged with a Blu-Ray DVD that contains some interviews and other additional material.  (jackieallen.com)

In 1983, following several years of performing Streetsongs (Harbinger – 3604), this enchanting cabaret show by Geraldine Fitzgerald was recorded in performance at Cleveland’s Great Lakes Shakespeare Festival and released on LP.  Thankfully, Harbinger Records has now rereleased it on CD.  The program comprised “songs any of us might sing walking down the street.” It is an eclectic collection that included Irish folk songs, British music hall tunes, a touch of Gershwin and the Beatles, plus a variety of other selections.  She introduces the songs with interesting commentary that adds a special dimension to her performance. Primarily an actress rather than a singer, she is a wonder at interpretation. Her voice is unique, rough and far from classic, but she sings with complete control of her vocal instrument. It does not take long for the listener to get past her unusual sound and become enchanted by her ability to reach out to each listener, grab their attention, and not let go until her performance is concluded.  Streetsongs is simply indescribably delicious listening!  (www.harbingerrecords.com)

After listening to New Sounds from the Jazz Age (Self-Produced) by vocalist Lizzie Thomas, I immediately checked to see if there were any other recordings by her available.  There were, and I purchased two of them. That will give you an indication of how impressive the album under consideration is.  She has selected nine great tunes, “Fascinating Rhythm,” “Love Is Here to Stay,” “I Didn’t Know About You,” “You’d Be So Nice to Come Home To,” “In the Still of the Night,” “One Note Samba,” “Cheek to Cheek,” “Close Your Eyes”, and “The Very Thought of You.” Her choice of musicians is also wise with pianist/musical director John Colianni, who also provided the arrangements, joined by Jay Leonhart or Boots Maleson on bass, Russell Malone or Matt Chertkoff on guitar, Omar Daniels on tenor sax and flute, Bernard Linette on drums and Doug Hendrichs on percussion.  Thomas has a voice and style that lies easily on the listener’s ears.  Check her out, and you will probably be tempted to do the kind of searching that I did.  (LizzieThomas.net)

With a background in musical theater and opera, there is no doubt that vocalist Sue Anne Gershenzon has a trained and impressive vocal instrument.  Making the transition to pop/jazz singing, however, demands more than just a good voice.  The key to artistic success in this crossover is having a special feeling for lyrics and the ability to make each one believable through inflections and phrasing.  Based on the evidence in You Must Believe in Spring (Self-produced), Gershenzon has transitioned impressively.  Wisely, she has chosen a varied selection of good songs and has surrounded herself with excellent musicians led by her pianist/arranger Glafkos Kontemeniotis.  The accompaniment varying from track to track, includes tenor saxophonist Joel Frahm, trombonist Ryan Keberle, trumpeter Brandon Vasquez, bassist Sean Smith, drummer Dave Meade, percussionist Bashiri Johnson and a string trio with Megan Gould on violin, Karen Waltuch on viola and Noah Heffeld on cello. The roster of songs shows that Gershenzon is comfortable with an eclectic mix of recognizable standards such as “Straighten Up and Fly Right,” “The Fool on the Hill,” “East of the Sun,” “Good Morning Heartache,” “When Sunny Gets Blue,” “So Many Stars,” “A Child Is Born” “I Thought About You,” “’Deed I Do” and “You Must Believe in Spring,” with a brief detour to her musical theater roots for a moving ballad by Stephen Sondheim, “With So Little to Be Sure Of.” This is Gershenzon’s first album.  It should not be her last!  (sueannesings.com)