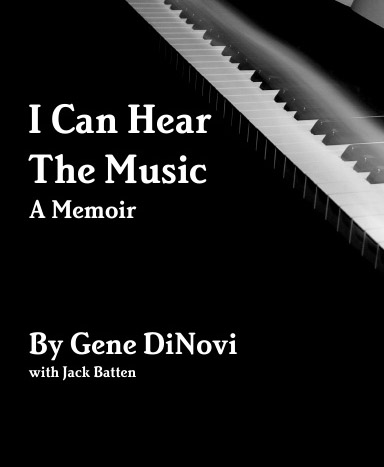 Gene DiNovi’s ‘I Can Hear The Music’

At the New Jersey Jazz Society Jazzfest in 2000, one of the featured artists was jazz pianist Gene DiNovi. Although Brooklyn-born and bred, DiNovi had settled in Toronto in 1972, and his name had little resonance with jazz fans in New Jersey at that time.

At the New Jersey Jazz Society Jazzfest in 2000, one of the featured artists was jazz pianist Gene DiNovi.  Although Brooklyn-born and bred, DiNovi had settled in Toronto in 1972, and his name had little resonance with jazz fans in New Jersey at that time. But once he started playing, all who were present in his venue were enthralled by his brilliant pianism and his genial personality as a raconteur.  The latter aspect of his talent is consistently evident in I Can Hear the Music: A Memoir, an e-book, as told to Jack Batten, that has been online since mid-2016 from Wattpad.com, but which just came to my attention thanks to its being mentioned in Bill Crow’s “From the Crow’s Nest” column in the September/October issue of Jersey Jazz Magazine.

DiNovi has led a full and fascinating life.  He arrived on the scene on May 26, 1928.  There was always music around the DiNovi household, and his brother Victor began taking young Gene to see live big bands at theaters in Brooklyn and Manhattan when he was six or seven years old.  It was not until he was 12, however, that he started to study the piano.  He was enthralled with playing the piano almost immediately, given an introduction to classical music by his early teachers. But he was also drawn to the sounds of the jazz at an early age.

Attracted particularly to the new sounds of bebop, he started to hang out on 52nd Street as a teenager, taking every opportunity to interact with the musicians.  By his mid-teens, he was already having opportunities to sit in with the bebop musicians such as Dizzy Gillespie and Charlie Parker and was determined to make a career out of playing jazz.

DiNovi gives an in-depth picture of how he developed as a jazz player, the musical friendships he developed with like-minded contemporaries such as Terry Gibbs, Al Cohn, Johnny Mandel and Tiny Kahn.  Two players with whom he developed particularly close relationships were guitarist Chuck Wayne and bassist Red Mitchell.  Before he was out of his teens, he was working rather steadily with first rate musicians, playing in both small groups, and with big bands led by Henry Jerome, Boyd Raeburn, Buddy Rich and Chubby Jackson. There were even a couple of brief occasions where he got to play on sessions with Lester Young and Benny Goodman.

One important aspect of DiNovi’s career was his role as a much in-demand accompanist for vocalists.  His first extended experience as an accompanist was for Anita O’Day when he was only 20. He went on to work as an accompanist for Peggy Lee, Tony Bennett and Lena Horne.  The stories associated with the work he did for these great singers are fascinating, and DiNovi explores these relationships in great detail.

Another area that DiNovi worked continuously at developing was composing and arranging.  From his earliest years of listening to the big bands as a child, he was fascinated with the parts played by the different instruments. Becoming proficient at writing arrangements was something that he worked hard at developing.  He seemed to have a natural talent for creating original melodies.

By the early 1960s, DiNovi decided that he wanted to pursue opportunities in the worlds of film and television. Thanks to some fortuitous friendships that had evolved during his various musical adventures, he was able to find some open doors in these fields. His years in Los Angeles proved fruitful as he became active in films and television while also keeping his fingers in jazz and developing some success in writing songs. One of his most frequent collaborators was guitarist/vocalist/lyricist Bill Comstock who spent the 1960s and early 1970s as a member of the Four Freshmen. DiNovi even had a brief collaboration with Johnny Mercer, a relationship that he details in Chapter 29.

DiNovi continued to have occasional work as an accompanist for Mitzi Gaynor and Dinah Shore, among others, but it was a short tour with Carmen McRae in 1971 that had a major effect on his future. The second destination on the tour was Toronto. He developed an instant feeling of comfort in this city, and since he had become unhappy with life in Los Angeles, the lure of Toronto was strong. A couple of further engagements in Toronto over the next few months convinced him that he should move there. He did so in 1972, and has been there ever since.

Since his move to Toronto, the jazz side of his career has been the center of his efforts, but he also continued writing original material, occasionally performing with symphony orchestras.  He has recorded extensively over the subsequent years, in Canada, Great Britain and Japan, where he played many tours, developing an enthusiastic fan base there.

Given the variety of experiences in his life, there is ample material to share with his readers.  He does so in a truly engaging fashion. Jack Batten, the writer who coalesced DiNovi’s story in written form has captured DiNovi’s voice perfectly. Reading the book is like having Gene DiNovi sitting next to you, telling you these stories as you listen. It is one of those books that is hard to take a break from reading. Like eating pretzels, once you get started, it is hard to stop.

Whether or not you are familiar with Gene DiNovi, you will not have to read very much of the book before you feel that you have known him for a long time. The fact that he shares stories about so many people you will be familiar with adds to the pleasure that you will discover as you wander through the story of this exceptional gentleman.